ODA began in 1998 with a crystal-clear mission to work with .dwg files, to keep pace with new releases of .dwg, and set up as a non-profit. "We take care of member needs, and respond to their needs," says ODA ceo Neil Peterson. The first release was R2000 .dwg in 1999 based on Marcomp code, but the quickly began a rewrite. By 2003 it was no longer just .dwg but now had complimentary functions like importing other file formats and displaying drawings.

TIP: ODA uses the word "rendering" to refer to displaying drawings in wireframe on the screen. It does not mean photorealistic rendering. As you will see later, ODA is starting to use the word "visualize" instead. 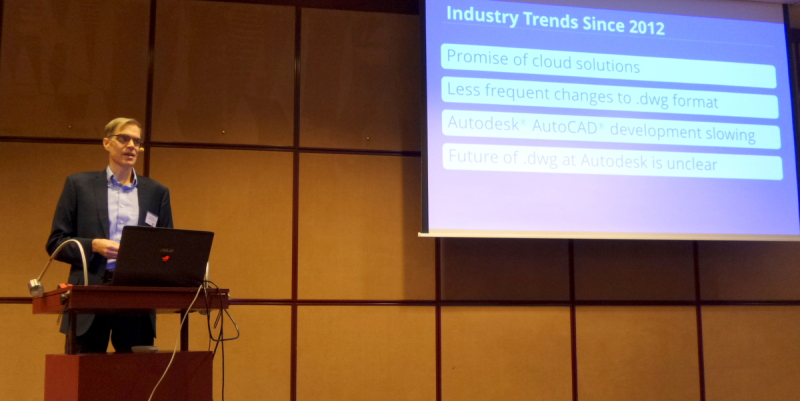 By 2011 most bugs were erased, and now there is a proliferation of Teigha-based CAD programs, with millions of users. There are 1,200 members. To create ancillary products, members need to fund it themselves, such as Civil, BIM, and Mechanical specialties. Some new members have joined only because of the Revit work, and have no interest in Teigha.

"There was some strong talk a few years ago, with the cloud replacing the desktop. We don't see that happening. There is a healthy market for cloud applications, and a healthy market for the desktop market. Interest in the cloud is fluctuating." The ODA is not replacing the desktop with the cloud; they are porting the features to the cloud so that it is easier to develop for both. For the ODA, the cloud is a technology, not a service. They aim to provide visualization (display), markup and full editing, and a client-server setup for other applications.

The ODA sees development in AutoCAD slowing, with the last change in .dwg taking five years. As well, the feature list for recent releases of AutoCAD is getting smaller and smaller.

"We have been here for 19 years, and we want to keep this data accessible for another 50 or more years. We don't know what will happen in 50 years -- operating systems might go away, programming languages might go away -- but we want to keep up with it." The ODA is working on making the code base more modular to make it easier to maintain.

DWG is fundamentally good technology, says Mr Peterson, with few limitations. ODA is working to overcome the limitations, such as version control, multi-user editing (two users can make changes to the same drawing at the same time), and so on. ODA is planning new technology with no extra fees for the cloud, visualization, and publishing.

Posted at 12:56 AM in Travelogues | Permalink