It's being unveiled to the public today at Siggraph, but about 100 journalists got an online preview last week of HP's new Z VR Backpack G1 workstation. Yah, it's a backpack onto which we clip a small Z workstation, don VR [virtual reality] goggles and navigation controls, and then walk about in a synthesized 3D environment. 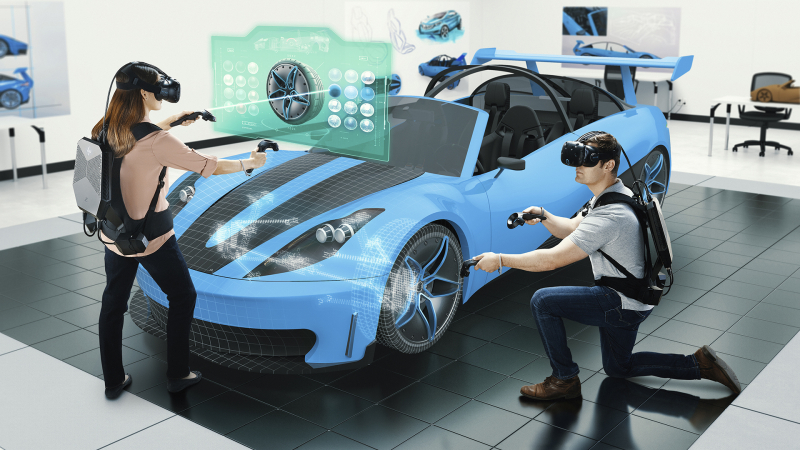 The people are real, the car is not

The backpack, workstation, and batteries are said to weight little more than ten pounds (4.6kg). "Batteries" in the plural, because there are two, so that we can hot-swap one out when it dies after about an hour's worth of of use.

When we need to get back to generating VR scenery, we unclip the workstation and set it into a docking bay on our desk.

The idea behind the portability is to have a very powerful VR viewing system that needs no cables running back to a desk-bound computer, as is the case with Facebook's Oculus viewer. The display is 1080x1200 per eye at 90 fps [frames per second].

The Z workstation boasts an i7 CPU running at speeds as fast as 3.9GHz, with up to 32GB RAM, and up to 1TB disk space running Windows 10 Pro. It holds NVIDIA's new Quadro P5200 GPU with 16GB of memory. Built-in Miracast lets others see on their screens what we see wirelessly. We can use any HMD (head-mounted display), although HP recommends HTC's Vive BE or their own HP Mixed Reality Headset. The box has no expansion slots but lots of ports, including 4x USB 3.0 and a Thunderbolt port, HDMI, miniDisplayPort, and HMD power port for the headset.

The starting price is $3,300 and the backpack system is due to ship in November.

Who Is This For?

Nevertheless, they feel the commercial VR market will be even bigger, a claim I find even dubiouser. Nevertheless, HP sees opportunities in theme parks and product showrooms, among custom designers, in training centers, and with faster prototyping. They see CAD users designing products with HP's Z workstations, creating VR, and then experiencing it -- all their their hardware.

To supplement the new equipment, HP is creating a dozen or so VR Immersion Centers, kind of like an Apple store for trying out HP's VR system.

To further supplement the new initiative, HP got together with a few other hardware and software vendors to imagine human life on Mars in buildings and on farms -- with a population of one million "in the not too distance future." I suppose that real-world challenges on back on Earth, such as housing and farming to prevent mass starvation in the South Sudan, is too realistic to solve here at home.

VR is, after all, about what isn't.

Posted at 01:00 AM in Computer-aided Design: NEWS | Permalink