« There are Four Androids | Main | foto of the sunday: dresden cathedral »

Recovering from a smashed smartphone

Set Up Nearby Device

The worst thing in life is being punished for doing a good deed. I spent most of four days last week stripping wallpaper and painting my mother-in-law's bathroom. Listening to Radio Paradise on my smartphone, it fell by itself five feet from the window ledge onto the ceramic tile floor below, smashing its Gorilla 3 glass spectacularly.

I found that the UMI Super phone and its display still worked; only the touch aspect was gone -- plus the glass featuring dozens of cracks. Why did the glass smash -- even though it had an extra protective glass overlay? I had a case for it, but it did not extend to the front of the phone, so there was no bumper action to protect the glass. The Super is thicker than most phones, due to its 4000mA battery.

It was irritating, but not a horrible loss. My mother-in-law gave me her Motorola G, which she never used  (and we were getting her a flip phone replacement anyhow, which she now loves). I had a spare UMI Super back home, which I would now employ.

I needed to get all my files off the broken phone, so I connected it to my laptop. From file manager, I accessed all its files, and copied them over

TIP: It is much faster to copy each folder, one by one, than to copy all folders in one action. For some reason, copying all stalled something, causing Windows to proclaim the process would take 23 hours. When I copied the files folder by folder, it took just ten minutes over the USB3 connection.

But there were still other files to copy, once I made back ups from inside individual apps. How to use the phone when the screen no longer responded to touch?

To control the phone, I plugged in a USB-C to USB-A adapter, and then plugged in the wireless transmitter plug that Logitech provides with its wireless keyboards. (See figure 1.) I probably could have used a wired keyboard, but I keep a couple of spare Logitech K400 keyboards around, because they include a trackpad (for mouse usage). 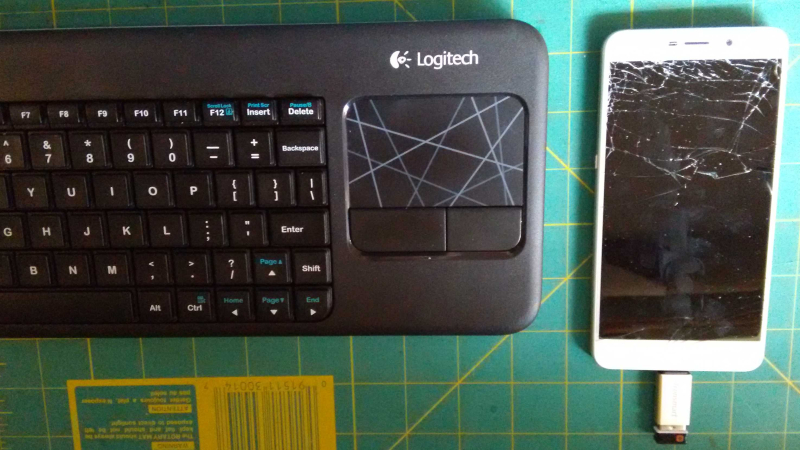 Figure 1
At bottom right, an adapter allows the wireless transmitter to be attached to the smartphone

Android recognizes the mouse/trackpad as if you were touching the phone's screen, but there are some differences. For example, it shows a cursor arrow when the keyboard is attached.

The tricky part is dragging. I found I could do it by holding down the trackpad's pick button (left button), and then dragging my finger along the trackpad. Not easy, and sometimes there are mispicks, but it is doable. Google does have some keyboard shortcuts, such as for going to the Home screen, but they require I first press a Search key, which I don't know about.

Copying From Old Phone to New One

Google includes a utility to copy settings and apps from your old phone to the new one. It is found in the Settings app: swipe down until you reach Google, and then swipe down again and tap Set Up Nearby Device. It uses Bluetooth to locate the nearby device, sends some code numbers back and forth so that you can confirm it is the correct one, and then uses WiFi to install all the same apps.

It does not, however, copy all settings, which I would have expected. Most irritating one of these is the settings my my K-9 mail app. Other settings are also not copied, such as ones  specific to the phone, as customized by the manufacturer; for example, the UMI Super lets me switch the locations of the (soft) Back and TaskManager buttons. Google cannot copy over settings for Opera Web browser, because Opera stores those itself on its own servers.

To solve the problem of settings missing for apps like K-9, I can go into each app, use the app's backup option, save the settings file to the smartphone storage memory, and then copy the file to the new phone. (Repeat these steps for each app that allows you to save its settings.)

There are a several ways to copy the settings files:

Once you have the files on the new phone, move them to the folder used by each app to store its settings.

For example, K-9 has a menu item named Settings Import & Export, which saves its settings to folder /storage/emulated/0/com.fsck.k9 in the file settings.k9s. Naturally, you need to have a file manager app on your new phone to move the file to the correct folder. I use File Manager HD from Cheetah Mobile.

TIP: Sort files/folders by Most Recent (or by Date>Descending) to easily find the folder in which the settings were saved.

Once I imported the settings file into K-9, all it needed from me was the password to my email account. Some email accounts use two-factor authentication, like GMail, but K-9 does not; in this case, you can get Google to generate a one-time password that bypasses the limitation:

Copying over the settings for the launcher app left out widgets. My todo software doesn't appear to have an export function, unhappily. So there is still a few hours ahead of me to make the new smartphone as smart as the cracked one.

Thank you so much for this greatly discussed topic. A lot of people have experienced this unfortunate moment. Most of them just leave the phone dead and useless without even assessing how bad the damage is or what else can he/she do with that phone.