[Our coverage of this event earlier in the day was curtailed due to the WiFi failing to connect to the rest of the Internet.]

BIMx is the name of Graphisoft's mobile app for viewing 3D models. It has probably the nicest user interface of all the ones on the market. It uses what Graphisoft calls a "hypermodel," which contains the 3D model, 2D drawings, viewpoints, and so on. 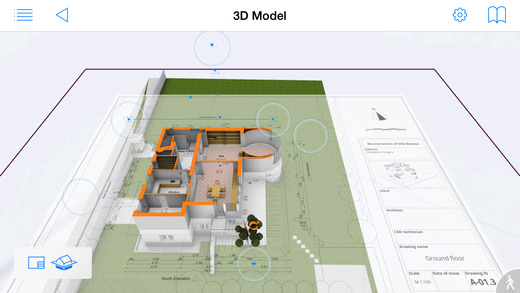 Hypermodels can, of course, be brought over from the desktop to the mobile device using a cloud storage service (like Dropbox) or a direct connection. But to share models with others, such as the on-site construction manager, BIMx now supports NFC [near field communications] and so will send the model to nearby devices (like sending a file via Bluetooth).

But this is practical only for a one-time transfer. What about when the model is updated the very next day? The new BIMx Model Transfer service now solves this problem: upload file to Graphisoft site, and then after this Graphisoft's patented technology uploads only changes.

Everyone gets access to public storage; subscription users get private storage. Push notifications are generated when changes are made to the model. With the notification, you can optionally download the updated model.

BIMx and ArchiCAD can send each other messages. On mobile devices, push notifications alert users to incoming messages, sorted by model (project).

3D models now get a kind of watermark in form of architectural credit. It displays full screen as the model is being opened, and then glides to the corner of the screen.

BIMx now supports split screens on iOS and Android devices running the newest version of the OS. For instance, in a Web browser select a model and it is opened in BIMx.

Graphisoft recognizes that mobile devices are limited in the amount of RAM, and so are limited in the size of 3D model BIMx can display. This is particularly true with iOS devices, which typically sport a mere 2GB RAM, although iPad Pro has 4GB. The latest high-end Android devices offer 6GB RAM. So, how do mobile apps display very large models?

Graphisoft is working on the next version of BIMx to handle all buildings in a complex or a city -- instead of, say, just one building. This will be done with streaming, where it displays only the portion you are looking at, such as looking westward, or inside a building, or under water. All other polygons are discarded.

[Disclosure: Graphisoft provided me airfare, hotel accommodation, some meals, and a corporate gift -- a bottle of sake.]

Posted at 11:05 PM in Travelogues | Permalink

Is it possible to save camera angle and coordinates within the BIM player?