I have a ton of hard drives, well a dozen or so, that I've liberated from old computers and laptops headed for the dump -- er, recycling facility. Removing the drive is the only way to ensure no private data gets liberated in its own way. I also have several spare drives from replacing hard disk drives with solid state ones. Some of them I put into external drive enclosures as portable drives.

But then I saw something called a docking station. It has one or more SATA slots, into which I could just plug in one or two drives -- 2.5" or 3.5". That would be much easier than putting then in and out of external drive enclosures.

The model I bought is Inateck FD2002. For $50, it has a USB 3.0 connector, external power supply, two slots, and the ability to clone one drive from another. "Clone"means that the content of one drive is exactly reproduced on another one -- including the OS. This is useful for corporate environments where all computers should have the same software.

Doing this externally to my desktop computer allowed me to get all this done, without having to open the top of my main work computer -- not until the new hard drive was ready to install.

Offline Cloning. The second job was to upgrade my wife's computer to Windows 10 and replace the slow hard drive with a fast solid state drive. I figured if I cloned the old drive, I would have less chance screwing things up doing the update. After all, I now would have two chances!

I pulled the old drive out of her computer, stuck it into the docking station, and inserted the solid state drive, as well. The station did not need to be plugged in a computer; just into the power. To clone one drive to the other, I followed this procedure: 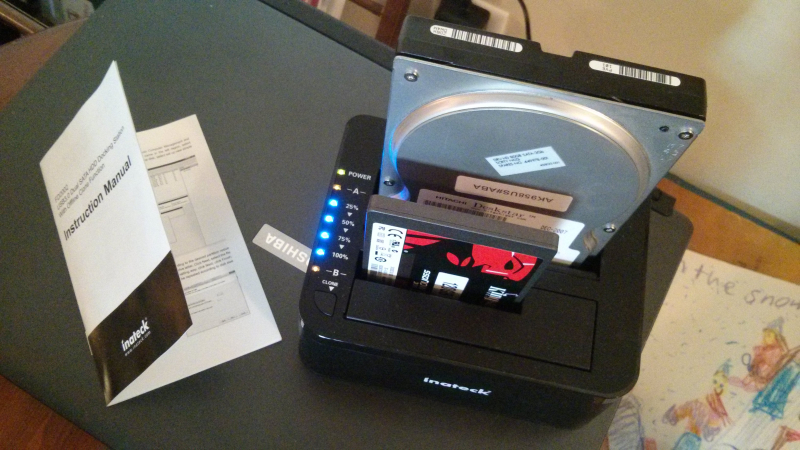 Figure 1
Inateck docking station cloning one drive to another

As the source drive was a small 80GB drive, the process took only a few minutes. Then I discovered that the cloning process is a true clone. On the 120GB SSD, I found that there was an 80GB partition, and a empty 40GB partition. (All numbers nominal.)

I put the SSD into my wife's computer, but was irritated by the loss of 40GB. But I am nervous enough to not play around with moving partitions. I decided on the manual course of action:

b.    Install Windows 8.x on the new drive, which I had purchased as a full version a few years ago, and still had sitting around unused.

d.    Copy files from the old drive to the new one.

Fortunately, my wife uses her computer mostly for Web browsing, email, and some office work, so there were not many files to copy. The My Documents folder was it, plus reinstalling freeware, like Google Chrome and LibreOffice.

The convenience of the docking station is well worth the modest price.

Interesting and well explained. Thanks!