Makes too much sense 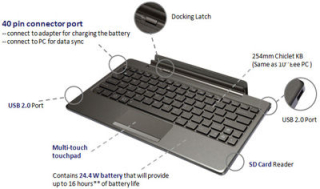 line -- a tablet with a detachable keyboard, the keyboard housing additional ports and a second battery. The TF is short for transformer. I own(ed) one, but it is now so old that it is too painful to use anymore.

To my great puzzlement, this format never came to dominate the world. It just makes sense: a proper keyboard, full-size USB, SD, and other ports, and a second battery that not only doubles the tablet's run time but doubles as the counter-weight to keep the tablet from tipping backwards -- and all of this optional.

Indeed, the battery lasts so long on the TF-100 series that I would use it to top up the charge on my smartphone. The one negative: ASUS used a proprietary charging connector, not the standard microUSB.

One Chinese vendor of tablets resurrected the idea, and so I ordered it. Curiously, the tablet had to be ordered separate from the keyboard. After the tablet arrived, the vendor told me that the battery-enabled keyboard was no longer available. I returned the tablet.

I recently got a 12" tablet with detachable keyboard. No battery in the keyboard, unfortunately, although it does sport two full-size USB ports. But here's the thing: the tipping problem. The vendor made the keyboard heavy (lined with lead?) so that the tablet would not tip; why not stick in a battery to provide the weight?

Hmm, maybe the extra battery adds too much cost and weight for the marketing folks....after all, thin and light is "in", right?

The Microsoft Surface Book uses this approach, with crappy battery life without keyboard (<4 hours), but excellent battery life with it (and some models also have a GPU in the tablet). Also, the Lenovo Helix 2 and Dell Venue Pro had keyboards with batteries available (and supposedly some Helix 2 models have the tipping problem).