My dual-boot tablet stopped working. Dead. None of my revival techniques worked on it, and so it was time for a new tablet that boots into Android and Windows 10.

As I perused the possibilities, I came across the 12" tablet made by Chuwi. There are very few 12" (or larger) tablets around, as mass production to keep prices down dictates that 7", 8", or 10" screens be employed, whether by a generic brand or by Apple. 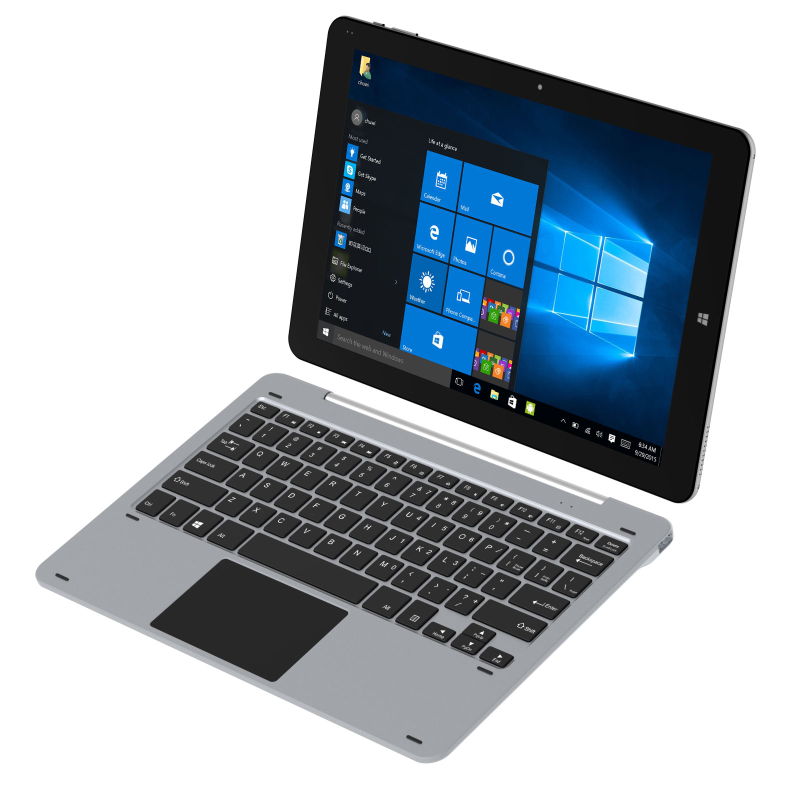 The Chuwi Hi12 is a dual-boot tablet (Android 5.1 and Windows 10) with an optional keyboard. I paid US$240 for the tablet, plus another $40 for the keyboard. They were shipped separately, with the keyboard arriving two weeks before the tablet, annoyingly enough!

The tablet has these specs:

It also has WiDi (wireless display), Bluetooth, and 802.11b/g/n WiFi. The vendor says it is "3G capable," but this is only possible when you attach a dongle. The only sensor is gravity (for rotating the screen); no GPS or any other one.

It is the Intel CPU that allows the tablet to run both operating systems, as well as provide 4GB RAM to Android. The 64GB of storage RAM is split into 44GB for Windows and 20GB for Android.

I never use the camera on tablets because the tablet is awkward to use and usually take unpleasantly grainy photos. The front camera is useful for Skype sessions.

In the figure below, left to right, the ports are:

Ports available; the other side of the keyboard has one more full-size USB port (image source northernblogger.com)

Keyboard. The primary reason I like a keyboard dock for a tablet is so that I don't need to hold the tablet. But I am disappointed that this keyboard does not contain a second battery.

The keyboard isn't perfect for a high-speed typist like me, but the keys have sufficient travel, albeit they wobble a bit side to side. Given that, the Hi12 has a better thin keyboard than most other ones meant for slim laptops and tablets.

I like the black keys with white lettering, but I find the "space" gray color of the tablet itself to be quite ugly. The keyboard is not lit. Sadly, none of the function keys work with Android; just Windows.

The connector between the keyboard and tablet limits the angle to prevent tipping; Chuwi says it goes 30 degrees back from the vertical. This means it does not lean back as far as I prefer -- I want the screen to be 90 degrees to my face. On the other hand, the tablet can be inserted reversed so that the keyboard is at the back. This is useful for watching movies on airplanes, because it keeps the screen further away from the seat back.

Battery is claimed to be 11,000mAh, which contributes to the heft of the tablet. Actual life is about 6 hours. The charger delivers 3A, which is needed to fully recharge the battery; even 2.5A chargers (supplied with most other Android tablets) are insufficient.

The vendor sent a charger meant for British outlets (mains), and threw in a North American adapter -- very annoying! The charger is big (to handle 3A output), the adapter is just as big, and wobbly in its connection. I use a heavy-duty elastic band to keep the two together, but have since ordered a 3A charger separately.

Sound. The stereo speakers are effective, I get stereo effects watching movies. The speakers are the loudest I have ever experienced with an Android phone or tablet, which means I don't have to turn on sub-titles.

Screen. The 12.2" screen doesn't feel big, perhaps because laptops usually have even bigger screens. It is not as bright as I would like it to be, but is sufficient for office environments. My biggest irritant with this tablet is that the touch screen is not responsive to light taps: I have to tap hard for it to react to my touches.

Ports. I feel good that the Hi12 sports lots of ports, even though in practice I find I rarely use most of them. I inserted a 64GB microSD card (they are so cheap these days!) for large files, like movies. The tablet offers to format the memory card. The card's capacity is shared by both the Android and Windows sides.

The Windows "button" on the tablet's bezel works in Android as a home button, which is handy. Separate utilities provided by Chuwi reboot the tablet to the other operating system. Windows gets updates from Microsoft, but Android does not get updated by Google.

Speed. The CPU is fast enough for nearly all operations; the one weird exception is the Web browser in Android mode: it loads Web pages shockingly slowly as compared to the same Web browser (Opera) on similar-speed phones and tablets.

With this being a tablet, I don't have to worry about blocking air flow vents, as I would with most laptop computers in my lap.

Compared With My Laptop

The title to this blog entry says this tablet-keyboard combo is $1,000 cheaper than my regular laptop, an HP Spectre X360. What do I get in the laptop for spending $1,000 more?

In many other areas, there is no difference or differences that even out:

Would I buy a Hi12 knowing what I know now? No, because of the screen's lack of sensitivity to touch, and the unit's heavy weight. Still, it is useful for watching Netflix!