My first two days with my new $200 superphone

As this is the weekend in Barcelona where the world's biggest cell phone makers unveil their new $800 superphone models for 2017 -- with the exception of Apple and Google, who always skip MWC -- I thought it is fitting to write about my new $200 superphone.

Every so often, a product line reaches a peak, and then begins to fade. First time I experienced this was with a cassette tape deck in the mid-1970s. I bought a Hitachi D-850, which for me was as perfect a design there could ever be -- even down to the light-yellow tint of the level meters. When after five years of hard use I bought a replacement from Sony, I was devastated at what had been removed to make production cheaper -- yet sell for the same price.

Same occurred for VCRs, DVD players, laptop computers... And now we are starting to see it with smartphones, where vendors save a few pennies by removing the headphone jack, and so on.

Same occurred with UMI's line of smartphones, where the latest Z model touts fewer features than their older Super model. The Z has a faster CPU and dual cameras, but smaller battery, takes nanoSIMs, no function button, and costs 40% more. Like I said, we're post-peak.

How I Found the UMI Super

I am a fan of good cell phones at a moderate price. I figure a moderate price is $200, the price of the Moto G I recommended for my wife and her mother. My last cell phone was the Nexus 4, which cost me $250. Now, however, the tech media has decided that mid-priced cell phones should be $400. Analysts are wondering if Apple will jump the shark by releasing their 10th Anniversary model with a base price of $1,000.

I needed a new cellphone, as the Nexus 4 is now more than four years old, officially. Mine was shutting down spontaneously, ran slowly now, no longer took videos ("cannot connect with the Camera app"), and anyhow took ugly photos. I wanted an up-to-date phone that took fabulous photos and cost $200.

So I was pretty excited when I came across the Leeco S2 on eBay. It had high-end specs and cost just under $200, with free shipping. I ordered it right away. Only later did I bother to more closely peruse the specs, and was bothered by what I found: no headphone jack (although a USB-C to 3.5mm adapter is included), no notification LED (just an LED to indicate charging status), but most disturbingly, it required nanoSIM cards (it takes two of them).

I use three microSIM cards, for making calls while in Canada, USA, and Europe. I wasn't fond of having to chop them down in size. As a solution, however, I then bought a SIM card cutter ($10), as well as a couple of case (a few dollars each).

The specs continued to irk me until I found another solution: I learned that there were other $200 superphones on the market. Searching eBay, I settled on the UMI Super. It had none of the design flaws of the Leeco. I ordered it mid-December.

The SIM cutter arrived. The cases arrived. The Leeco didn't. After two months, the Hong Kong vendor refunded my purchase price, as per eBay regulations.

The UMI Super didn't arrive from Hong Kong, either, and so I am in the process of getting a refund from the vendor. I wondered if the phone might be available closer to home, and was dismayed (and delighted) to find a vendor on Amazon.ca selling them for the same price, but shipped from Canada.

And so it was that last Friday, Canada Post delivered two packages. One held the UMI Super I ordered from Canada the week before; the other the Leeco S2 I ordered three months earlier! (I now have to contact the seller to see what happens next, as he had refunded me my payment.) Nevertheless, as a geek, I was joyously overwhelmed by having two, Two, TWO high-end cellphones on my desk simultaneously! 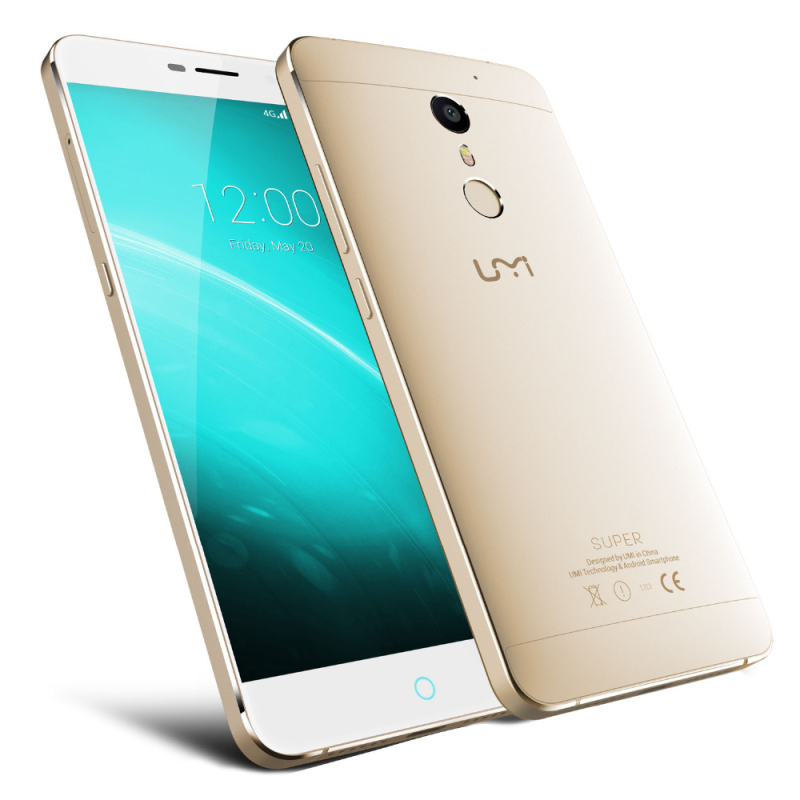 I had ordered both in gold color, as I find space gray too depressing and rose gold too weird. The Leeco came presented nicely in a white cardboard case, while the UMI arrived in an impressive black metal case that looks like cool cookie tin. Both phones include a fast charger, USB-C cable, and SIM pin. The Leeco also includes a USB-C to 3.5mm audio adapter, which the UMI does not need. Instructions are minimal, and mostly in Chinese. Leeco has a one-year warranty, the UMI a two-year -- although I don't know how I would ever collect on them.

It did not take me long to reject the Leeco with all finality. The last straw was this: I customize my home screen with apps like Atom Launcher. Leeco has their own launcher app called EUI (Ecosystem User Interface) that (a) cannot be customized and (b) cannot be replaced. To me, this is as awful as owning an iPhone. Even worse, EUI does not access Android functions from the notification bar; all that the notification bar does is display notifications from apps. (UMI Super runs pure Android, and so can be customized.)

(You might recall that Leeco did a big launch in USA last year, which included a failed electric car presentation. The company, which was the first in China to go public, is now suffering financially.)

And so I officially gave up on it. A missionary friend, whose Android is ancient, is interested in taking it off my hands. I'll give it to him, and settle with the vendor.

To read the full specs of the Leeco, see here: http://www.gsmarena.com/leeco_le_2-8053.php. Despite the design being nearly a year old, it nevertheless boasts the world's first 10-core CPU, running at an impressive 2.3GHz.

About the UMI Super

Readers of my blog have been asking me about the UMI Super, and until Friday I've had to tell them, "Sorry, no phone." Now that I've experienced it for two days, here are my initial impressions.

First off, it is as good as I expected it to be (with minor caveats). Within hours of starting it, it received two updates from UMI, and then a big 1.2GB update which turned out to be Android 7.0. For the full specs, see here: https://www.gsmarena-mobile-phones.com/product/umi-super

Here are the highlights that set this phone apart from competitors and the Leeco:

Battery life: I haven't had the phone long enough to judge battery lfie properly. The big battery does not make the phone much fatter than most others, and only slightly heavier.

The phone arrived from the Canadian seller to a Canadian customer with the European plug on the charger. I've asked the seller for a replacement, and the meantime I am using an adapter. The charger is special, in that it does fast charging, where 12V is sent to the phone, instead of the standard 5V.

Function button: This is an extra button that normally is assigned to activate the camera app, but it can be assigned to any app. But I wish pushing the button would also turn on the phone.

Notification light: The LED does indeed fade in and out as a circle. It not only reports notifications (with customizable colors), but also indicates charging status: pulsing red for changing, steady green for fully-charged.

SIM tray: The SIM tray holds two microSIM cards, or one SIM card and a microSD memory card. Right now I have two SIMs in there, as 32GB is already 2x more than what I had before. The phone can use both SIM cards at the same time. However, only one SIM can do 4G (LTE) data, while the other is limited to 2G data, as is common among phones today. Dual-SIMs are really handy when traveling, no need to fumble swapping cards in the cramped airplane seat. Each SIM can be turned on and off through software.

In other specs, this phone is normal:

Speed:  I am no longer frustrated at the slow speed of my old Nexus 4. Downloading apps happens in a flash!

TIP: Install the Widgetsoid app, and one of its customizable notification buttons lets me manually set the CPU speed. Lower speed extends the battery life.

Operating RAM: While some phones now come with 6GB RAM, I find that 3-4GB is sufficient.

Storage RAM: 24GB is available for storage, the rest is used by the operating system.

USB-C: This is an irritant, despite its benefits. When microUSB years ago became the standard, I put in microUSB charging stations all around the house and in the car. Now I have to duplicate the effort by buying additional USB-C cables and adapters.

TIP: I thought at first that the UMI Super had a bad USB-C port, as the cable would not stay in properly, interrupting charging. Then I found I needed to push harder: first insert the connector, and then push hard to lock the cable into the port.

Screen: The 1776x1080-resolution screen is not as high as with other superphones. This high a resolution is sufficient, and also an advantage: lower resolutions mean longer battery life. My only big beef with this phone is that it is not bright in direct sunlight; the Leeco screen is brighter.

The UMI vendor applied the safety glass on top of the screen at no extra charge; the Leeco vendor included a clear, soft plastic case for free.

The speaker is loud, but distorts slightly at top volume.

Yah, for two hundred bucks I am pretty satisfied.

...meanwhile, out there somewhere in the global postal system, a second UMI Super is wending its way here. I think.

This is possible when the cell phone maker runs pure Android on their phones. They don't need to spend time adapting their unique UI to the new release.

And what do you think of the camera(s)?

At this point, the camera is the primary problem. It does not focus at infinity. On the UMI forum, people are saying this is a software problem. I wonder if it is specific to Android 7.0; I did not have time to test it on Android 6 before the update to 7 came along.

Do you know if the phone has Bluetooth 4.0?