« foto of the sunday: Early Rising Birds | Main | How long does it take to put on a CAD conference? »

HP last week gave about 70 of us media people a preview of its new Z-series workstation. "Z" means computers meant for users of high-end desktop software, like mechanical CAD design and movie editing. This one is called Z2 Mini G3 -- a riff of Apple's Mac Mini.

HP product managers were pretty huffed up about the angular design (see figure 1), which is a problem for me, because I like rectangular black boxes. The more rectangular and featureless the better, and silent -- like my six-year-old Acer desktop; think monolith from 2001, but fatter. 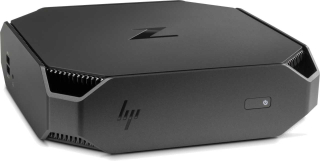 Figure 1
The tiniest Z workstation has angular lines and is 2.3" tall (all images sourced from HP)

Nevertheless, I got their reasoning for the angular air vents: it's hard for a piece of paper to cover them up, suffocating the computer that's jam-packed with components and fans.

Indeed, the two of the largest components inside are fans. See figure 2. Two large ones to move lots of air; but also of large size to move that air quietly. A bigger fan turning more slowly is quieter while moving equivalent amounts of air as faster, smaller fans. 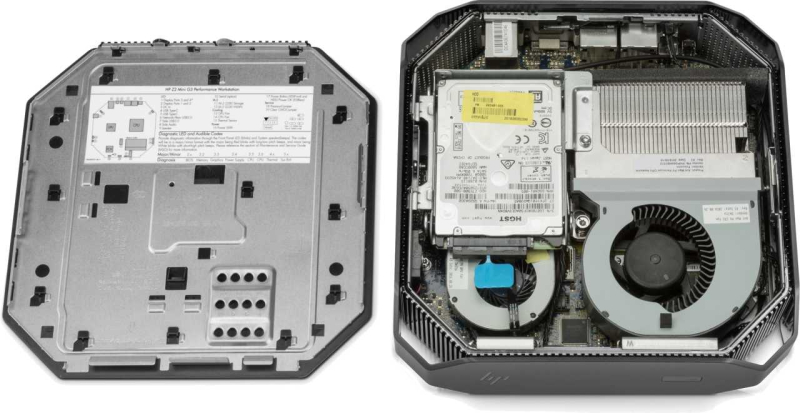 Figure 2
Inside the Z2 with its two fans

HP made it sound like mounting their new baby on the back of a monitor or on the underside of a desk is a new thing, but VESA mounts have been standard for lots of years now. Look at the back of your monitor; it probably has four holes. That's the VESA mount for ultra-small computers.

HP also made it sound like some other features are brand spanking new advances in the field of workstations, but what they did was adopt laptop technology to a desktop computer. Such as pressing a key (on any brand of USB-connected keyboard) or a mouse to turn on the computer. Another such as: the graphics board is an M model, meaning mobility, meaning laptop. What isn't laptop-y about it at all is its ability to handle six SIX! monitors. See figure 3. 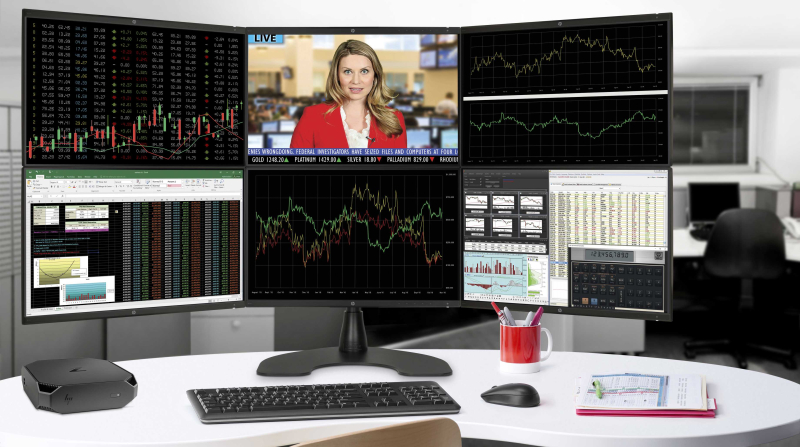 Another laptop issue is how they can walk off the premises. For security, HP offers an optional steel box that encloses the Z2 with a padlock; rotate it by 90 degrees, and the USB ports are blocked, as well. See figure 4. 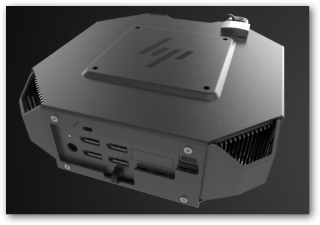 When it starts shipping in December, the box will come in a base i3 model for US$700 and then offer the following options:

My advice: get at least an i5 CPU in any computer. Good news: the RAM and hard drive are user-replaceable, unlike the products from a certain company whose name starts with A and ends with -PPLE.

Q: How is the graphics board upgraded?
A: You need to replace the motherboard.

Q: What kind of serial port is available?
A: It is a 9-pin serial port that uses an analog signal that cannot be hacked digitally.

Q: Is the M620 graphic for desktop computers or a mobile GPU?
A: It is a new mobile GPU from nVidia.

Q: How can HJ compete with Apple?
A: We are going after CAD-focused designers, who Apple has abandoned, such as users of AutoCAD, Solidworks, Revit, and ArchiCAD.

Q: How does the power-on work?
A: The remote power-on function is in the BIOS, and works with any USB keyboard on the market. You can click the mouse or press a key on the keyboard. It is initially disabled in the BIOS so that the computer doesn't exhibit unexpected behavior, so you have to go into the BIOS to turn on the features.

Q: How large is the power adapter?
A: There are two power adapters, the same ones as used for some HP laptops. One is 200W for the nVidia graphics and the other 135W for Intel graphics.

Q: Is it difficult to replace the SSD (solid state drive)?
A: The memory is the most tool-free part of the system; you need to just remove one screw to replace the hard drive.

Cute, but don't really see the point of compromising to get a small form factor with a desktop machine.

Hence my question to HP: how does the nVidia graphics get upgraded.(Their response: replace the motherboard, which means it won't happen.)

Prior to unveiling this new workstation, they did a prelude presentation that there are 2.9 million CAD users without a workstation. So I guess they figure that's their market.

I can see it as a secondary computer. I have a second Windows desktop on a side table -- an all-in-one that can't be upgraded, which is useful to do things when my primary computer is occupied.

PC World suggests that this is HP attacking Apple's Mini Mac, which I also have as an unobtrusive Mac, which I need to use only once in a while. It shares the monitor with the all-in-one.