« For its future, Autodesk copies from Dassault | Main | foto of the sunday: Scene from an art studio »

Following the results of the recent US federal election, the mainstream media was filled with outrage from the elite whose candidate failed to earn sufficient electoral votes.

PacketSled ceo Matt Harrigan, for example, threatened to assassinate the president-elect. On Facebook, and on multiple times. Following his outburst of freedom of expression, he resigned from his job and his company reported him to the Secret Service, whose job is to investigate threats against presidents and presidential candidates. PocketSled's software -- which does continuous monitoring, threat detection, and network forensics -- apparently did not detect the threat of the founder's bellowing on a popular network.

Others from Silly-con Valley tweeted their post-election outrage and disgust at what democracy had delivered. Tech firms, with their Constitution-free T&Cs and click-or-screw-off EULAs, aren't familiar with not getting their way.

Most elite and their mainstream media fellow travelers knew that it was Hilary's turn to rule the country. At least, that's what they kept telling each other and the pollsters. Unless, of course, they happened to read the L.A. Times' polls, which used a different polling method to find that His Trumpness would win. (Most polls use randomly selected people with each poll; LA Times used the same people for each poll. The difference in margin of errors is a fascinating topic to peruse.)

One assumes this was the poll Autodesk ceo Carl Bass was following when he tweeted his disgust in late September, well before the poll day of early November. The prophetic tweet was recently retweeted by engineering.com journalist Roopinder Tara as a reminder that Mr Bass got the prediction right, but...

The Mercury News is the newspaper of record for Silicon Valley, and it put words to the thought that perhaps the tech industry needs to understand what a Republican federal government can do for it. Since then, the Apple ceo has met with the president-elect, as has the head of BET, and others. 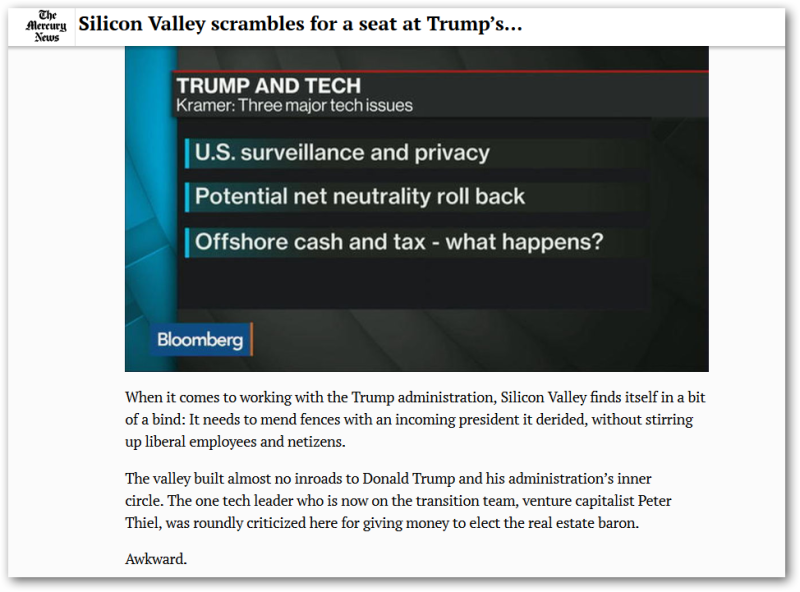 Mr Trump, a fellow businessman, has, for example "proposed a 10% repatriation tax on profits of U.S. corporate foreign subsidiaries, down from the statutory 35%." (Source.) Autodesk would, it seems, benefit from a Republican president, as it keeps 86% of its cash and investments offshore (as of July 2016).

Posted at 03:00 PM in Behind the Story, CAD: Financials | Permalink