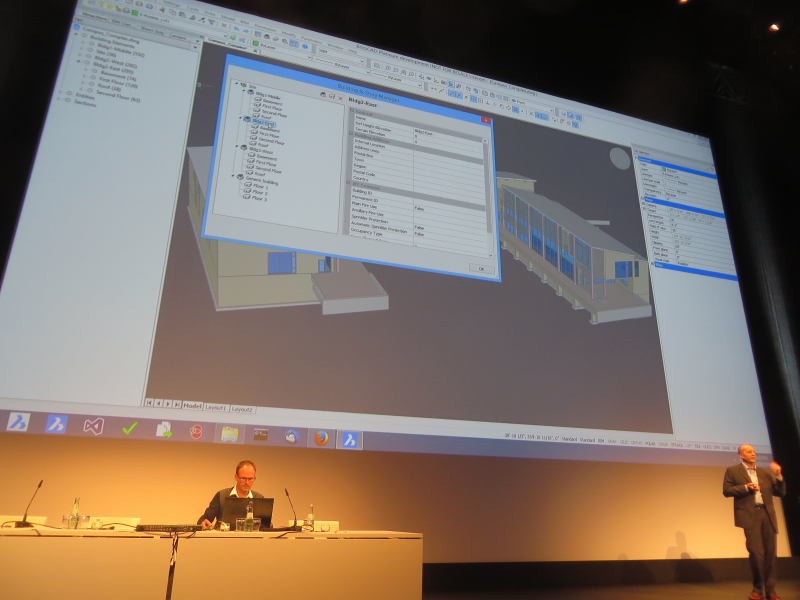 This partial list of new BIM features in BricsCAD V17 is provided by Bricsys. They are in alphabetical order, followed by improved functions. For the full list, look at https://www.bricsys.com/common/releasenotes.jsp?i=4471

A SITE WITH MANY BUILDINGS AND STORIES

To give you greater flexibility in developing BIM designs, a single drawing file now contains a “site,” which can have multiple “buildings,” with each building holding one or more “stories.” The default drawing holds one building with three stories. You specify properties for the new site, building, and story elements.

The new bimPatch command allows you to specify a rectangular area on a block that you previously generated with the bimSectionUpdate command. When you use bimSectionUpdate to regenerate the section, BricsCAD checks if the geometry bounded by the patch has changed. If it is unchanged, then the patch is preserved; if changes occurred, then BricsCAD outlines the patch boundary in red.

The new bimRoom command offers you two ways to specify rooms. One is to click a point in the drawing, from which BricsCAD finds the area enclosed by walls and then places a room marker; the dynamic UCS defines the bottom plane of the room. The room marker is a block consisting of a hatch pattern and data attributes that specify the name, number and area. In the second method, you select a 3D solid, which defines the room in 3D with area and height.

The new Structure panel allows you to examine BIM models organized by spatial containment: it lists building elements by Building, Story, BIM type, and then by composition. You can easily modify the organization as any property, including IFC properties, can be used as to group and sort the elements.

The types of section views are expanded to generate full, half, offset, and aligned sections. When placing a section view, you can specify the depth of the section to limit how much detail is shown, as well as use leaders and rectangular frames to label and highlight detail views. When you dimension generated drawings, they are updated automatically after you change the source 3D model.

The bimSection command has a new option named Detail that creates volume sections. To define the volume box, it prompts you for three corner points and uses the dynamic UCS as the base of the box; the base plane is also the section plane. When you hover the cursor over a bimSection element, you select bimSection from the Quad to create a detail section box that’s based in the same plane as the hovered bimSection.

Posted at 07:24 AM in Computer-aided Design: NEWS, Travelogues | Permalink