OK, we are back at the Graebert Annual meeting in Berlin, but we've moved from the funky 25 Hours hotel to Graebert Gmbh's head office elsewhere in Berlin.

"Many alternatives are fighting for a portion of the low-cost alternative-to-AutoCAD market. If you are aiming at price, then you are looking at only a portion of the market. AutoCAD LT, for example, is only US$360 per year. The problem is that when you tell a potential customer that it is just like AutoCAD but cheaper, then the customer spends his time looking to see what he is getting for less -- what is missing.

"Innovation is key to being a leader, because followers are one or two years behind. Resellers tell us that we need to have all the features others have, but this means we would be behind, because we have to wait to see what the others are doing. So, we take a head start on new technologies even before larger competitors. Another benefit is that Graebert doesn't have the financial needs of a big company, like Autodesk. It even has different style of marketing.

"But Graebert needs to tell its story that customers might otherwise miss." 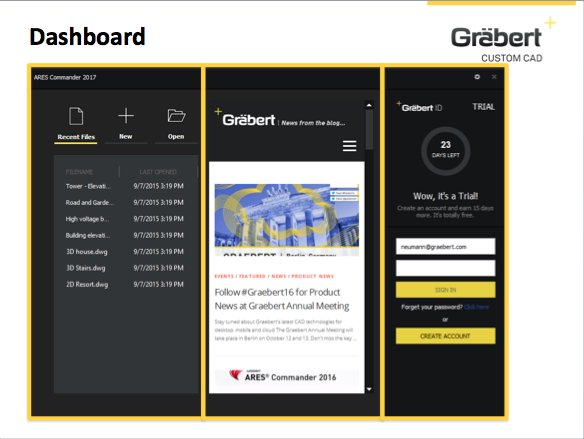 This is why Graebert emphasizes the trinity approach with the similar software running on desktop/laptops (Linux, MacOS, and Windows), on smartphones/tablets (Android and iOS), and in Web browsers (HTML5 browsers). Plus, they have one license for running the software on all platforms, with portable licenses that allow use on various desktop/laptop computers. The license is checked once every 30 days. A new customer portal lets users adjust license needs.

Finally, Mr Desbordes told us, his company does not attempt to produce a clone of AutoCAD, but rather a CAD package that includes productive tools . Some of its unique functions are these:

The company has several people working on marketing through videos, social media, Web sites, and is launching a new blog.