« foto of the sunday: Texting on the Streets of Europe | Main | A new file formats for CAD users »

'Airplane Mode' is useful for more than just on airplanes

Phones, tablets, and even Windows 10 desktop computers have Airplane Mode. Turn it on, and it turns off  all of the radios used by the device. This goes back to the day when we were assured that a single cell phone transmission would crash entire airplanes. (Turns out it was an urban myth, not science,  like the myth that cell phones cause gasoline pumps to explode into flames.)

So, airplane mode turns off all the radios, such as WiFi, Bluetooth, and cell communications (talk, text, and data). Here is where this mode can be useful on land.

One of my Android tablets accepts SIM cards. I don't have a SIM card in it. The tablet repeatedly warns me in the notification panel that the SIM card is missing. This gets irritating seeing the message pop up regularly. So I do this:

With the cell radio turned off, the tablet no longer wonders why the SIM card is missing. And yes, you can can both turned on: Airplane Mode and WiFi. (Not sure if this tip works on iPhones.) 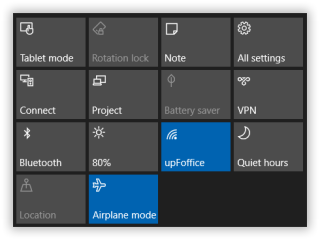 Bonus tip: Use Airplane Mode on any device when it is on batteries. It instantly turns off unneeded radios, saving some power. I do this on my Windows laptop, where it turns off Bluetooth and any other built-in radio that I might not know about. Then I tap the WiFi button to regain Internet access. See figure above.

Another use for airplane mode: turning it on while playing games on my iPod turns off all those annoying pop-up ads for other games.