My new keyboard (even though I didn't want it)

I came back from vacation to find the S and K keys no longer working on my Logitech Illuminated Keyboard (yip, that's the model number). As a professional writer and touch typist, I need a good keyboard under my fingers. The definition of "good" is a keyboard that lets me type fast and accurately. I type over 120 words per minute -- almost as fast as people talk (160 words per minute, typical). Poorly-designed keyboards (like those super shallow ones on Surface-style tablets and thin laptops) make me miss keys and slow me down.

So Monday morning there was a rather urgent hunt for a replacement. I used a spare keyboard until I had time to get to the nearest store selling computer accessories. The spare, a Logitech K800, has mushy keys, slowing me down. It is a spare that I use with my spare computer. It is wireless, which means it takes up TWO USB ports: one for the transmitter dongle, and a second for the recharging cable. That was a bad purchasing decision!

I looked around on the Internet for keyboards, and saw that Logitech's G-series were recommended for having mechanical switches. ('G' is short for "gaming.") I hadn't used a mechanical keyboard in, oh, 15 years at least, when I gave my mechanical keyboard to my wife for her computer. It still works, clanking away as she types. In the meantime, I went through a half-dozen keyboards. Most wear out from me typing all day; some reach EOL (end of life) when I spill my ever-present tea on them, accidentally.

So I arrived at London Drugs (a regional pharmacy chain that also happens to sell prescriptions), and the helpful computer department salesman showed me his line of high-end keyboards in the back of the store. (The $20 ones are at the front on the other side of the anti-shoplifting gates.)

He picked out for me the Logitech G610, since it was over $100 (as I had requested) and had backlit keys that displayed only the color white, not waves of multi-color LEDs that gamers apparently need. This picture from Digital Trends does a good job of showing how tall the keys are, as well as the white backlighting: 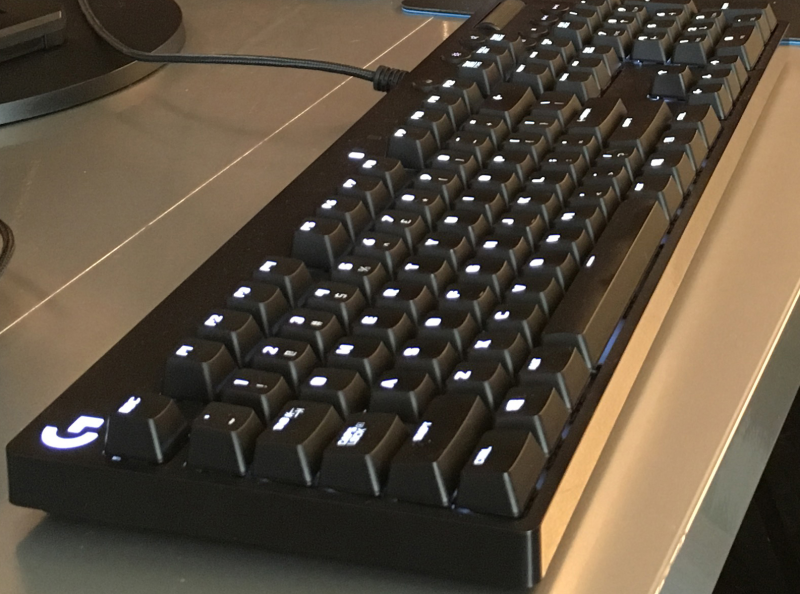 After using it now for 24 hours, I find the keyboard lets me type fast and accurately, so that's good. It has media keys (volume, play, etc), variable brightness of the backlit keys, and a roller bar for changing the volume.

Instead, the G-series comes with its own utility software, garishly designed to apparently satisfy the visual needs of gamers. After poking around a bit, I found I could get it to disable the CapsLock key. The software also allows me to control each LED individually, so I turned them off for certain keys, like CapsLock and the never-used Windows menu key. It comes with presets that cause the LEDs to turn on and off in patterns, such as a wave crossing the keyboard. That feature I quickly nixed.

As my fingers get used to the new keyboard, I am liking it for its speed and accuracy. I just hope that the fingers eventually get some stamina from pressing mechanical keys!

There are many flavors of mechanical keyboards - some are stiffer, some are lighter.

I'm a big fan of Cooler Master's Storm QuickFire Tk series, which I have in 3 flavors (Blue, Brown, and Green, which refer to color of the Cherry MX key stems) which I bought for about $65 each. I also have a Unicomp buckling spring keyboard, but for me the smaller ten-keyless keyboards reduces RSI.

There are other mechanical keys,too, such as the Topre capacitive keys (used in the Novatouch TKL and others), Alps, Romer, and more. The Logitech G-series is available in Red, Blue, Brown, and Romer-G

I can't stand Cherry Reds, which have a linear response (no break over), although apparently a lot of gamers love them.

Supposedly the Topres have a fairly soft touch and a long life, but I doubt you'll spend >$150 just to try them. Of my 4, the Cherry Browns have the lightest touch and are the most quiet, but still have some nice tactile feel.

The Blues are my favorite - still a fairly light touch, but more tactile feedback (and more noise).

The Greens definitely take more force to use; I kind of like them, but for more force, I prefer the buckling springs (which are quite noisy).

My guess is that your G-Series has Cherry MX blues, since they are the most popular.

Thank you for the overview of mechanical key systems. I went foolishly into the store, thinking they were all the same, and was puzzled by one Logitech keyboard was called Red, another Brown, when clearly they all were black!

I have a Logitech Illuminated Keyboard as well (model K740) that I use for writing and editing. I really love it; it's slim and quiet (good for taking notes during phone interviews and conference calls) and supports my fast typing. Unfortunately, I'm on my second one and am ready for a third because the scissor-style keys are not durable, and once they pop off are nearly impossible to replace.

FYI, I wrote an article early this year for CAD users who want to understand the basics of choosing a keyboard: http://www.cadalyst.com/hardware/input-devices/choose-best-keyboard-cad-27200.

I find I type even faster with this mechanical keyboard during telephone interviews now, but you are right: the clacking is annoying when on the phone!

IF the store has a return policy, and your keyboard does not have Cherry Browns, you might want to look into exchanging it for one with Cherry Browns (after trying them out, of course).

I have my Brown and Blue keyboards close to each other, and the Brown keys are substantially quieter. The touch is a bit different (I'd say close to a scissor-style); compared to the Blues, I'd say it's a softer with less noticeable break-over.

My old Thinkpads (T40, X61t) had the excellent IBM/Lenovo scissor-style keyboards and are still going strong, although they get a lot less use than they would from a CAD editor :) I liked them so much that I got desktop keyboard version, but it wasn't the same - I think partly the keyboard was too light, while on the laptop the keyboard has a bit of weight under it.

I'll try the brown one, after I get my head out from under the water

Small note: I meant to say the Browns are CLOSER to scissor-style (not "close to"); it's still a different feel, but they're closer than any other mechanical keys I've tried (Blue, Red, Green Cherries + buckling springs).

I've previously looked at gaming keyboards to make use of their macro keys for CAD. http://www.cadconcepts.co.nz/macros-in-cad-is-games-play/
This actually works very well, but on these particular style of boards I found the key spacing too compressed for typing.

The Logitech site shows G610 available with Brown or Red, and I am pretty sure I saw Red on the box before I threw it out (into recycling, of course).

At those at the outer reaches of the Antipodes the choice is somewhat reduced
http://gaming.logitech.com/en-nz/gaming-keyboards

I first used a Microsoft split ergo keyboard after the OEM mechanical one I had used for years died late on a Sunday afternoon. I was working and the choice in one of the few shops open were cheap and nasty or the Microsoft split.
I like using it but have been locked into the style for desktop computing, find a conventional keyboard 'wrong'. What is odd is that doesn't seem to apply to laptops, can only put it down to the different key pitch.

The difference between Red and Brown should be pretty easy to tell - Reds are linear (have no "click"), but if you slowly press a Brown you can feel a little bump part way down (the tactile break-over; it's much more pronounced - and loud - in the Blues and buckling springs).

I've heard that Gamers like the Red's linear response; I've only tried a key I bought from Digikey; based on that, I don't like the feel at all.

I've thought about the supposedly ergonomic keyboards, but the problem is that they're not standardized, so it's hard to switch keyboards, they're often way too pricey, and they're not available in ten-key-less versions, which improves my ergonomics.

There is something in the brain that adapts itself to whichever keyboard we use long-term. In my Typing 9 class (1971), touch typing was called "the fingers memorizing the locations of the keys."