Next week in upFront.eZine: IronCAD 2016

The Mother of Modern CAD

IronCAD had a huge impact on the CAD industry, twice. The first time was in 1994, when it launched under the rather unwieldy name of TriSpectives Professional. It astounded us how much interactivity could be possible in CAD software. (Click image at left to read the full-size version of the box.)

The second time was every year since then, as competitor CAD packages adopted the technology pioneered by 3D/eye. Technology like interactive 3D cursors, dragging and dropping parts from a palette into the drawing, and objects intelligently linking with each other. If your CAD package recently added any of these, thank the smart folks at 3D/eye who figured all this out more than two decades ago.

So why isn't everyone using IronCAD these days? 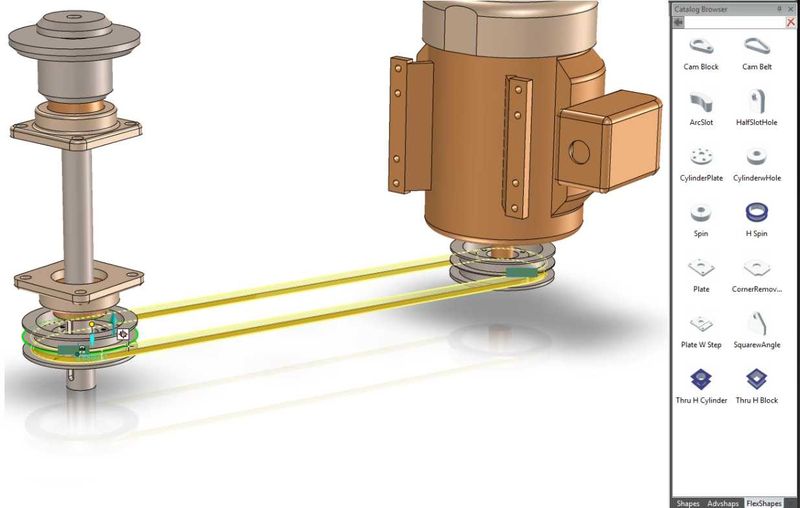 The technology was too soon. Using TriSpectives was such a paradigm shift to users who were still mainly running keyboard-oriented software on DOS or Unix systems. (Windows 95 had just launched, and NT was still targetted at corporations.) It would have been better, I think, had 3D/eye transitioned the technology over time.

It was overhyped. 3D/eye's marketing used a quote from an analyst that was obviously untrue: "The Pro/E Killer!" Really? A brand-new (and hence still immature) CAD package replacing the established Pro/E is inconceivable. Except in this case, using the Wallace Shawn word was unironic, for TriSpectives didn't even include a Pro/E file translator. You're not going to replace a CAD package at a customer site if you're not interested in reading the customer's existing design files.

(If you want to blame -- or credit -- anyone for killing Pro/E, that would be SpaceClaim. Creo was PTC's "get out of jail" reaction.)

3D/eye couldn't sell enough software to survive, and at the end was split in two. Autodesk bought some of the technology, first installing it in Actrix ("The Visio Killer!"), which it killed off after the second release. The smart technology then found its way into AutoCAD's dynamic blocks function.

The other half became IronCAD, today owned by CAXA.

We interview Cary O'Conner of IronCAD LLC next week in upFront.eZine #889 about the newest intelligent behaviours added to IronCAD 2016. Subscribe here, and then tell all your friends.

Posted at 01:12 AM in Behind the Story | Permalink

Thank you for your continued coverage of IronCAD and it's history. I was an early user of Trispectives and found it far better than anything else available at the time. It ran well on my Windows 95 PC and gave me the ability to do 3D solid modeling, renderings and animations at a very reasonable price.
All of this is common place now but in 1995 this was pretty amazing stuff from a Windows PC and $500 software! While others were paying 10K+ for Pro-E and another 10K+ for a Unix workstation I was making a nice living off Trispectives with 3D solid modeling, animations and renderings on a very affordable Windows PC.
Here are some examples of work I did with the software in 1995-1996: 3D form studies, color studies, 3D printed models from .stl files, renderings and 2D documentation. Again, all of this is common now but it was well ahead of the pack in 1995 and at a price that could not be beat!
http://www.idesign2.com/corel/corelimages/hex1.jpg
http://www.idesign2.com/idesign2.htm

I first encountered Tri-Spectives in its infancy, at (I believe) NDES in Chicago. I was working for a PTC/Computervision/Autodesk reseller at the time, and was given a copy. I believe I was somehow placed on their reseller list, as I continued to receive quite a bit of correspondence, information, and updates from the company.

I honestly thought I was seeing the future.

Sure, there were issues with interoperability, and I encountered some with internal accuracy (I was told it was just an ideation tool, not really valid for documentation or downstream applications, i.e., CAM) but just the same it was a revelation. Certainly this will revolutionize the industry!

Ironic, then, that even some time into its IronCAD reincarnation, they were touting in ads that "100s of customers can't be wrong." 100s?

So, yes, Ralph, thanks for following up on this very interesting product, and for the reminder that the CAD industry never plateaus and gets boring.