Alight, here we are in what is normally beautiful downtown Vancouver, but the low cloud and light rain is hiding the snow-covered mountains and making the harbour front generally gloomy. No matter, we are warm and dry inside the Pinnacle Hotel's three ballrooms, a hotel that's old and therefore has character missing from shiny new ones. Here's the view from the conference area after lunch...

The theme of this conference is Beyond BIM, looking beyond just design. So we have topics like Augmented Reality, Mobile, and Computational Design.

The first suspension bridge was designed in 1570 in Italy, but the first one was not built until 1820 in USA. Problem was the first ones spent their time collapsing, and so the design was abandoned for a 100 years. "Things that don't first go smoothly out of the gates will eventually catch on, if they are a good idea," says the keynote speaker, Jeff McLellan of BFL Insurance.

Being from an insurance company, Mr McLellan is describing how slowly the insurance industry is slowly becoming aware of the role of BIM, some 15 years after the software launched. Even the use of CAD was seen as a extra, not integral to engineering firms. So leaping forward, he is pretty sure that AR (augmented reality) will make a big shift in BIM as the project can be viewed on-site before it is built: "Maybe it would look better if the stair is moved over 25 feet."

What will not change is that designs are still done by design professionals, and things constructed by contractors. The biggest benefit from BIM, he says, is clash detection and how much it money it saves. Another big advantage is pre-fabrication so that buildings go up faster. In England, he has seen bathroom modules that drop into place, ceiling racks for hospitals, and in Norway apartment modules.

One of his concerns is the long-term availability of models; models have to be around for 15 years (I think he said), but the question is when that 15 years starts.

BIM and Prefabrication of Timber Structures

Lucs Epp of Structure Craft now is telling is that BIM is about comminication. He likes the idea of using sketching to think about designs, but today we tend to go directly to 3D modeling. (See figure below.) 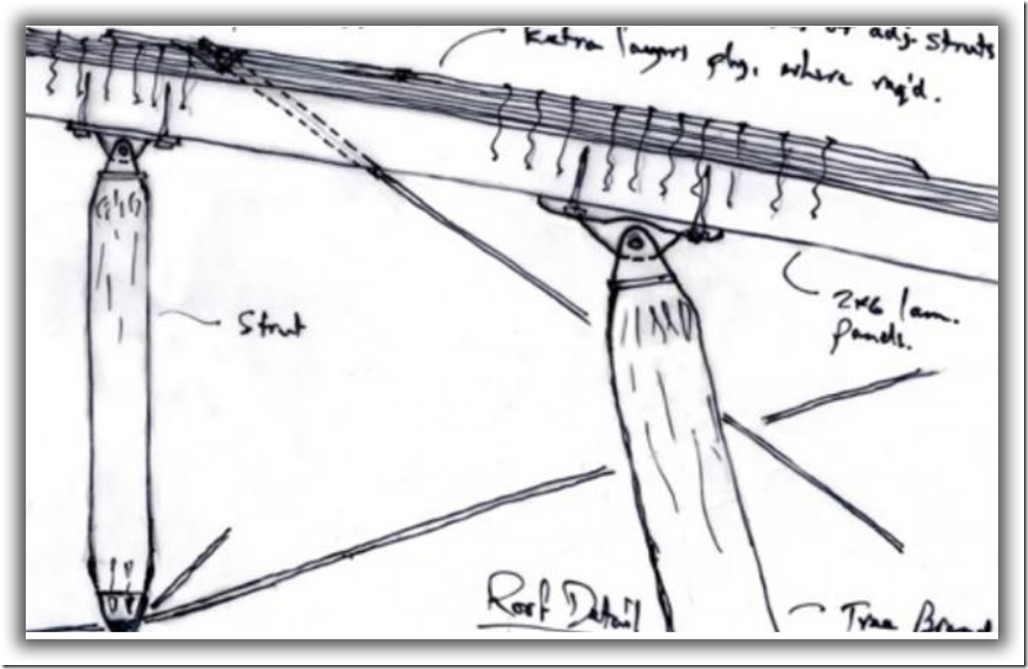 The first 3D model he worked on was ten years ago the Richmond Olympic Oval (see figure below) using Inventor. More recently he worked with Grasshoper to create a exhibition building in Cairo that could not be designed with Revit.

Creating undulating or warped shapes is easier and cheaper with wood than using steel, because wood can be stacked effectively in an offset manner.

He is showing us how his firm used Grasshoper inside Rhino to simulate the construction of a building, even down to how much material each truck load can handle. The installation of each wood panel is sequenced. Important, he says, when Minneapolis union labour rates are US$80 an hour. Most of it was installed in one week. "The power of prefabrication is immense," he concludes.

We're back froom the break, and Vaughn Harris is telling us about the Internet in Africa. As you might expect, there isn't much. The highest number is 48% for South Africa, compared to closer to 90% for Europe and North America -- percent of the population using the Internet. For mobile use, the numbers are reversed. All of Africa averages 148 cell phones per 100 population, but only 48 in Canada. (Well, Canada was late coming to cell phones, given the sparse, thin band of population along the northern US border.)

OK, now he's jumped to to the topic of Information vs BIM -- I'm not sure what he is relating this to Aftica. OK, with a bit of a detour, I see where he is goingL he says they are using Twitter hashtags to connect data in projects.

And now we are into the future prospects for BIM. Ailyn Mendoza of IrisVR is using her laser pointer to show the most important part: a wineglass. They've been working on Prospect for two years, using standard VR equipment like Oculus Rift and HTC Vivie, reading files from 3D systems like Revit, SketchUp, and Rhino.

The software converts 3D models to the VR device. You use an XBox controller or keyboard to control the view. Layers can be toggled, height can be adjusted to your own height. They are working on annoations, take snapshots, a dollhouses view, and so on.

It's panel time! We have five panelists talking about how they use technology, how they are managing BIM.

The speaker from Lecor says that the word for him is "blur" -- the bluring between design and construction. The speaker from Kasian says the biggest problem is acting like we are working together, but people don't actually want to share drawings. The architect from Dialog says the biggest worry about sharing is liability, but BIM increasing acuracy, there is less liability to worry about. He thinks that if we share more, we are more willing to forgive inconsistancies in models. 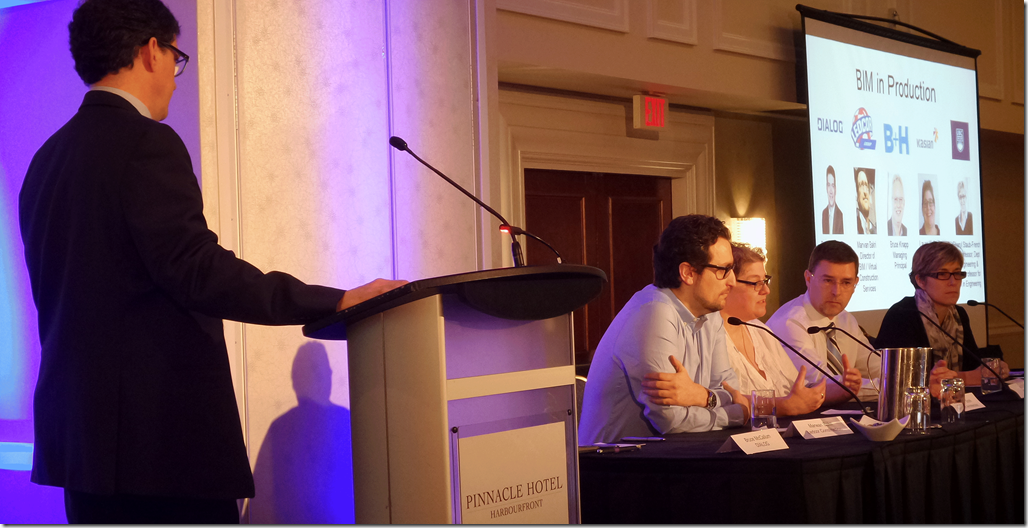 Not everyone benefits, and so people have to be incentivized to share models, says the panelist from the University of British Columbia. "We have to think about BIM in procurement mode," she says. "And we need more resources -- like standards -- tailored for Canada." We are in a transition period, a transition period that seems to be taking a very, very long, she concludes. Canadians are far behind the USA, where government departments and states are already mandating BIM. In Europe, many software packages are being used, and so IFC will be the platform, not BIM; it's not the software, it's the process.

We're back from lunch. One thing I gotta say about CanBIM is that they really fed us. I am stuffed. I had lunch with CanBIM president Allan Partridge, where we spoke for over an hour about the role of CanBIM and his vision for the future of BIM. This interview will appear in next Monday's upFront.eZine newsleter. Subscribe by sending me a email at grabowski@telus.net

The Tao of BIM is CAM

We are all familiar with the frustratrion BIM proponents have over getting BIM throughout the construction process, with silos keepsing 3D models and data migrating from building designer to construction contractor to facility operator. Of all the BIM conferences I've been to, the theme is always the same: BIM is wonderful, but why isn't it pervasive yet. At today's confernce, too.

But at today's conference, I detect a role for BIM that goes beyond the architect's office: CAM. Who'd have thought that the enclave of MCAD is the vehicle for spreading BIM. We are seeing lots of presentation today that talk about using BIM for generating the data for fabrication, whether wood, steel, or piping. CanBIM's president also emphasized to me the importance of data over drawings.

Carl Storms from Imaginit Technology is asking the question, "Why don't we [use a mobile workflow]?" Audience replies, "Too slow." "Fear of technology." "Too expensive." Mr Storms counters that the cost is coming down, although he admits that the time is missing to implement. One of the problems of not changing is that you get left behind.

Getting towards the end of the day, we are back to panel mode. This time the topics is what is the future of BIM.

The panelist from HDR is looking at graphics technology outside of CAD and BIM that can handle huge models, such as in gaming -- as well as the use of sensors. Clark Builders wants to see the model go into the field, to be directly used by contractors. StructureCraft feels that construction is really lagging when it comes to software; his firm is increasingly linking parametric models to the Web.

Posted at 09:09 AM in Travelogues | Permalink

In Europe we see BIM as a process rather than software. This view has prevailed over the years.
In Germany about 40 CAD products are sold that have an IFC interface. Germany respectively the German government is committed to Open BIM.
The EUBIM Task Group is to summarize the national guidelines in a single European directive in Europe.
For most topics, I have a personal opinion, which I share on my blog ulfkrause.wordpress.com.
Best regards
Ulf-Günter Krause