« The 2016 edition of "BricsCAD for AutoCAD Users" now shipping | Main | foto of the sunday: Vancouver Harbourfront »

CAD software is nothing more than a geometry calculator that does vector math, the stuff we learned during our first year of science or engineering degrees. Those matrix transformations that took us minutes or hours to work through manually are these days calculated instantly by CAD. Fast forward to 2016, and I'm working on several online AutoCAD courses for a technical college in the Eastern USA. I found that one of the student homework problems could not be solved by AutoCAD, at least not easily.

The problem involved a series of relative distances and relative angles, the kind of sketch surveyors produce every day, a profession that here in Canada began in 1626. The figure below shows a typical example, where the relative angles are A1, A2, A3, and so on. They are relative, because they are measured relative to the last segment, and not to an absolute reference, such as North or the x axis. (Image from globalsecurity.org.)

AutoCAD can input relative distances, such as D1 and D2, which are measured from the end of the previous segment. (Use the @-prefix for distances and coordinates.) It cannot, however, input relative angles, even after 33 years of software updates and marketing hype. There is no @-prefix for angle input.

There is a workaround, of course, but I am not sure why one should be needed. The solution is to reset the UCS (user-defined coordinate system) each time we start the next line segment. Enter UCS Object, and then pick the previous segment. AutoCAD automatically aligns the UCS to match the orientation of the segment. Then we can enter the relative distance to the the next segment's endpoint, as well as the "relative" angle.

This multi-step process could be automated through AutoLISP. As it turns out, however, the process is much easier with manual drafting, where the protractor reports relative angles naturally. See figure below. 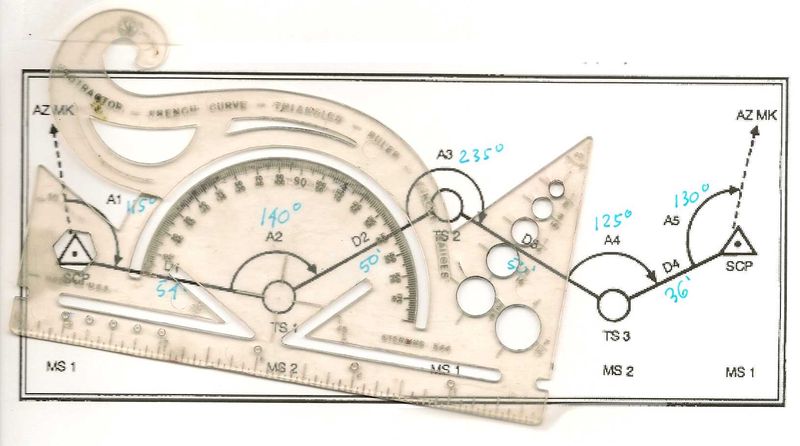 Posted at 01:50 AM in Computer-aided Design: TIPS, Impractical | Permalink

Ralph, Why not go old school. Draw the first line and add points to each end, Scribe a circle where r = D2, rotate the first line through the relative angle, extend/trim to the circle, Add a new point to the end of the line and repeat. You will have to join the points when your done

In MicroStation the AccuDraw tool handles it.

But I agree, a quicker way to draw a line at a relative angle to the previous line would be handy. And not everyone enjoys working with Dimensional Constraints...

Can Bricscad do it?

Microstation AccuDraw is the best drawing aid I've ever seen.

The answer is to use AutoCAD Civil 3D and use the transparent commands 'AD (Angle Distance). After all this is a surveying and civil engineering problem so why not use the applicable solution provided by Autodesk?

Copy-rotate (as another Steve said earlier). I've done this for 20 years.

Set the polar tracking to 'relative to last' ?

Use GRIPS with Rotate Copy option.

Next you'll be asking why they have never created a dimension style suitable for surveyors (bearing distance etc..)