« What It's Like Running Solid Edge on a Cheap Windows Tablet | Main | Live Blog: Onshape's 2 Announcements »

Who Could Buy Onshape?

Onshape runs on funds from investors, who have put $144 million into the private company. While its' pretty exciting to play with that much money, there is the dark side. The investors want their money back -- with growth, and not too far in the future. Assuming a 25% premium, the company's price tag is $180 million. At least.

Who could pony up that much cash? Well, the appropriate suitor needs to meet two qualifications:

Other items that usually are valuable in acquisitions are lists of customers, dealers, and country distributors. In the case we are considering, however, these have little value as Onshape is too new to have built up a spectacular number of customers, has no dealer network, and lacks local presences internationally. Being rented by the month is a disadvantage customer-wise, as all customers are free to defect monthly.

Let's look at what the dowry that potential suitors must present to the investor parents: 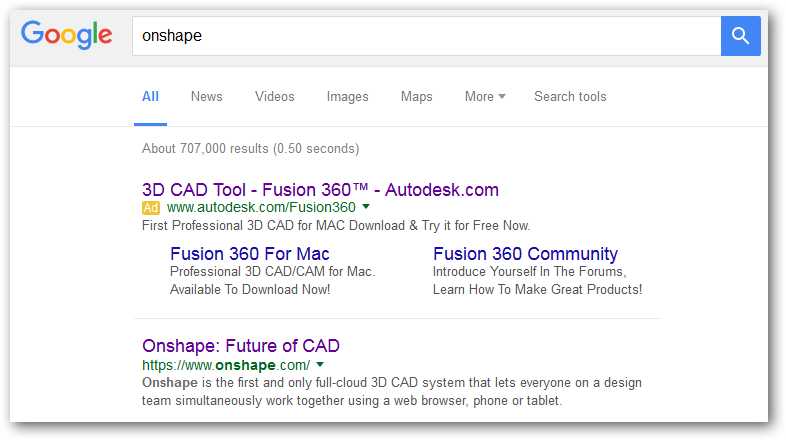 Autodesk running Fusion 360 for Macintosh ads against the 'onshape' keyword

Going beyond the initial, narrow criteria of wealthy, needy, pure-CAD companies, let's look at who  else might come a-courting:

Well Written article, these kinds of article were history in the past, but we see such ideas and forecast for the future in a well written manner that also throws newer ideas to big CAD players.

If we look at ALL the PLM, other suitors for the 'Bride' could be Oracle, SAP, Infor as well. The intent of OnShape Produces has always been, Innovate, Develop, Sell and Sell-Off. The Caveat is the Industry (a.k.a Users) are not looking at Cloud based solutions, yet, on account of IPR sensitivity and not-so-reliable net connectivity to handle large scale users/ data. OneShape is still a work-in-progress and getting developed at the expense of its initial supporters (I would not use the word users, yet). Let us see if OneShape gets itself On To Shape for the Future of CAD. Otherwise, it will another blip on the CAD Screen.