Alright, here we are awaiting Onshape’s press conference. The Web-based CAD vendor this morning gathered the press for a Web-based press conference, appropriately enough. We’re just waiting for the 8:30am even to begin…

…and as we wait, here is a summary of speculation, as collected by Al Dean:

Oleg Shilovitsky ‏adds, “I think one option missed in your blog - what if Onshape will just build a product and business? Or IPO is another option. Both PTC and Autodesk did it in the past.”

Randall Newton is going with a and b, closing beta and opening an app store. No one will buy Onshape until the $144 million is spent, he feels.

Another editor writes, “They have had so much investment money the valuation would have to be off the charts. DS refuse to buy off of Hirschtick as they see it as a major slap in the face. An acquisition would be a major defensive move. And would only make sense for someone with a load of tech to pour into it. Siemens doesn't do SMBs [small and medium size businesses] very well. PTC would probably develop it themselves and use their own kernel. Would be gobsmacked if they sold it. Hirschtick said the company was set up so it would be hard for him to sell. I can't see that as being an option.“

Now that I think about it, Randall Newton is right: the Onshape app store was announced (prematurely, perhaps) at the Graebert event in Berlin, last October. So, that will be one of the items announced this morning.

Onshape has to come out of beta at some point. Calling all the media to a press conference would be the appropriate time to do this.

Before the news comes out, all speculation is equally valid! 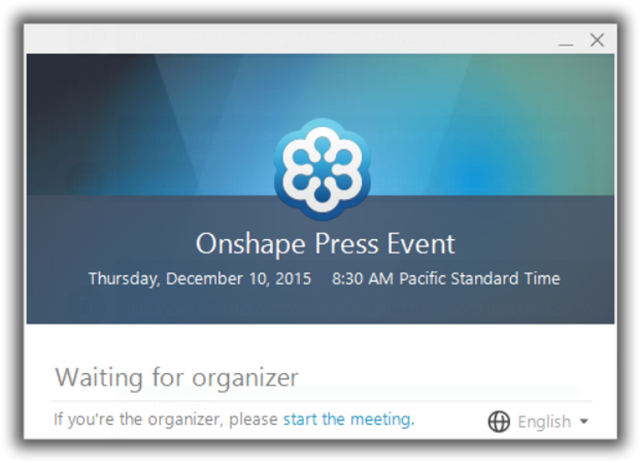 [I’m writing this with a new blog editor, Open Live Writer, so excuse misspellings as the spell checker is not yet implemented on this beta software.] 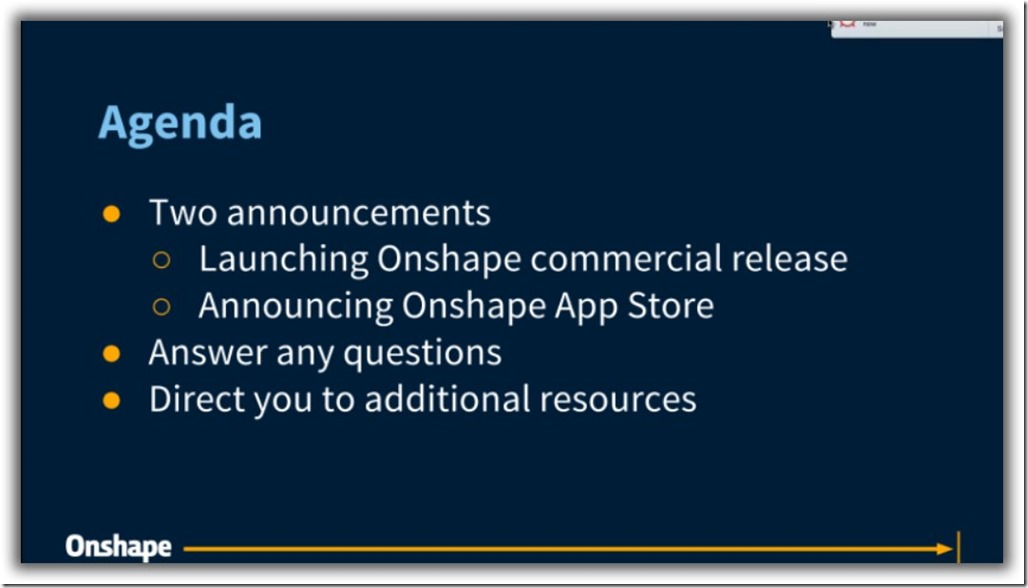 Onshape is announcing 10,000 beta users of its software, with 390,000 CAD files imported and exported. 1 in 6 sessions are on the mobile version, Android and iOS, with 54% of paying users on mobile. “Saving parts while on the plane.” That’s the thing about server-based CAD: the vendor tracks exactly what is being done by you.

Uptime has been 99.9% and nearly zero crashes, so some downtime and some crashes resulting in work loss. “We are the only CAD system working over a network of cloud servers” – a dig at Autodesk’s repeated claim that Fusion 360 is, which it is not.

Joe Dunne gets the title “Partner Manger” for the Onshape App Store at appstore.onshape.com. Initially, 24 partners in the app store, launching next week.: 5 simulation vendors, CAM, rendering, and content like nuts and bolts. App are integrated into Onshape on the server, or else connected via the server, or else connected through the desktop application with Onshape. Also on app store: parts that you have designed in Onshape. Free and not-free offerings; no download or install, so use instantly after ordering; apps that you buy work on all devices. The app store runs in a Web browser, as well as inside Onshape.

One isue is how billing is handled. Available are subscription, pay per use, CPU hours, and free trials of all software. As Onshape leaves beta, the app store goes into beta, and so access is limited initially.

Being server-based means that all Onshape users will see the software in their Web browser switch from beta to commercial release without doing anything. [Heh, we are being told 30 minutes into the Webcast that we media were supposed to have kept this news confidential until next Monday.]

Q: What is the difference between the three kinds of apps?

A: Integrated app – is free, runs inside Onshape, like Graebert’s drafting component; runs in a separate tab.

Connected app – runs on a server, and connects to Onshape

Connected desktop – program installed on desktop and communicates with Onshape through Open Authentification, with data shutteling back and forth.

All data is stored in the Onshape database, and includes things like versioning and branching.

Q: What are forms of payment?

A: Uses the same mechanism as Onshape, no PayPal. [I guess this means that however you pay for Onshape, the apps are billed onto that.]

Q: What about free users of Onshape?

A: They have access to free apps. [Update: "Free users have access to all apps (free or otherwise). Use of apps is not tied to an Onshape Professional account."]

Q: What is the value to deelopers in being on the app store?

A:  It allows them to reach the market, easier to reach customers who use Onshape. It is in front of every Onshape user, a few clicks away, with an easy transaction. [From my experience with CAD app stores, this is no guarantee of success for third-party developers.]

Q: Is there ba preference between tablets and smartphones?

A: Twice as many use phone over a tablet, but tablet users tend to be twice as long. I wonder if giant tablets like iPad Pro will even lengthen the time? [There already are large tablets, like Surface.]

Q: What happens when I receive a document that has been made by an app purchased by someone else?

A: There will be a link to a free option, although some might be limited use. All apps have some kind of free option. [So, a compatibility problem; will they implement a proxy system, like Autodesk had to?]

Q: What is the certification process for third-party developers?

A: We are more stringent, like Apple. We want to make sure the app meets expectations, but developers are responsible in the end for the quality. We make sure it meets certain cases, but we cannot test them all.

Q: What incentive does a third-party developer have to provide a free version?

Q: Will mobile apps also come out of beta next week?

Just scanning your Q&A - quick correction - Free users have access to all apps (free or otherwise). Use of apps is not tied to an Onshape Professional account