Getting more disk space for free

With 3TB hard drives normal these days, computer makers are turning to SSD [solid state drives] to improve performance and increase prices. Problem is that they are still expensive. So 128GB and 256GB are the normal sizes in an age when we are used to 1TB drives in laptop computers.

There is, however, a free way to gain back some GBs. Back in the 1990s, a company called Stax figured out how to do real-time data compression on DOS computers. It could just about double the amount of drive space in those days. No surprise, the idea was so brilliant that Microsoft copied the software, added it to DOS, and then got fined big bucks for the IP [intellectual property] theft.

(Real-time compression did not occur before Stax came along, because computer CPUs were just too slow to do the work in real-time.)

This technology is still in Windows in 2015, even in Windows 10. It is called Disk Compression and is hidden away in the Properties dialog box of File Manager. In a moment, I'll show you how to activate it.

(Compression works by removing repetitive information. For example, if a text file has 50 space characters in a row, compression replaces them by a code that says "50 spaces." Video compression works a bit differently: it compares adjacent movie frames, and stores only what little changes from frame to frame. No repetition, no compression.)

This means that, yes, Disk Compression will free up some disk space, but it won't be the spectacular 2x from yesteryear. Here is a specific example. I implemented Disk Compression on my new laptop with the 256GB SSD:

So it gained me 5GB. Enough for half a season of CSI. The more files your hard drive has that are not already compressed, the more impressive the result

There is a drawback: folders that are compressed in Windows 10 get a pair of small blue arrows, whose look irritates me. See the figure below:

How to Implement Disk Compression

Right-click the drive icon, and then choose Properties:

In the Properties dialog box, click the Compress This Drive to Save Disk Space option. 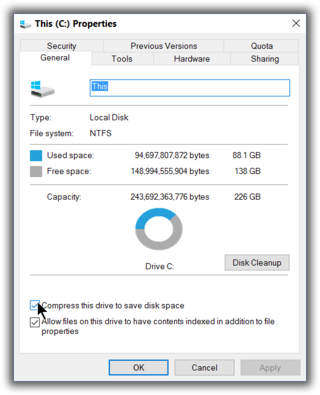 Click OK. Windows will get right to it, telling you approximately how long it will take, which I have found is vastly overblown.