« foto of the sunday: frozen leaves | Main | Russia to ban non-Russian software from government use »

Got AXD Files? We Got Actrix 2000 for translation!

Visio Killer arises from beyond the grave

Remember when Autodesk was going to shut down Visio by releasing its very own diagramming software, Actrix Technical? It felt threatened by Visio's release of IntelliCAD 98 at 1/10th the price of AutoCAD. While Visio went on to become a billion-dollar acquisition by Microsoft and IntelliCAD spawned dozens of software companies around the world, Actrix bit the dust after just two releases.

Every so often, someone contacts me, saying they have AXD files and needed to access the data locked inside of them. (See figure above.) Autodesk never provided a stand-alone translator for customers who inherited the drawings without the software. Actrix could output in DWG and DXF.

I had a copy of the original triumphant 1998 release, and the modest 2000 update, which was -- as best as I can recall -- eventually given away with copies of AutoCAD LT. The problem is that the original release came on 3.5" floppies, which my oldest computer could no longer read. Dang the transient nature of magnetic flux! 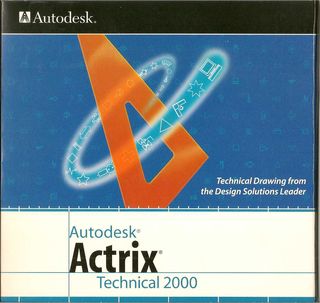 Last week, my 18-year-old granddaughter cheerfully pulled CDs out of the easily reachable shelving holding my massive collection of yesteryear software. I figure I have over 300 titles from the 1980s-today. One of the discs she pulled out was Actrix Technical 2000. (See figure.) It installed effortlessly on my Windows 7 computer.

So, if you need AXD files translated, contact me, and we'll see what's possible.

PS: The technology in Actrix lives on in AutoCAD's dynamic block function.

I have the same issue of not being able to open some archived .axd files

Is it possible to get a copy of this program?

I can convert files for you, but i cannot give you a copy of the software.

The AXD files are converted to DWG format.

Ralph, are you still able to convert AXD files? I have some I would love to be able to look at again.
Thank you, Jacob

Yea - I still have my setup files for Actrix 2000. Why they ever killed that I'll never figure out. Just an amazing piece of software

I've got an AXD file I'm looking to convert. Any chance you can you could convert it?

Yes, I can convert Actrix files to DWG. To do so, email me the files you wish converted.