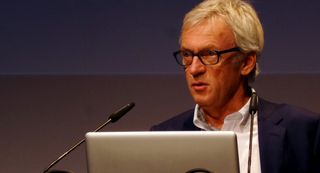 The conference facilities here are the best I've even sat it, which is a relief to us in the CAD media who have had to deal with no tables; tight seating; bad sight lines at some conferences of other CAD vendors.

With my rant out of the way, we are hearing the keynote from the ceo of Bricsys, Erik de Keyser. Both he and the ceo of Graebert Gmbh represent the most under-rated software systems in the CAD world. Well, maybe one day the rest of the CAD world will clue in.

Whereas Graebert is emphasizing OEM'ing on many kinds of platforms (desktop, mobile, Web), Bricsys is concentrating on many kinds of CAD activities based on the DWG format. So, for example, where Autodesk screwed itself by having a different file format for its AEC software, and a different file format for its MCAD software, so translation has been a nightmare for customers using more than one type of CAD design in their offices. By contrast, Bricsys was smarter than Autodesk, because their AEC software uses DWG, their MCAD software uses DWG. 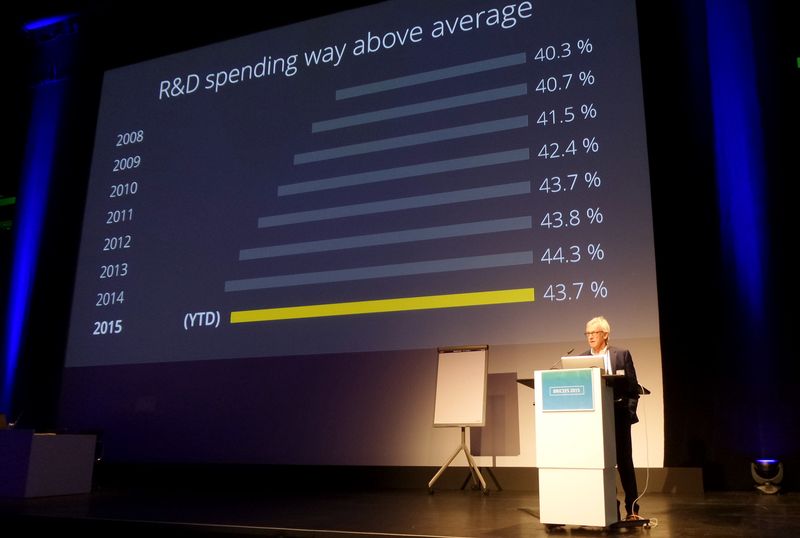 The most startling announcement so far this morning is how much Bricsys spends on R&D. Most firms spend 5% to 20%; Bricsys spends more than 40% of its revenues on research and development. (See figure above.) That explains the volume of enhancements that it adds to BricsCAD each year, along with mid-year updates. 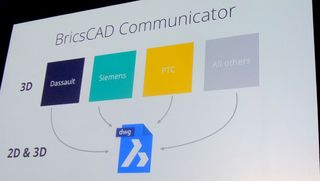 The company's ambition is collectively be better than the original. By collectively, Mr de Keyser means his company and its partners. By original, he means Autodesk and its AutoCAD.

He points out that the combination of DWG and his Communicator software (data exchange with most standard and MCAD programs) means BricsCAD can play with the big boys, like PTC and Catia. (See figure at left.)

Neil Peterson, president of ODA, seems to on the same road tour as me, earlier being in Prague and Berlin for other conferences. The Open Design Alliance is the technical organization developing full access to the DWG file format for its 1,250 members, and so keeps Autodesk honest. Here in Munich, he notes that Bricsys is the ODA's strongest members, providing the most amount of code to improve DWG access and peripheral software the ODA provides members. 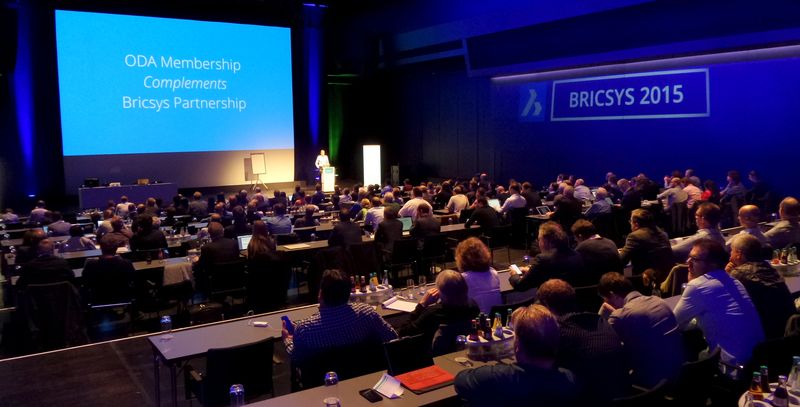 [Disclosure: Bricsys paid for part of my airfare, two nights hotel accommodation, and some meals.]

There are a lot more people at this year's conference than previous years. (See figure above.) I am guesstimating 350-400, consisting of third-party developers, users, Bricsys staff, and of course those of us in the CAD media.

One highlight of this annual event is learning what's going to be new in the next release of BricsCAD. I say "one highlight" because those of us who are beta testers already know all about it. Here is a list of new functions in V16:

EXPORTLAYOUT exports visible objects from the current layout to the model space of a new drawing.

DRAWING LOCK FILE SYSTEM creates temporary .dwl and .dwl2 files to inform other users who has the drawing open through the new WHOHAS command.

GDIPLUS is now the default graphics device on the Windows platform, replaceing the GDI device (which does not support transparency). Transparency supported for plotting, but is disabled by default for performance.

ASSOCIATIVE ARRAYS allows changes to propagate throughout the array by maintaining relationships between the items. Properties of each item can be individually overridden and the content of an item can be modified. ARRAYPATH distribute entities along a (portion of) a path (line, polyline, arc, circle, ellipse, spline, helix or 3D polyline). ARRAYPOLAR arrays in a circular pattern; ARRAYRECT arrays any number of rows, columns, and levels.  ARRAYASSOCIATIVITY toggles associativity for new arrays. ARRAYEDIT edits associative arrays and their source objects. ARRAYCLOSE saves or discards changes made by the ARRAYEDIT command. ARRAYEDITSTATE indicates whether or not the drawing is in the array editing state.

BIMINSERT now accept CTRL to switch dynamically between entering width and height of the door, and 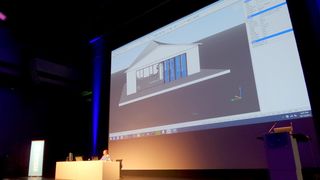 distance to neighbor-entities. Hovering on an existing door or window and choose BIMINSERT in the quad to place the same window or door, with the same parameter values. BIMREPOSITION repositions an existing door or window using the same dynamic dimensions as in BIMINSERT. BIMFLIP mirrors a window or door left/right or in/out with one click in the quad. Assign a different definition file to an inserted window or door using the 'File' property in the properties panel. Parameter values are copied to the new insert if applicable. BIMDRAG allows pressing CTRL to dynamically place a parallel copy. BIMSECTION: work in progress. Drawing generation for BIM projects is being reworked and will switch from using Drawing Views to using enhanced SectionPlane definitions.

DEFORMABLE MODELING does freeform modifications of 3D solids and surfaces and imported geometry by deforming their faces and edges. DMDEFORMPOINT transforms a point lying on the specified face. DMDEFORMMOVE moves or rotates edges. DMDEFORMCURVE moves a set of its edges to the specified set of target curves. See figure at left for before (imported model) and after (after V16 is done editing the imported modelling using deformation tools).

The figure below shows a Solidworks model imported into BricsCAD with assembly information intact.

SURFACEs are now fully supported in 3D modeling. Direct modeling commands and 3D constraints can now be applied to surface entities and regions. Applying direct modeling commands to procedural surfaces leads to converting them to a basic surface entity. DMEXTRUDE/DMREVOLVE extrudes and revolve curves, edges, planar entities and faces into 3D surfaces. DMDELETE removes holes (open loops) and faces from surfaces. DMSTITCH stitches a set of surfaces into a single entity of the specified type (3D solid or surface) or determines type automatically. DMTHICKEN converts a surface to a 3D solid with a specified thickness. 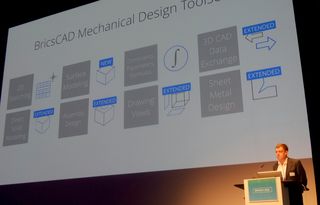 supported: Circular and V-type. Feature Coloring assigns specific colors to faces of Sheet Metal features; controlled with the FEATURECOLORS system variable. Lofted Bend is a new kind of sheet metal feature that can be unfolded into a sequence of bends with parameters to control the number of bends and their configuration (quadrangular or triangular). SMLOFT constructs a sheet metal body with Lofted Bend Features and Flanges. SMCONVERT recognizesLofted Bend Features. SMBENDSWITCH converts a Bend Feature to a Lofted Bend Feature. SMREPAIR joins connected lofted bends which are surrounded by flanges and rebuilds them to be tangent to adjacent flanges (if any). SMRETHICKEN supports lofted surfaces. SMRELIEFSWITCH changes Corner Relief Features between Rectangular, V-type and Circular. SMSELECTHARDEDGES selects all hard edges in all models. 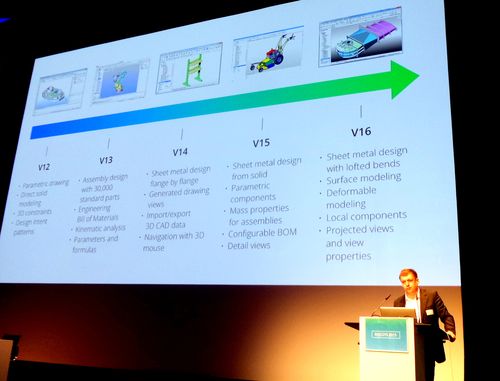 Posted at 07:37 AM in Travelogues | Permalink