« foto of the sunday: German rail worker | Main | Q&A with the CEO of Graebert Gmbh »

Alright, here we are in Cincinnati for the  annual Solid Edge University event. Usually, it's in June to coincide with the annual release of the namesake software, but this year it's in October, and maybe later we'll be able to find out why.

We're starting this morning with the keynote by John Miller, he the senior vice president of 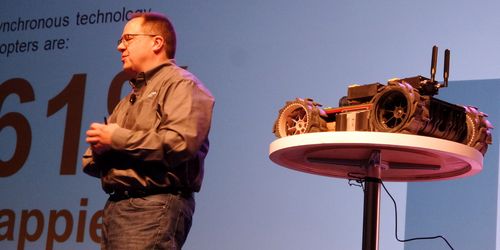 mainstream engineering software -- which is the way Siemens says that he is in charge of Solid Edge and FeMap. The theme this year is "Design without Boundaries." Better yet, this is the 20th anniversary of Solid Edge, which originated with Intergraph's Project Jupiter initiative, old timers will recall. This is why Solid Edge is headquartered in Alabama instead of Munich.

The key differentiator of Solid Edge with its similarly-priced competitors (Solidworks, Inventor, Creo, and so on) is Synchronous Technology, which is best described as super-charged constraints. But it is not easy for users to get into it, and so a theme of every Solid Edge University is encouragement to get into SE.

In the photos of John Miller (above and at right) you can see part of a giant statistic, "61% happier." According to a survey (I don't know the source, sorry), people who use SynchTech are 61% happier with Solid Edge than those who don't.

Many Solid Edge users simply employ the software like a Solidworks or Pro/E: a history-based parametric modeler. Switching to SynchTech is a bit of brain tease. And so Siemens PLM is always promoting the great differentiator. At breakfast, I met the designer of cattle feed lots. He is the opposite, he told me. He always works with SynchTech but now needs to learn "ordered" modeling, Siemens' name for non-SynchTech modeling.

Other tidbits from Mr Miller: Microsoft Surface is the sole Platinum sponsor of this event, and there are a number of demo stations where attendees can try out the latest Surface Pro 4 and Surface Book. It always has been Microsoft's desire to drive up the price of Windows-based computers, and so the most expensive SurfaceBook positively beams at $3,200; stylus included. I'll never be able to afford that.

There are now over 200 third-party developers with add-ons for Solid Edge, some of which are showing their products here. And then there  is the online Solid Edge App Marketplace where "We have a nice selection, with more to come." Not sure of the official tally of attendees, and so I am guestimating 400-500.

Fascinating talk by Phillip Norman of Ross Robotics, an artist who became an engineer using Solid 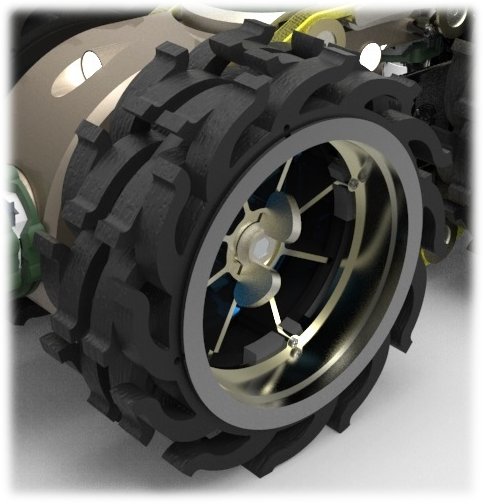 Edge to invent a universal connector. Think of Lego having only one brick that can handle any type of connection, including circular ones. Anyhow, this led to him forming a company that builds simplified non-metallic robots for dangerous locations like CERN's high magnetic fields.

One thing that potential customers wanted was a low slung robot (low slung so that it would not tip over) that could travel through unexpected terrains and yet not get caught up on its underbelly. Take a look a the wheel at left: those rubbery legs open up to grab edges; a secondary tread is operated by the wheels ensure that when the bottom drags, it becomes like a tank tread, and so cannot get hung up.

Speaking with Mr Norman during the break, he admitted he forgot to mention during his speech that he uses SynchTech extensively. "Once you figure it out, you'd be crazy to go back. It does so many things for me automatically, so fast." He also mentioned that his robots have a lot of artificial intelligence to self-configure, to understand their environment.

The first time he tried out his tank tread idea, it was sending the robot over some local train tracks. He was video taping the robot's movement, but the resulting movie jumped  around so much, because he was giggling with joy that his idea worked!

Siemens isn't just all gray and blue engineering software. It's also trying new software, like Catchbook -- simplified parametric software that converts hand sketches on tablets into straight lines and proper curves. It's not yet released, "coming in Fall 2015."

Ken Hosch is director of innovation, research, and strategy, and he is on stage to show off this tablet-based 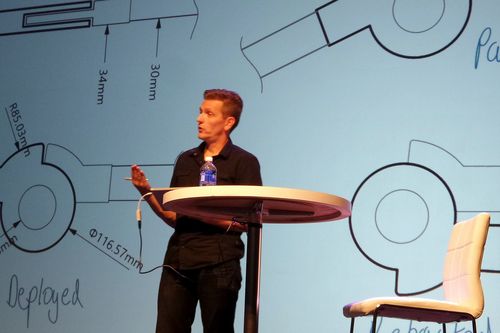 Basic entities are lines, circles, arcs, ellipses, and splines. To select, draw around the entities, and then choose an action. Scribble action erases, making breaks in curves, removing entire curves, or the entire drawing. When the software notices a thing is drawn a second time very similarly, Catchbook makes it the same size as the first, and aligns it. 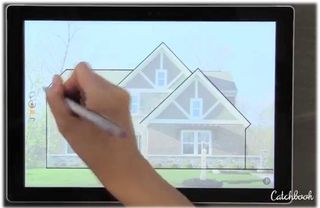 Being parametric, entities are moved intelligently and are snapped to geometric features. Most commands are not executed consciously: nearly every action is done with the stylus or by touch.

Commands appear in a toolbar-like control near the pen. Multiple drawings are stored in binders to create collections.

About to go into public beta. Runs on Android, iOS, and oh, also Windows (heh) https://www.plm.automation.siemens.com/en_us/products/catchbook/

During the break, I  learned why Solid Edge University is in October, instead of June with the software release. Siemens felt that its customers should have experience with the new release before coming to the University to take a deeper look at the new functions.

Applications engineer Craig Ruchuti is demoing to us what's new in the latest release-- wait, he just 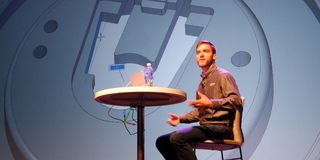 insulted us in the media as being not bright enough to figure out math. (See figure at right.) I guess he doesn't realize that some of us have our engineering degrees, even a PhD, but we love to write.

Well, now I have to stop writing, because there are no electrical outlets provided for the media to keeping powering our laptop computers.

[Disclosure: Siemens PLM paid for my airfare, hotel, and some meals.]

Posted at 05:40 AM in Travelogues | Permalink

Hahaha - nice perspective on the show for the 30k foot overview... seemed like everyone there was enjoying themselves greatly (and I hope you did too)!

Oh, and sorry about the media comment on stage - it certainly wasn't meant as an insult, but I do have a tendency to run with things on stage, and earlier this year I did a physical launch demo for an exclusive crowd of media folks and every math based question I asked returned crickets.

I'll have to petition to bring some more of the engineering oriented writers out next year!

I might be able to put in a good word for power outlets as well ;)