Here we are at conference #4 in Europe, this time at the European Forum for 3D users of Spatial's toolkits. This division of Dassault Systemes is best known for the ACIS modeling kernel, but also is the "retail" source for the modeling kernel used by Dassault's software, CGM, the 3D Interop collection of translators, and additional software.

Spatial is kind of like the ODA, so that they don't sell to end users, but provide technology used by CAD software companies. Often, Spatial and ODA implement new functions, which their CAD customers adopt, and then tout that they did it themselves.

And so it is a bit odd to hear them talking about user experiences, when the "users" are CAD vendors. 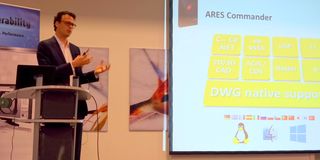 Robert Graebert is chief technology officer of Graebert Gmbh and is at the 3D Forum to describe his company's use of CDS (constraint system) and ACIS for solid modeling. More than 7 million users since 1994, with Graebert CAD software used by Dassault Systemes (heh, the loop), Corel, Onshape, ProgeCAD, CADopia, MC4, and SKA.

"Ideally you want to take your technology to all platforms," he said. And so Graebert has done this with its core software being written to be independent of the operating system. As for ACIS, Mr Graebert gives credit to the ODA for working with Spatial to integrate ACIS into Teigha; all Graebert needs to do is add the user interface to implement the solid modeling functions. Graebert actually provides its OEM customers two versions: ACIS view-only and ACIS editing.

Graebert had more work in integrating CDS constraint system, and was only the second CAD company to do so, according to Spatial. Now Mr Graebert is describing how they did the process. "Some things you might want to consider," he notes, because there isn't a one-to-one correspondence in entities types.

Next up is Extend3D with Werklicht Pro [German for worklight], a Munich company that does augmented reality for manufacturing. You really have to see the video to see how it works, but I'll try here. Targets on the piece being manufactured, like a transmission, position a camera that also uses two rotatable mirrors to accurately locate a green laser. The laser tells the worker where to place his tool, such as a drill.

The video showed how as the transmission was jostled back and forth, the camera-laser was able to follow along, albeit with a bit of a delay, say a second or so. Now, how does this connect to the CAD system?

Werklicht uses SpaceClaim to position the markers on the 3D model. When physical markers are put on the same spots on the transmission, the software is able to know where to position the laser.

One problem, the speaker noted, that bolt positions  currently have to be imported into SpaceClaim as CSV files! In the future, they hope to add automatic target placements.

Now we hear from Erik de Keyser, ceo of Bricsys.  He notes that they have 250,000 paying 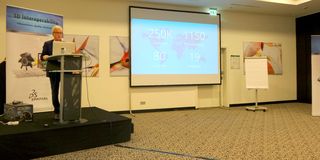 customers, the first time I have heard a customer number from the company. He emphasizes that these are paying customers, perhaps a reference to Graebert having 7 million non-paying customers!

He reminds the audience that even though Autodesk is pushing 3D, their two primary products -- Inventor and Revit -- have file formats different from each other and from AutoCAD.

In contrast, BricsCAD does MCAD and BIM using DWG. While AutoCAD has only 2D constraints, BricsCAD also has 3D constraints. This is the result of four years of effort in implementing their own constraint (not the one from Spatial, ahem), direct modeling, surface modeling, deformable modeling, and a multi-CAD translator.

He gets into a discussion of just how unsuitable Revit is to users, who typically start concepts in SketchUp, switch to modeling in Revit, and then do detailing and plans in AutoCAD -- and each one with a different file format.

Gotta say one thing: Bricsys has the nicest slide set of the presenters this morning! (We also heard from a 4th company, but I had difficult following what they were offering.)

Stay tuned for the next session, What's next for 3D modeling?

[Disclosure: Spatial provided me with one night's hotel stay.]

Posted at 12:20 AM in Travelogues | Permalink