« Teigha for Mobile Platforms | Main | Next week in upFront.eZine: first mobileCAD to draw with constraints »

Now we are hearing about Teigha Architecture, not Teigha's architecture, which we heard about before the break. This one is for architectural design planning and is an extension to Teigha Core: design a building model with intelligent objects, and then take 2D sections and elevations. The objects are compatible with AutoCAD Architecture, and so objects can be used in both programs.

(Intelligent objects are like walls, windows, and doors. They contain data that identifies the manufacturer, size, stock number, and so on. They are intelligent: if you move a wall, the embedded windows move with the wall. Styles define the appearance of windows, doors, etc. Changes made to the floor plan are updated in the 3D model, and vice versa.)

Teigha Architecture currently handles objects from versions 2000 through to 2016, 2D and 3D rendering for all architectural objects, display representation, object creation and modification, and snap and grip points.

Documentation objects include 2D sections, dimensions, schedule tables, and spcaes. I wouldtake a picture but the Prague sunlight is flooding the conference room's floor to ceiling windows. 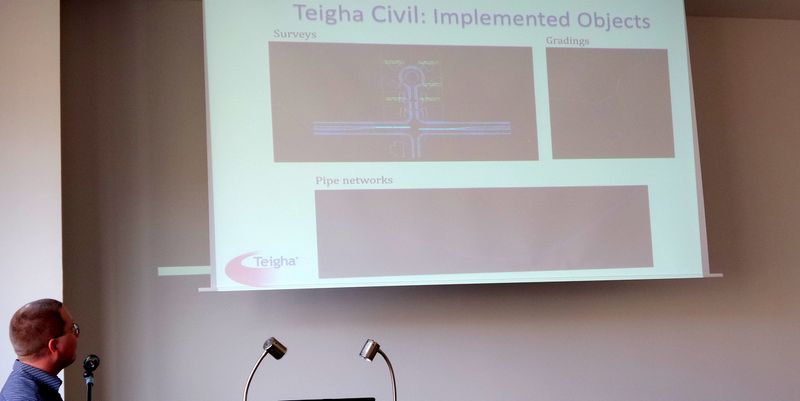 Showing off Teigha Civil, after the sun went behind a cloud

Also an extension for Teigha Core, Civil is for civil engineering, like roads, bridges, and earthworks. Like Architecture, it is a SIG (special interest group) project, which means it is not an official programming project by ODA but of a group of interested ODA members.

It supports Civil objects between 2007 and 2016, renders supported objects, but creates only some objects. The SIG has many plans to improve it, such as transformations, recover corrupted projects, public API for data extraction, and a way to remove all Civil data from a DWG file.

To end the day, we are learning about a new SIG project that I cannot talk about for another year. It is currently in alpha status, but will fill as big a hole in the CAD industry as the ODA (and its predecessors) did for opening up DWG. Eventally it will cover 3,500 classes.

And that's it for the Teigha Developer Conference for 2015. Tomorrow is one-on-one meetings, and I'll report on them in an upcoming issue of upFront.eZine.

Posted at 07:47 AM in Travelogues | Permalink