« What do ODA users want? | Main | Teigha for Mobile Platforms »

C3D is the fast moving 3D modeling kernel from Russia. No, not the one funded by the Russia government that no one uses (so I am told), but privately developed some 25 years ago for the KOMPAS-3D MCAD software by ASCON -- the largest CAD developer in Russia.

Couple of years ago, they decided to make the C3D kernel available generally, and formed a new division to adapt it to outside use, license it, and market it. As it now normal for ASCON, they spun it off as a separate division responsible for its own profits and losses. After two years, they have signed up 17 CAD vendors and universities inside and outside Russia, and now they have adapted it to Teigha. 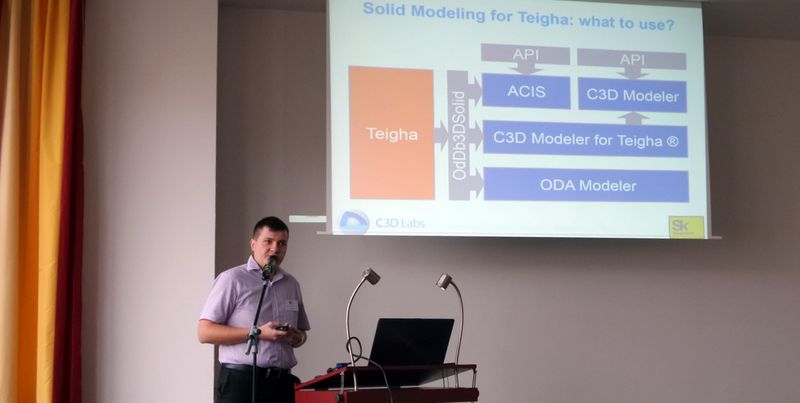 Oleg Zykov from C3D Labs describing his kernel for Teigha

The Teigha has limited functionality, because then it is easier to implement and you pay no royalties. It does only solid modeling: it is half way between the Teigha modeler and the ASCI modeler.

It will go into beta on December 3, and then distributed by the ODA itself. Flat license fee, no royalties. It runs on Windows, Linux, Mac OS, Android, C++, and C#.

The full version of C3D is available separately from https://c3dlabs.com/en/

Posted at 04:07 AM in Travelogues | Permalink

Its ACIS modeler not ASCI

Heavens to Betsy, a typo?!