At the ODA's annual developer meeting in Prague

Alright, here we are in beautiful Prague. Geographically, we are in Prague 6, the diplomatic area where many embassies are located, just north of Prague Castle. No wonder the hotel we're in is the Diplomat Hotel.

I am here along with fellow CAD journalist Randall Newton, typing madly to keep up with the 16 presentations today, a new one every 20-30 minutes. As Randall says, we have to remember that this is a developer conference, not a user conference. This means that some of the things we hear about we cannot report.

(Before I forget, my disclosure statement: The ODA paid for my airfare to Europe and my hotel accommodation in Prague, as well as meals today.) 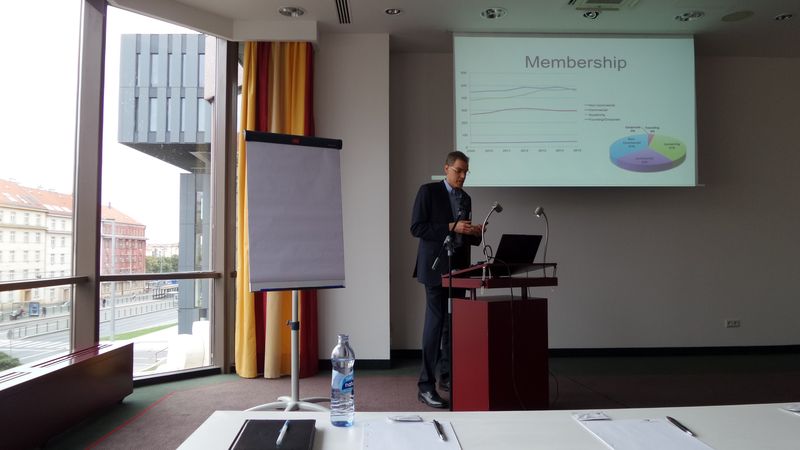 It is interesting to listen to the presentations, as I learn how some of the internals work. For example, to put a box around MText, DWG uses extended entity data.

"Today," began ODA president Neil Peterson, "we are no longer just an import-export library." Teigha is a full development framework, upon which CAD systems can be built, including custom aware objects built on the extensible object model. Tiered royalty-free licensing, starting $100 a year for start-ups.

Getting close to 20 years old, the ODA is father to thousands of applications developed by 1,200 members that are being used by millions. The effect is laddering, as those who build CAD systems on Teigha are now seeing vertical apps being added by third-party developers.

"We are a development organization," said Mr Peterson, "and the qualities that guide our organization are:

ODA uses VMware to manage the visualization of all the platforms and configurations and compilers at a professionally-managed data center in Arizona. We're talking variants of Windows and Linux, and versions of OS X, Android, and iOS.

In addition to providing Teigha for DWG and DGN files, the ODA has integrated optional libraries. This is done as a convenience for members, who can optionally use them but pay for them separately:

Strategic directions for the ODA include...
- Strengthening the core platform
- Expanding the platform to Teigha Cloud and PRC (3D PDF)
- Adding special interest groups
"We provide a technology, not a service," concluded Mr Peterson. "We don't want to lock customers into a service; [for instance], we want them to build their own cloud technology."

We have to remember that Autodesk originally did not provide access to DWG files, insisting instead that DXF was sufficient, even though 3D modeling data in DXF was encrypted. Only after the ODA was established did Autodesk suddenly come up with its own DWG API. So, thank the ODA for getting Autodesk to open up.

Posted at 01:36 AM in Travelogues | Permalink