« Next week in upFront.eZine: Q&A with Graebert on MobileCAD Design | Main | foto of the sunday: kayaking off Galiano Island »

How we photographed the sensors on a smartphone

Next week's issue of upFront.eZine discusses the resolution of the digitizer on the screens of smartphones and tablets. The reason that the iPhone works only with fingers is that this limitation allows Apple to use a really coarse digitizer, and coarser = cheaper. Other phone makers followed suit.

How coarse? 24x14. That's 14 sensors across the screen, and 24 up and down, for a spacing of one digitizer every 1/6th of an inch (half a centimeter, roughly). This spec is not something that ever gets discussed in the tech world; here is how I measured it.

I had noticed that in bright sunlight the digitizing grid became visible on the screen on my LG-manufactured Google Nexus 4. I wanted to get a picture of it for upFront.eZine #870, but ran into some problems.

A bright light is needed to see the sensors on the phone's screen; indoor lighting is not strong enough. I took the smartphone outside under an overcast sky. The camera, however, kept focussing on the clouds being reflected from the screen!

I tried a few things, like switching to macro mode (nope), switching to manual focus mode (nope), changing the angle of view (nope). Somehow I got the idea to try zooming in. That did it: I got around the reflection problem by taking the picture with the maximum 20x zoom, which minimizes the focal range.

Once the photo was taken, I enhanced the image using controls in PaintShop Pro. 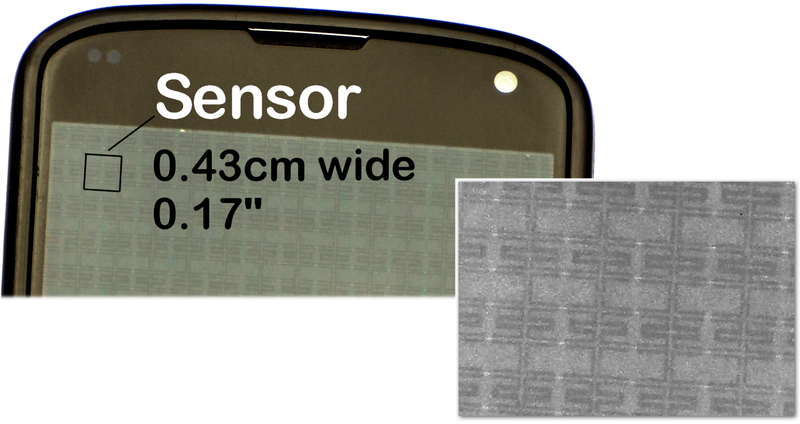 336 sensors on the LG-manufactured smartphone;
at right, 2x magnification

The capacitive digitizer on smartphones works by sensing the electrical current given off by the finger as it bridges the gaps between sensors. This is why you cannot use a traditional stylus with smartphones or tablets: the stylus is too narrow to bridge the gap, and it does not give off a current.

The type of stylus that works with smartphones has a broad, carbon-infused rubber tip that conducts electricity from your hand. I suspect that the old Palm Pilots could use a simple plastic stylus because the digitizer resolution matched the display resolution, and it relied on resistive (no electricity needed) sensors to record touches.

Tablets that make use of thin-tipped stylii use different technology, usually from Wacom; here's the details: https://en.wikipedia.org/wiki/Wacom_%28company%29#Technology

Posted at 01:11 AM in Behind the Story | Permalink