Fixing the sound that Dolby breaks

One thing that's puzzled me over the years is why computer manufacturers claim the sound on their laptops have been optimized by one sound company or another -- Dolby, Beats, and so on. Their tiny speakers all sound like tinny transistor radios from the 1960s. Well, come to think of it, my transistor radio had a speaker larger than any laptop, and if I positioned it just right between the end of my bed and the wall, I even got some respectable bass out of it.

OK, let's reverse it. Why would a respectable-sounding sound companies like Dolby and Beats attach their name to the tinny sounds coming out of smaller-than-matchbox-size speakers? Money, I guess. Laptop manufacturers want an edge with consumers ("Look, daddy, it's got Beats speakers!"), and sound companies want the easy revenue.

Which brings me to Levovo. They include on their laptops and tablets software from Dolby that tunes the sound appropriately to movies, music, and so on. At least that's what the software intimates. (See the figure.) Playing with the settings, I heard no difference. One of the problems I faced, however, is that I could never tell if the round "power" switch was set to on or off. It glowed blue, either way. 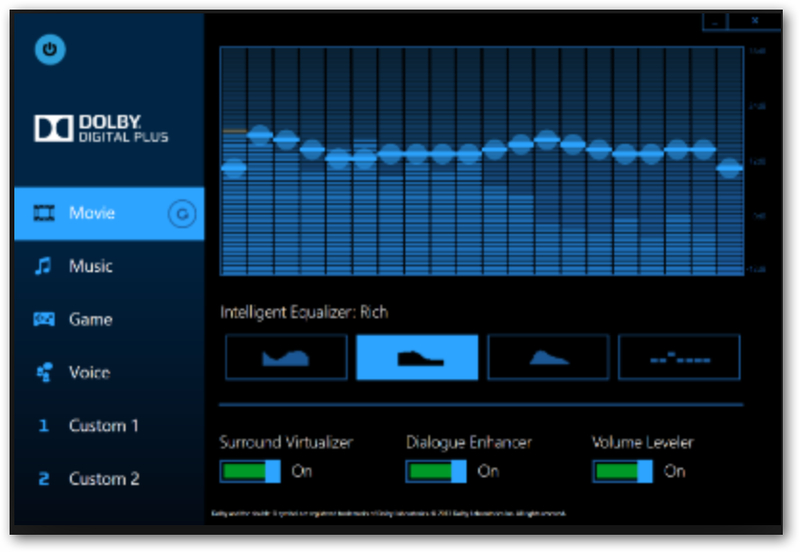 But increasingly I was getting irritated with watching movies on my Lenovo laptop. At 100% volume, I could barely hear the soundtrack. I resorted to using headphones and then later buying an external Bluetooth speaker.

One day, and I no longer recall the circumstances, I shut off Dolby Sound Digital Plus. Suddenly, I could hear! It was like a miracle.

Subsequently, I uninstalled Dolby's software from the computer, and have happily watches movies and Netflix, unassisted by headphones or external speakers.

So, why does "improving the sound" make the sound quieter? Laptops and tablets have limited power (Watts) available to power the speakers -- unlike real stereo systems. To give the illusion of more bass, laptops and tablets don't increase the bass: they decrease the sound level of the treble and mid-range. For the bass to increase, the volume must decrease.

(The opposite occurs in real stereos: they have the wattage to actually increase the volume of the

bass range, and/or the treble range, and/or the mid-range. My 1981-era Carver Cube amp, for instance, has 400W per channel, and you want don't your ears near the monster Polk Audio speakers when I max the bass and then crank the volume on the Yamaha parametric pre-amp all the way up to 25%.)

In contrast, a typical laptop provides 2.8W of power to its speakers, a tablet less than that. The other problem, of course, is that the smaller the area of the speaker, the less air it can move, and so ends up being quieter. As for good bass, half of the speaker needs to be isolated so that the low-frequency sound waves coming from the back of the speaker don't cancel out the ones at the front.

In short, Doby and Beats can't beat physics; getting good sound out of a laptop or tablet is not possible. As a result, paying for Dolby and Beats branding is as useful as to good laptop sound reproduction as eating yams.

So, that's why Dolby's sound enhancement made the audio worse on my laptop.  For a good chuckle, read how much Dolby is enthused about itself being on Lenovo's computers: http://www.dolby.com/us/en/mobile/lenovo-case-study.html

Posted at 01:36 AM in Hardware, Impractical | Permalink

Hah, the thing about beats speakers being a selling point for laptops cracked me up. I know a lot of people who seem to follow that pack.

I had a similar problem with my Lenovo - otherwise unexplained changing bass / volume levels! Turned off Dolby Digital and problem resolved. Thanks for the post.