Quite a lot, it appears

A few years back I would troll eBay to see how much tablet I could get for under $100. The result, something that cost me about $80, was pretty bad. The screen was resistive, meaning it might or might not register a touch. The vibrate function felt like a small motor was running inside, according to my son. Nevertheless, there was a sub-cult dedicated to optimizing the Android OS for this fat 7" tablet.

Two years ago, the 8" Chinese-designed model I picked up for just over $100 was dramatically different. It looked good, ran well, and then was absconded by my daughter for watching movies on her travels.

Last year's model was free, a 10" Lenovo that I won at an industry event. Solid-feeling but I couldn't stand the way that Lenovo customized the UI. Too many options, too confusing to use. I was relieved when my other daughter took it.

Last week I wondered how much a powerful tablet would cost. By powerful, I wanted these specs:

eBay does an awful job of letting customers compare similar products, but after opening a dozen or more tabs in my Pale Moon Web browser, I was down to two: one with the ARM processor that most Androids and iPads use, or one with an Intel CPU. I was intrigued by getting an Intel-powered Android but then read that some apps might not work with it. Not knowing if that was true or not, I went safe and got the ARM-based one. Also, I paid $7 for shipping to get it sooner than the 4-6 weeks most items seem to take with free shipping traveling from China. DHL delivered it to me in two working days.

The specs claimed by manufacturer Cube the page on eBay boasted the following for its Talk 9X model:

When the unit arrived, I was stunned. It came in a classy-looking cardboard box. Inside, a white cardboard envelope welcomed the new owner with details, mostly in Chinese however. An anodized aluminum back. Even details on the thin power and volume buttons. The quality was Apple-like. Solid feeling. But heavy, too, due to the big battery yet just 7.7mm (0.3") thick. 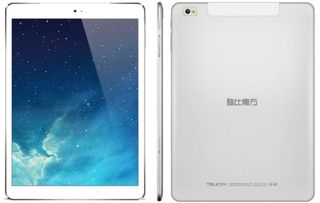 Those eight CPUs run like hot stink, getting a rating of 54,000 on the Quadrant benchmarking software. By comparison, my Nexus 4 gets 20,000 for CPU speed. I can tell the Cube is fast in the one area that Androids are always slow at: downloading and installing updates of apps. Androids usually stall during the process, but on this one I didn't notice a thing.

So, how does Cube get the price down to $208? By cutting back in other areas. Quadrant reports that the memory speed is slower than typical, as are the 2D graphics. But I think Cube got away with it because the CPUs are so stinking fast. Also, the cameras are nothing to write home about.

Since the Cube has Apple-like quality, I wondered how an equivalent iPad would cost. The iPad Air 2  is 1.4mm thinner, weighs 116 grams less, but has the same height x width and the same resolution of screen as the Cube Talk 9X.

We don't know the speed of the iPad's CPU, for Apple never reveals this important spec. Nevertheless, an iPad Air 2 with 16GB RAM and SIM card slot costs $630 -- so 3x more than the Android-running Cube Talk 9X.

(See this page for a comparison between Cube Talk 9X and the older iPad 3: http://www.devicespecifications.com/en/comparison/063435efc.)

This looks good, Ralph! Apart from the fact that the OS is a bit dated (Jelly Bean) it seems to tick all the boxes. Does it run stock?

It runs stock Android. In any case, I prefer Jelly Bean (Android 4.4) over Lollipop (Android 5.x).