« Microsoft doesn't want you printing folders; we show you how | Main | The best apps that I'm running on my Android today »

Kingo to the rescue

The latest cheap Android tablet I bought through eBay from China is an Ampe A88 for $123. When I have a choice in tablets, I like 8" screens and white bodies, and it is surprising how few models are available through eBay in that configuration.

I had to buy another one, because Android tablet #1 now serves as our bedside Internet radio; tablet #2 went along with my daughter living in Germany; and #3 was absconded by the other daughter living in the next city who wanted to watch news while making dinner. So here I am, a tablet-less technical writer -- it's just not right to be without Android! 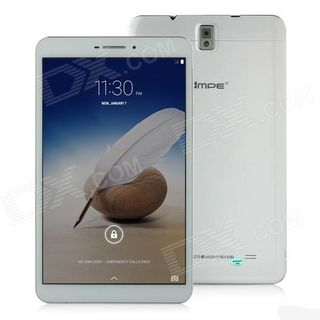 This A88 is not just a tablet, but an 8" phablet, for it has the phone function built in + slots for two SIM cards. That's right: an 8" phone. Other specs include 1.3GHz 4-core CPU (so faster than a Macbook Air), a microSD slot to add up to 64GB storage (I had a 32GB card laying around), but just 1GB RAM and 8GB (net 4.5GB) built-in storage. That 1GB became the source of this blog posting.

As I added apps and replacement home screen launcher, the tablet began telling me that there wasn't enough space to add more -- even though there was 200MB free, and most apps are in the 1MB to 50MB range.

The first solution is to move apps to the oddly named USB memory, which is the regular storage RAM (8GB in this tablet). But this solution has its limitations:

Researching the problem through Google resulted in three conclusions:

The other times I tried rooting an Android device either didn't work or destroyed the device. Naturally I was hesitant, but the more I read the more I realized I could gamble on destroying this $123 throw-away tablet.

Then I came across a blog posting recommending Kingo Root, Windows software that does the rooting for me. All I needed to do was follow the on-screen instructions, like insert the USB cable and switch the device to USB debugging mode. The rest was handled by Kingo. www.kingoapp.com

Now that it is rooted, now what?

Job one: install SuperSU from the Android app store. This utility alerts you when other apps try to access the root of your device.

Job two: To remove unwanted bloatware, get System App Remover from the app store. It lists all the apps on your device, suggests which can be -- or should not be -- removed. Removed apps are stored in a recycling bin, in case you want it back. I removed Chinese language apps, the default home launcher, along with live wallpaper applets.

Job Three: To move apps to SD memory, use an app like Link2SD or Force2SD.