Reprinted from CADdigest.com; by Ralph Grabowski

I've been looking at TurboCAD ever since the days it ran on MS-DOS and so watched its progression to Windows, and then to Macs and iPads. Today it is a program that handles nearly every aspect of 2D drafting, 3D solids and surfaces through history as well as direct editing, constraints and parameters, BIM design, visual styles and rendering, and programming.

IMSI/Design software has one of the largest ranges of CAD software, with multiple products for Windows, Mac OS X, and iOS. The one I am reviewing here is TurboCAD 2015 Pro Platinum, and it is the top-end version of TurboCAD. It is priced at $1,695 for a perpetual license or $499 a year on subscription. This is a better than other CAD vendors who charge full price for the CAD system upfront, and then tack on annual subscription costs.

Should you not need all the functions of Pro Platinum, IMSI/Design offers versions of TurboCAD at lower price points: 2D/3D Pro ($1,495) without enhanced mechanical and architectural functions, 2D/3D Deluxe ($129), and the 2D-only Designer ($39). The software runs on Windows Vista, 7, and 8 computers.

It may come as a surprise that DWG is not its native file format. Instead, TurboCAD uses its own TCW format for storing drawings. But it uses the same Teigha libraries as nearly all other CAD programs, and so opens files made by AutoCAD or IntelliCAD, and can export drawings in DWG format. If you prefer to work natively in DWG, then the company offers TurboCAD LTE, software "that works like AutoCAD LT."

With Autodesk resolutely moving away from perpetual licenses and toward server-based CAD that's only rented for a time, some users find themselves looking for replacements to the aging AutoCAD warhorse. There is a thriving group of alternatives of which many users seem unaware. Now, this tier of DWG editors don't necessarily provide everything that Autodesk bundles into its 2.5GB AutoCAD package, and that's not necessarily a bad thing if you aren't into things like point cloud processing or mapping. On the other hand, the alternatives often include functions not found in AutoCAD and so become valuable in their own right.

For example, I like that TurboCAD has a single Open command; there is no separate Import command. It imports an impressive number of useful file formats that cost extra with other programs. Some users might want TurboCAD only because it reads and edits a number of formats that AutoCAD can't, like Autodesk's own DWF, HPGL plot files, IFCs exported from other BIM systems, and even FastCAD files. To see all of the file formats supported by TurboCAD see www.turbocad.com/Portals/1/Charts/Filters_Comparison.pdf.

The reason for this review is that IMSI/Design just released the 2015 version of TurboCAD, and so I wanted to look at the new functions it has to offer. I am going to highlight some of the features found in the areas of BIM, 3D modeling and 2D drafting.

IFC Support for BIM
TurboCAD has had features for architectural design for many years now. In addition to the typical slab construction method of designing buildings, it offers a house design wizard, digital terrains and a multi-landing stair designer.

One of the most significant additions to TurboCAD 2015 is support for IFCs (Industry Foundation Classes). This is metadata attached to elements of architectural designs that allows models to be exchanged and analyzed by other programs. (IFC export was added to version 21.) To test it, I exported a BIM model from another CAD program in IFC format (not DWG), and then opened the IFC file in TurboCAD. The drawing came through looking just fine, and so I checked the properties, which showed an IFC Operation (figure 1). The Format Painter now handles custom properties, so that data like IFCs are copied from one entity to another. This makes it easier to create new architectural elements that take on existing properties.

Related to BIM, TurboCAD adds roofs as a slab type for creating flat and angled roofs of any shape. We use the new mitre and edge cut tools to fashion the roof. (The mitre command makes two roof slaps meet automatically, while edge cut lets us choose from square and plumb cuts.) As well, TurboCAD now lets us specify the rise-run on regular roofs. Holes for chimneys, dormers, vents and so on are cut with the roof modifier, which also trims the edges of roofs.

3D Modeling Enhancements
TurboCAD's functions for 3D modeling are as broad as some CAD packages costing a lot more. In addition to solids and mesh modeling, it offers a gear design wizard, parametric parts, and constraints. There even are commands related to sheet metal design, such as flange, bend, and unbend. Platinum Pro includes the Part Tree for navigating and controlling the parts that make up the model.

In the area of direct editing, the Quick Pull (Modify > 3D Solids > Quick Pull) command now manipulates more than one face at a time on a single solid model. Hold down the Shift key to select the faces, which must be coplanar. In this sort of work, it is useful to turn on the Tools > New UCS > Auto Workplane by Face option so that the cursor automatically works in the face that it's over.

There are variations on the Quick Pull command that are new. An extruded polyline can be thickened with Quick Pull. Another new variation is that angled faces can be extruded by slope or by parallel angle: normally it is sloped, but holding down the Ctrl key while selecting the face extrudes it with parallel sides.

Mesh editing gets a new function: symmetrical editing. When we make changes to one part of the smooth mesh object, the same change is mirrored on the other half automatically. Meshes are meant for organic models used in industrial design, and are those that do not need to follow a rigid design. Your hair dryer was probably designed using surface meshes.

To look inside 3D models — whether pumps or houses — TurboCAD's cutting plane now works in draft and mixed visual styles (see 1-minute video in figure 2). The plane is moved and rotated with the Conceptual Selector tool.

To manipulate 3D objects more easily, there is a new Conceptual Selector. It moves, scales or rotates selected parts about each of the three axes. This is similar to tools found in other MCAD systems, but TurboCAD 2015 goes further, as I have come to expect from the makers of this program. Depending on which part of the gizmo I grabbed, I could distort the 3D model in a variety of ways. Scaling along one axis can flatten a 3D object into 2D. Essentially, it is non-uniform scaling made dynamic. I easily found this to be my favorite new feature for one reason: manipulating objects in 3D space is hard, and this Conceptual Selector makes it easy.

There's a new Wire Wrap command that I didn't test, but it wraps a "wire" (planar object) about a 3D solid. The wire can be used for sweeps and extrusions. We find it under Modify > Wire Wrap.

Drafting
Dimension text can be set to always face the user, no matter the angle. This is useful when changing viewpoints in 2D (rotating the drawing to better see a wing drawn at an angle) and 3D. This feature is called "non-rotating text," but works only when it is turned on. Turning it on takes two steps: (1) turn on OpenGL mode through View > Camera > Properties dialog, and then choose "OpenGL" from Rendering Type; and (2) in the Selection Info palette, set text to "Non-Rotatable" under Text > Transformation. As we rotate the 3D viewpoint, the text does not rotate and so always faces us (figure 3). 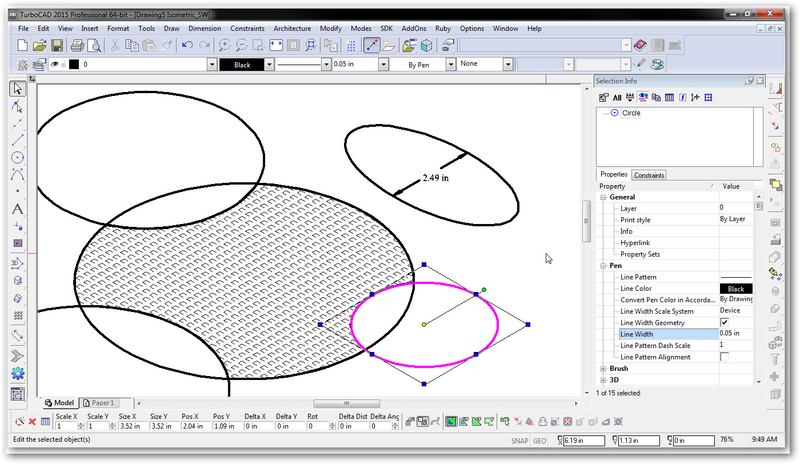 Figure 3: Three circles trimmed from a hatch pattern. In the upper right, the dimension text faces the viewer even though the viewing mode is isometric. TurboCAD is running in its Classic workspace.

When we trim certain closed objects or hatched areas, they maintain their closure; in the case of hatching, it keeps its boundary (Figure 3). To do so, use the Modify > Object Trim command, and then from the right-click shortcut menu to turn on the Extract Closed Contour from Closed Entity option.

Really long objects can now have multiple breaks to fit them onto a drawing sheet. These breaks are user-defined and so can look jagged, wavy, straight and so on. To apply breaks, click the Draft Break button on the toolbar of the Drafting palette (Tools > Palettes > Drafting).

More kinds of open objects can be joined with the Join Polyline Tool (found in the Modify menu). It is no longer restricted to polylines as it joins Bezier curves and splines without converting them to polylines. The interesting aspect to this function is that it allows us to make a spline that has a kink in it!

Conclusion
There are plenty of AutoCAD workalikes out there, but TurboCAD is not one of them. It does things differently, as do most other CAD programs, actually. For instance, the default command in TurboCAD is Line; to switch to selection mode, we press the spacebar.

Taking a different approach means that it can take a better approach. For example, TurboCAD's commands don't have options in the usual sense, and so there are (for instance) separate commands for Rectangle and Rotated Rectangle. This can be annoying in a command-line oriented CAD program, but TurboCAD doesn't have a command line by default. Everything is done with the mouse and cursor. This means it could lend itself well to computers with touch screens. (A command line interface is available through one of the workspaces.)

If there were negatives that I experienced, they were largely in the area of speed. For example, TurboCAD was slower to open the sample STEP file and slower to generate drawing views from a 3D model than I am used to.

Nevertheless, considering its price, the breadth of capabilities in TurboCAD Pro Professional is quite remarkable. Additions like the new Conceptual Selector make it so much easier to use.