My new 10x camera is also a smartphone 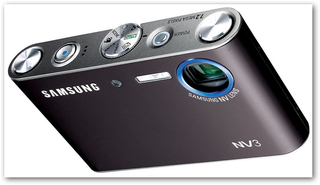 The NV3 is smaller than the size of a smartphone, yet has a 3x zoom lens that does not protrude from its thin body. Samsung fitted the zoom mechanism inside the body, using a prism to get the light rays to turn 90 degrees from the external lens. (Heh, it also embodied functions Korean companies thought important a decade ago: this camera could play back MP3 music and even display imported text files! No headphone connector; instead, those two chrome "dials" at either end of the top are speakers.)

Not that there weren't attempts, such as awkward ones to graft a third-party zoom lens onto smartphone bodies, or early attempts by Samsung to merge camera with Android. I tried one of the first attempts at the local electronics store, but the interplay between Android and camera functions left me disappointed.

Until a few weeks ago when I read a columnist who wrote that his Galaxy K Zoom was the ideal merging of the two functions. The phone is about a year old, and is based on the Galaxy S4 (I think) with its dual quad-core CPU. (One set of quad-cores runs fast, the other set is slower to save power.) I looked on eBay and found an unlocked one for $330 (it would be $660 locally). I ordered it in white. It arrived, and after my first photo expedition (the dim lighting of a newly opened museum here in town), I am pleased with the result. 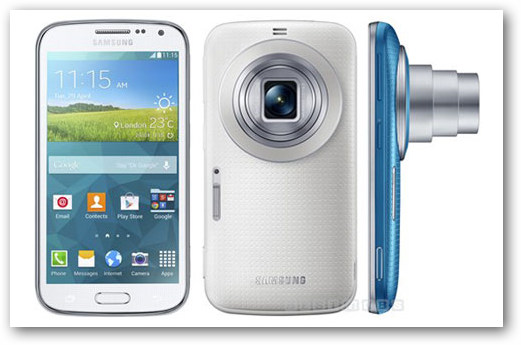 As you can see in the photo above, one side is an Android smartphone running Samsung's interpretation of KitKat v4.4, while the back side is the camera. It takes full advantage of the touch screen, so that I can take a photo by tapping any spot on the screen or by pressing the dedicated hardware shutter button.

To activate the 10x optical zoom, I can use the usual zoom motion on the touchscreen (spreading two fingers) or press the volume buttons. Digital zoom extends the range to 20x.

I can use Samsung's camera app and its many options, or Google's app (for photospheres and HDR images) -- or any other camera app from the Android store. The user interface is clean, which is what I like, and Samsung did a pretty good job of making options easily accessible.

TIP: I use both camera apps, setting Google's to have HDR (high dynamic range) turned on. Some photos are better with HDR, some better without. By tapping either camera icon, I get either mode without having to switch modes before being able to take the photo.

(The one hiccough is that the flash is xenon, not LED. While xenon is brighter than LED, it cannot be used as a flashlight, because it cannot be left on, like an LED bulb. This is a function of my smartphones that I use a lot. The workaround is to use an app that make the entire screen white.)

Naturally, this smartphone is twice as thick as a normal one. OTOH, it has a replaceable battery and a microSD slot. I've ordered a double-size 4400mAhr battery from MugenPower (which includes the replacement back cover), and I inserted a 64GB memory card that I had laying around.

So why a camera phone? Androids do something that no regular camera does: transmit via Dropbox photos to my computer as I am taking them. I've tested four WiFi-equipped cameras, including one from Samsung and two from Canon; I guess their punny CPUs don't multi-task, and so they cannot send photos over their WiFi system until they are in Playback mode. Then their transmission speed is so slow that it is faster for me to hook them up with a USB cable to my computer.

I like walking into my hotel room and by the time I open my laptop computer, all the new photos I took are already there. In particular, I want photos to magically appear on my computer as I am taking them at conferences that I live-blog.

(I was particularly disappointed in the WiFi function of the Samsung point-and-shoot camera I tested, as it included Microsoft's competitor to Dropbox -- whatever it is called -- in the camera's firmware. But it was horrifying to use: the pictures were downsized before being send via WiFi. Samsung has equity in Dropbox, but I waited in vain for a firmware update to add Dropbox to the camera. The Galaxy K Zoom provides 50GB free storage with Dropbox, albeit just for two years.)

So, there you have it: an unlocked Android smartphone for the price of a point-and-shoot camera, with the 10x camera thrown in for free.

Posted at 01:52 AM in Digital Photography | Permalink