3dconnexion is best known for its line of 3D mice, including most recently a cordless model. So it may come as a surprise that their latest model is a 2D mouse, and a corded one at that.

The 2D CadMouse is designed to compliment their 3D mice. Well, 2D mice always have. The demo jocks show off how they can design in MCAD with the 3D mouse in the left hand, and the traditional 2D one in the traditional right hand (for the 90% of the world that's right-handed).

I could never get this real-time panning and zooming to work until I clued in that it didn't work because I had redefined the scroll wheel's button for double-clicking. My solution has been to buy multi-button mice, and then program one of the side buttons to double-click. After a while the brain memorizes this new position, and it's not so bad.

With this background behind us, we see why 3dconnexion is excited about its new CadMouse: a multi-button corded mouse (so no need for batteries) with a middle button and the scroll wheel. 3dconnexion tells me that wireless mice are banned from some workplaces for security reasons.

The middle button is invisible, and so 3dconnexion provided this picture to show its location: 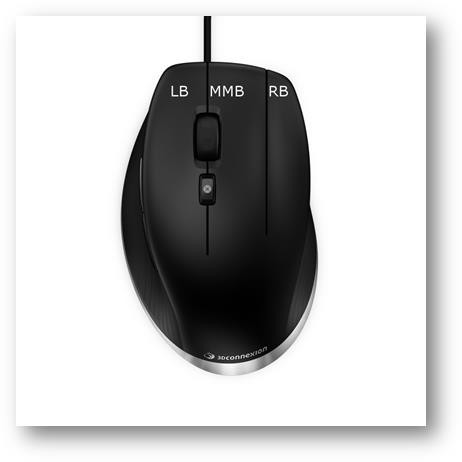 In addition, it has side buttons and an extra "Radial Menu" button behind the scroll wheel, all of which can be redefined. The mouse ships at the end of February for $99.