« Available now: BricsCAD V15 for AutoCAD Users | Main | This is how much more you'll pay for Autodesk software »

Kinda handy, as it turns out

A couple of years ago, I bought one of the very first smartwatches. It was made by Sony, communicated with Android phones, and cost $99. I bought it from England through eBay, as the watch was never released in Canada.

It had a four-point touch screen, but the low resolution, dim display, and the need to recharge it daily meant it soon ended up in my graveyard of watches. (Second shelf, third bookcase.) In particular, it did not communicate well with the Android phone, probably because Bluetooth communications protocols were not as robust as they are today.

Next, there was the Nike exercise tracker band that Autodesk gave to the press at some event or another. I found it useful for seeing how many calories I burned in my exercise regime (a long walk each day, weekly volleyball games). Worked out to 100 calories per hour, and now that I knew, I no longer needed it. The rubberized skin irritated my skin, plus it would never work with Androids (so Nike vowed), and so I gave up on it.

With the current tech mania over smartwatches rekindling my interest, I wondered which one I should get in a third attempt. I didn't care for ones that needed daily recharging (I want to be wearing my watch at night), or have plastic or leather straps (they don't work well with my skin).

Around Black Friday, I read of Pebble, one of the first in the newer generation of smartwatches. That week I got the Pebble Steel on sale direct from the vendor ($150+$20 for steel strap). It met my needs: 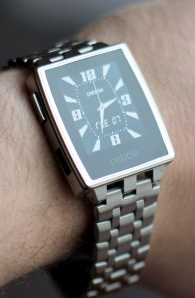 Plus it had the added attraction of being a history maker:

In practice the watch works well for me. I particularly appreciate that it reports notifications from my phone, such as incoming emails, appointments, and text messages. Using a cell phone while operating a car is illegal in our jurisdiction, but it's not illegal to glance at your watch!

The only additional app I use is one that displays the date, time, and weather for my area. A discrete dotted line reports the remaining battery life -- very classy.

Pebble can hold up to eight apps. A master app on the Android loads and unloads apps; it also keeps additional apps (that aren't on the phone right now) in a "warehouse" on the phone. The Pebble app provides access to dozens of apps for the watch, although most tend to do with the display of the time, weather, or your exercise results. A few are more ambitious, such as displaying a map, but these look crude and run too slowly.

The only drawback is the low 144×168-pixel resolution of the monochrome e-paper display (with back light). In practice, this is not a problem for my use of it, especially keeping in mind that it is responsible for the long battery life. But it does look dull compared with that Android watches are outputting these days!

I look forward to traveling with this watch, for two reasons. One, to remind me of appointments, etc. The other: changing the time to new time zones more easily. (I love my Citizen Eco-drive watch that I've owned since 2001, but changing the time with it is a pain!)

To end off: that Citizen watch (tells time and date) cost me $450 some fourteen years ago; the Pebble cost me $170 last month.

I love my Pebble, too, for about the same reasons. Try the Agenda Watchface, it shows digital time and the next Agenda entries from your phone. This comes in handy e.g. at trade shows where I have a tight schedule and camn always glance on my watch when and where the next date is.