This isn't the usual kind of CAD book. It won't tutor you on how to design 3D models or draw in 2D. No, it explains the underlaying mathematics that makes 3D CAD software possible.

And so it is to filled chock-a-block with mathematical expressions, matrix transforms, and generalized diagrams of CAD structures, such as Bezier curves, 3D surfaces, and intersections between elements. These are the topics covered by its chapters:

To give you a flavor of its style, here is the paragraph with which the book begins Chapter 1:

A geometric model contains a description of a shape of a modeled object. A geometric shape is described by surfaces. Curves are used for constructing the surfaces. Geometric design begins with curves. Geometric modeling uses curves that are easy to manipulate. Curves are controlled by changing the data used to construct them. The curves may be constructed using analytic functions, a set of points, or other curves and surfaces.

...and then it proceeds to assume "a Cartesian system with a fixed orthonormal basis in three-dimensional Euclidean space." This is typical of the book: a mixture of the easily read with hardcore math-talk. Some of it I recognize from my vaguely-remembered university vector math class.

With this kind of intense complexity (I wonder if the book should carry an IQ rating), you might wonder who this book is meant for. It's for students learning principles of CAD design, as well as programmers who write CAD software. 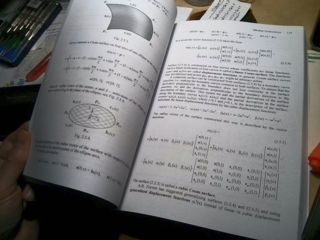 There is a misconception that CAD software is a small field, consisting of a few big companies and a few more small ones. Au contraire! There are thousands. This is the reason the Open Design Alliance has 1,300 members, most of whom use the ODA's DWG APIs for in-house software that's never seen by you or me. My son-in-law, for instance, is writing a software program that analyzes the thermal efficiency of steam boilers manufactured by his employer. And so there is demand for this kind of book of fundamentals. Pre-pre-pre-design, you might say.

The author developed the C3D geometric modeling kernel for KOMPAS-3D, the largest selling Russian 3D CAD system from ASCON Group. He wrote this book based on his 20+ years of experience. Might he be giving away the company's crown jewels? No, not at all. It takes a lot to convert mathematical formulae into programming code. This book is the foundation. You now have to build the house.

I want to give a tip of the hat to the person who translated this book from Russian into English. (No credit is indicated, although the writing style indicates an American.) The translation is flawless.

This book gives me renewed respect for the programmers who produce the CAD software which we so lovingly employ to create our designs.

This book intrigues me, but as a full time advanced CAD user without a maths degree, I'm not sure if it's for me?

Of course it's not for you! I once bought a book on NURBS that ended up much more about the mathematics despite it having "with a historical perspective" in the title and it didn't seem too maths-y from the short description. Like Ralph states, these books have their place for software developers but for users it's not very valuable (or I should say, there are many more valuable things to focus on reading)

You are right: so many books and so little time! I have on the go right now.

I would say regular people should buy this book to see what the math behind CAD software looks like. We would never read more than a snippet here or there; perhaps treat it as a coffee-table book.

We could even show it off to non-technical friends: "Yah, this is the sort of stuff I deal with in my day job."