About the aerial photography in Pink Floyd's new album

As I was buying a copy of Pink Floyd's newest album at the local store, the young sales clerk stared at the DVD-sized package for a few moments. Finally, she asked me, "Is this a movie or a music group?"

The cover art and included videos of "Endless River" show a man rowing a boat across a sea of clouds. Aerial photography was provided by Bluesky of England, and I'll let their press release explain it all: 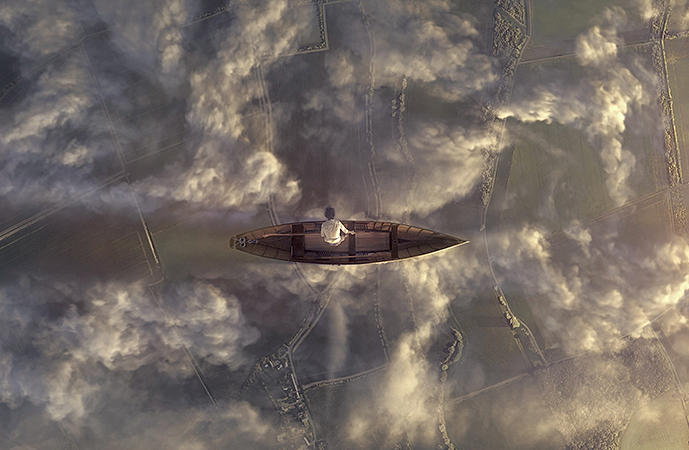 James Eddy, Technical Director of aerial mapping company Bluesky and lifelong Pink Floyd fan added, “It is a tremendous honour; Bluesky aerial photography helping to promote the last ever Pink Floyd album. It was also a great pleasure to work with Glassworks to bring their creative ideas to fruition.”

What's Next for AutoCAD Workalikes

Press releases from Open Design Alliance are important, because they tell us today what AutoCAD workalikes like IntelliCAD, BricsCAD, and ARES (DraftSight, CorelCAD) are going to be doing tomorrow.

ODA's API is called Teigha, and it gives them and a thousand other CAD developers access to file formats like DWG from Autodesk and DGN from Bentley Systems. In addition, ODA makes it easier for the companies to implement complex CAD functions, such as ACIS-based solids modeling.

This week, ODA announced v4.0.1 of Teigha with these added functions:

ODA members can now implement these functions -- or not. The point is that it is easier for them to do things like implementing arrays that automatically update themselves. ODA does the heavy lifting.

It depends on the direction

I love checking numbers, and so I was interested when Dell joined Autodesk in announcing a new study. It said that you would be more efficient if you just would spend more money with them. (Had the study found the opposite, it would not have been released, naturally.)

Here's what part of the press release that interested me the most:

The two companies just released a joint study that outlines the productivity gains that can result from upgrading your hardware and design software -- and results found that by moving from AutoCAD 2010 to 2015 and upgrading from a Dell Precision T1600 to a T700 tower workstation, customers can achieve a productivity improvement of 92 percent!

Autodesk has over the years released other studies that "proved" increased efficiency by upgrading to a newer release. Someone once added up all the percentages, and we would now be completeing drawings in something like seconds, if true.

The most infamous one claimed that the ribbon made AutoCAD users 40% more efficient than using menus and toolbars; later, when the Mac version came out, it had no ribbon. I insolently asked Autodesk marketing if this meant that Mac users were 40% less efficient than Windows users, but never received an answer.

Converted to decimals, the timings were 10.18 hours (for the old system) and 5.32 hours (new system). Just by eye-balling it, we can see that the fastest system takes about half the time of the slowest one. Calculating the percentage, it is 48% better. 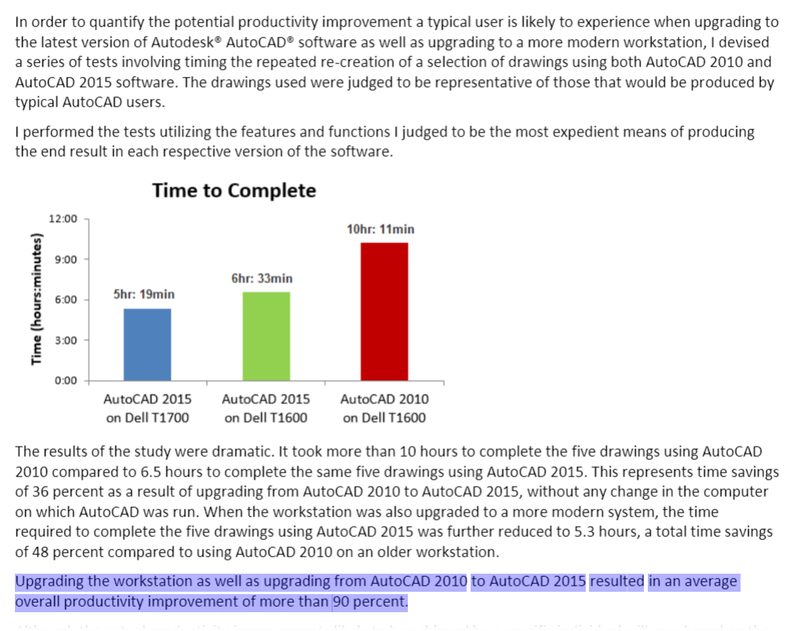 The study says the improvement is 92%. If the fastest system truly were 92% faster, then its timing should be around 1/10th that of the slowest one.

Percentages are tricky to calculate, because their value depends on the direction of the calculation. It appears the study author calculated up (from 5.32 to 10.18 hours) instead of down (from 10.18 to 5.32).

Here is a site that helps perform the tricky percentage calculations:  www.percentagecalculator.net.

As I researched for an article that will appear in the January 12, 2015 issue of upFront.eZine, I was racking my brain about an Autodesk MCAD product called "Designer." I knew it existed briefly, but could not find any references to it on the Google. I asked editor friends for help, and some of them thought it might be connected to Autodesk's acquisition of Woodbourne, whose most famous employee was "Buzz" Kross, today the head of Autodesk's MCAD division.

(Woodbourne was located in Lake Oswego, Oregon, explaining why Autodesk's MCAD division is still headquartered in the Portland area, instead of Marin County, California or even Novi, Michigan.)

After several days of on and off again searching, I finally came across a press release from November 1993. (Here's a test for you: try searching for "AutoCAD Designer" and see what you can't find!) This is the relevant part from the only source I could locate, www.freecadapps.com/uploads/info/designer.txt:

AutoCAD Designer automates the production of mechanical designs and drawings by integrating a feature-based parametric solid modeler into AutoCAD.

With bi-directional associativity between the 3D model and drawing, users
obtain powerful dimension-driven editing during the design and drafting process.

AutoCAD Designer resulted from Autodesk's acquisition of  Woodbourne, Inc., a privately held corporation located in Lake Oswego, Oregon.  Prior to the acquisition, Woodbourne was an Autodesk third party developer and creator of Design Companion.

"With AutoCAD Designer, we've taken the best parts of parametric design and adapted them to the needs of AutoCAD customers."

As I recall, AutoCAD Designer went nowhere as a stand-alone product. The price was $1,500 and ran on DOS. Released at the same time was AutoCAD Surf, which gave AutoCAD 3D surface modeling, also for $1,500: free-form NURBS curve and surface modeling with blending, filleting, sweeping, automatic trimming, and surface offsetting.

After the two add-ons disappeared, the parametric and surfacing functions would not reappear in AutoCAD until releases 2011 and 2010, respectively -- 17 years later. One other note: Mr Lynch later moved to Bentley Systems. 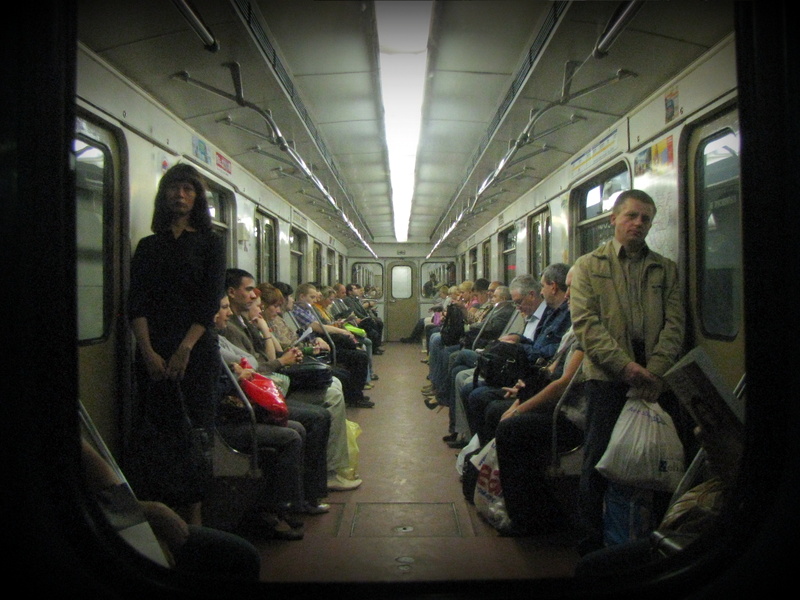 Hard to believe that it's been five years since I visited Russia. Here's a photo I snapped of riders on the Moscow subway.

This week in upFront.eZine: it's our annual book review (revived)

Some subscribers noted that I haven't kept up with an annual feature in which I wrote about the books I've read. Here we return with this year's list.

You can read the book reviews at www.upfrontezine.com/2014/upf-840.htm. This is the last issue of 2014, as upFront.eZine takes its annual break over Christmas. Look for the next issue on January 12.

This week in upFront.eZine: we expand upon the failure of browserCAD

In this week's issue of upFront.eZine newsletter, :

Oh, and readers keep responding to our article on user interfaces. You can read all about the business of CAD at www.upfrontezine.com/2014/upf-839.htm.