Update on BIM by Bricsys

With BricsCAD running on the Mac (and due to be released after the Windows version of V15), we are now seeing that the same 3D modeling for architectural also working on the Mac version. (We need not remind readers that AutoCAD for Mac is feature-incomplete, even in the latest 2015 version released yesterday.) So we are seeing more of the 3D house modeling but now on the Mac.

But what about BIM -- the information that's attached to building model? During lunch, I had the chance to ask ceo Erik de Keyser about this. He agreed that today, we were mostly seeing 3D modeling in BricsCAD BIM, but that there is much more to come in the next 4-6 months. Mr de Keyser describes his version of BIM as "SketchUp for DWG users."

Lunch is over, and now Mr de Keyser gives his roadmap for BIM: To turn BricsCAD BIM into actual BIM, the materials database will be added to a later release. The link is through custom objects (not attributes, as I had speculated in another blog post). (More on the use of custom objects below.)

IFC export exists now; IFC import will come in another release; it is being worked on right now. "It would not make sense to write an IFC importer if nothing can be done by BricsCAD with the data," explains Mr de Keyser.  BricsCAD will understand BIM data through IFCs: "BIM completeness" is the term being used here to describe BricsCAD BIM.

Mr de Keyser continues: "I am not sure BIM is being adopted because people want to adopt it; they don't love BIM. [During a break, another attendee told me that he knows people who hate using BIM, because of how it restricts their design ideas.] We want to make it better." He makes it clear that BricsCAD will also handle structural, MEP, civil, and GIS elements.

"Architects using DWG may never need SketchUp any longer," he says. Now, SketchUp is cheaper by a few hundred dollars, but works only with ignorant faces -- a serious drawback -- and not solids. So DWG and 3D solids together might make BricsCAD more appealing to architectural offices than SketchUp.

"Our goal is to complete this, and make BricsCAD a BIM platform." He hopes third-party developers to help add to the BIM capabilities. But he has this warning: we cannot wait forever, and so if necessary we will act [if third-party devs do not].

Bricsys is setting itself up to  make plays all these areas:

His conclusion: "We will start where the projects start: intuitive modeling. We will work more forward faster than anyone else, as we have the interface in place."

Now someone (sorry, didn't get the name) from SimpleBim of Finland showing how the BricsCAD model looks and can have data attached to elements. "Imagine the SimpleBim functionality integrated into BricsCAD," he says. 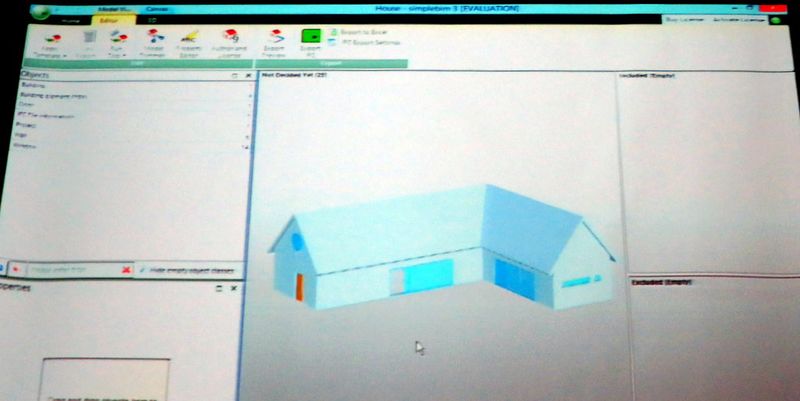 BricsCAD has the key components needed for BIM modeling, we learn next from cto Luc De Batselier:

Parametrics has more use than just doors and windows, we are told. "We think we can use them for components, instead of dynamic blocks -- which have their own drawbacks." For example, dynamic blocks work well only in 2D, whereas parametric components in BricsCAD are true 3D.

BricsCAD recognizes walls from their geometry; it also recognizes connected walls, so that walls can be moved connectedly. This is important for imported geometry, and if they are modeled in a normal way, then BricsCAD will also recognize the elements. 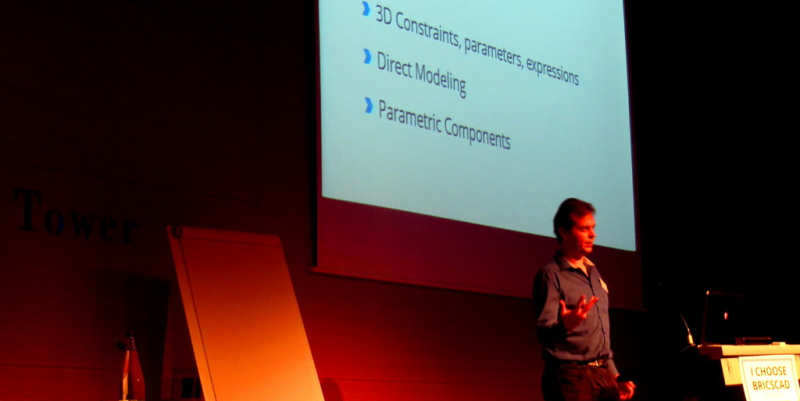 The technical approach: "We have deliberately design BricsCAD BIM to avoid the use of the command line as much as possible, and avoid use of settings," we are being told. "We extended the OPM API to handle BIM, and now there is a new C++ API that offers more possibilities -- and it is multi-platform (it is not tied to COM, and so is usable on Mac and Linux).

About BIM in DWG: "The word 'custom objects' was mentioned, which only is used to store extra data in DWG's dictionaries. We use only native entities in drawings, like native 3D solids and blocks. Native entities are also only used for 2D generated drawings; no hassles with proxies or whatever."

What is meant about parametrics: "It is based on our constraint technology, a technology that is going further than history-based modeling or parametric change engines.  Our approach offers greater technology and freedom, although not everything is there yet -- such as cyclic conditions. We have constraints possibilities that other systems do not have, such as inequalities."

The API plan: "BIM API = BricsCAD/DWG API + extensions, and multiplatform. Already available are the modeler, Quad cursor, C++ OPM, and 2D constraints. But that is not enough. The next steps are 3D constraints-parameters-expressions, pparametric components, IFC streaming, more database connections, and collision detection."

Mr Luc De Batselier concludes, "This is a logical first step. There are things we have to focus on in the next months."

Posted at 06:35 AM in Travelogues | Permalink