« This week in upFront.eZine: The End of the 3D Revolution | Main | Dassault can't decide: should it be SOLIDWORKS or SolidWorks? »

On top of all else, Solidworks 2015 also does 3D printing

With every major release of a CAD program comes a dilemma: how to convey all that information?

Solidworks 2015 is no exception; Dassault did its best to dumb down the changes -- there are literally thousands -- for the assembled press. As most of the press are not CAD users, the significance of most enhancements is lost upon us. For example, is the new Treehouse feature going to be a hit? I have no idea.

But Dassault missed a opportunity to trumpet one enhancement that would have resonated with all the media present. Say “3D printing,” and the Dassault folks would have stirred even the sleepiest oldtimer journalist in a post-meatball/calzone lunch-induced daze.

With Solidworks 2015, you can make 3D prints right from the menu. You have to have Windows 8.1. Microsoft had introduced a 3D printer driver way back in November, 2013 but neglected to mention that it was still up to software and hardware vendors to create drivers to make 3D objects actually appear. 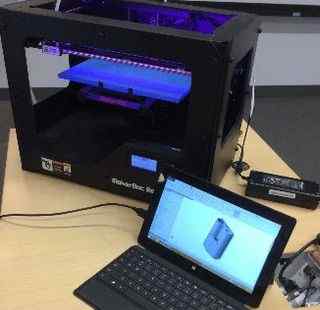 "Solidworks 2015 is the first CAD vendor to come through on the 3D printing promise," says Aaron Kelly, product manager at Dassault. To show me how it was done, he was kind enough to wheel a Makerbot 3D printer. (The press had already started to file out.)

Sure enough, as Aaron clicks on the menu, the MakerBot printhead starts whizzing. The print volume is displayed in the Solidworks screen (see figure at left) as the MakerBot display showed it is printing a SLDPRT file -- the native part file of Solidworks. I figure the conversion to STL is either not happening or is invisible to the user.

Currently, the Print to 3D command only works with MakerBot 3D printers.

[Reprinted by permission of CAD Insider.]

Posted at 01:09 AM in Roopinder Tara | Permalink