« Dassault can't decide: should it be SOLIDWORKS or SolidWorks? | Main | My first few hours with Windows 10 »

by Ralph Grabowski, presented by Vivekan Iyengar, vp of R&D at Spatial

Spatial is the exclusive provider of Dassault Systems technology, no surprise, given that the 25-year-old company is owned by Dassault. Currently, its V5 and V6 translators are built using Dassault technology, along with the CGM modeling kernel; other specialized components from Dassault include hidden line removal and the constraint solver, which Spatial makes available to 3D application developers. Their two primary products, however, are 3D InterOp for translation and 3D ACIS Modeler, a geometric kernel for solids and surfaces.

For new functions in 3D InterOp, Spatial concentrates on data reuse. Developers who add 3D InterOp to their programs can limit how it works. It can read independently any and all of these sections of a CAD file:

It works with imported models as if they had been created in the native software, as 3D Interop recognizes features, like fillets and holes. 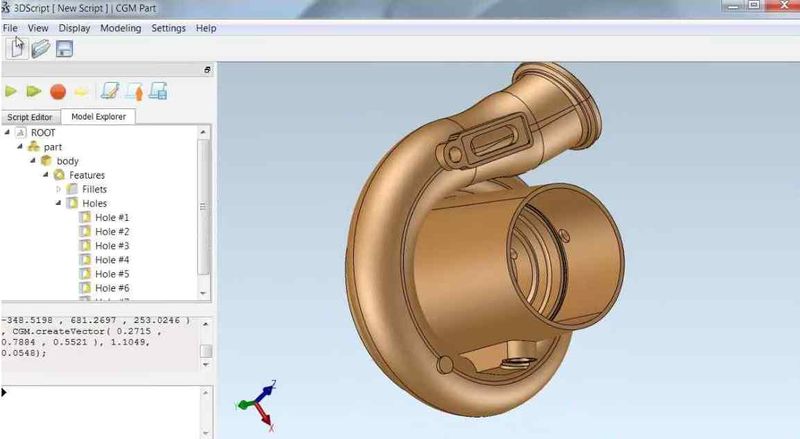 A part imported from a Catia CGM file

New in 3D InterOp R25 are readers for JT (from Siemens PLM) and 2D/3D DXF/DWG (from Autodesk). Both read the product structure, graphical data, and exact geometry.  After importing a model, 3D InterOp can...

R25 imports data about 2x faster than R24 (such as 7 seconds instead of 14 seconds), although the exact improvement depends on the format of the source file.

In summary, 3D InterOp captures all the design insight from the original model.

3D Acis is deployed by 350 commercial applications and so used by two million designers. It handles defeaturing, advanced meshing, constraint management, and more.

New in R25 is feature matching (or face matching). This is useful for matching faces in the same process over and over, such as in link chains or crankshafts; it reduces the time needed to make designs with repetitive elements.

Also new is shadow projection, which is useful for CAM applications to calculate the direction of the cut. It's like shining a flashlight onto an object and seeing the shadow on the wall: the "shadow" determines the cut, such as from water cutters.

That's really interesting. It looks like it has strong support for model-based-definition, independent of the CAD vendor.