« This week in upFront.eZine: We analyze what Bricsys and Graebert are doing right | Main | fotos of the sunday: One day in Barcelona »

Logitech removed double-clicking from its mice; here's how to get it back

For my 3.5-week trip through Europe this month, I look along my trusty three-year-old ASUS Android tablet and my brand-new Lenovo Windows 8.1 ultrabook, one of their Yoga models. The Yoga has three input devices, and none of them is just right for me:

(For the record, I found that the Lenovo handily replaces the ASUS, even though it has half the battery life, but this is overcome by the Lenovo keyboard, which is so superior.)

I decided I also needed a mouse, because still too often a mouse does what trackpads, pointing sticks, and touchscreens cannot. I wanted the following specs:

In Hamburg, I went to the Saturn store (Germany's BestBuy) next to the main train station (Hbf). In that five-story electronics superstore, I found just one mouse to fit my specs. And in only one color, black.

(It seems to me that this chain of store is now carrying less stock -- and fewer interesting items -- than what I experienced during my visits in years previous. Much of the computer floor is today taken up with brand-specific mini-stores, which could explain the dearth of variety. Anyhow, mini rant over.)

And so that's I ended up with Logitech's M557 mouse. It has one new feature: a Windows-logo'ed button meant to mimic the new Windows button found on on newer tablets. Fortunately, the button can be reprogrammed. Little did I know how much programming would be required. 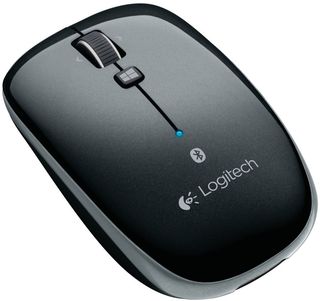 Bringing Back the Double-Click

When I install a new mouse, the first thing I do is program Double-Click to one of the buttons. But this mouse's version of the Logitech SetPoint utility software excluded the option. Wha'? There were all kinds of operations I could bind to buttons, but not Double-Click.

Logitech had removed it. Fortunately, geeks on the interwebs figured out how to add it back in. It turns out that Setpoint reads an XML file to determine the options available to a mouse. I could return the double-click by editing the file.

(An alternative method is to install an older version of Setpoint; I did not try this option as I read that newer mice don't work with older Setpoints.)

On a Logitech forum, users began last December venting their dismay at the loss of double-click. Logitech staff were unhelpful. See http://forums.logitech.com/t5/Mice-and-Pointing-Devices/Setpoint-quot-Double-Click-quot-option-doesn-t-work-anymore/td-p/1150213.

But then in June, customer JaTeK figured out the solution. I implemented it, and it works. Here is what he wrote:

I've found workaround. In the configuration file located in the folder:

You can change assignment for the key of interest, like this:

After that, you need reboot computer or restart SetPoint and have fun with your favorite double-click!

It works, because Logitech's programmers didn't remove the functionality, but only hid it. Thank you very much, because old version of SetPoint doesn't work properly with the new modern M557 Logitech mouse.

And this is why I have come to hate upgrades: loss of productive functionality.

Thanks Man!
It worked! Although, with my m325 logitech mouse, even after a restart I still had to open up set point and click the apply button. It's pretty astounding to think that logitech would remove the double-click function, as a programmer I don't think I would get far without it.

In retrospect, I suspect it was probably some inane command from the high-ups which is why they simply hid it as opposed to removing the functionality.

Once again, thanks for posting this!

Another "Thank you for this!" I gave up on Setpoint for over a year, and tried to make do with a couple of hacks, but they weren't particuarly satisfactory. This is now working beautifully.

Thank you soooo much! I can't stand having to actually double-click when that is what the middle button really should be doing!! ;)

My good man.. I found this for my Father who is becoming older at a rate that is far too fast. I try to do everything I can so that he can continue to use his computer as long as possible. Everything is becoming more difficult for him.. and although I do not understand why losing the double click functionality is so bothersome.. I see now that it is. And I am getting better at accepting things without understanding them.

Thank you dearly for helping me to help my Dad!!!

You are to both him and me, a Hero!! ( and it is proper to say him and me, he knows and taught me grammar , and for anyone reading that last part.. pls know that that was intended to honor my him, my Dad.. and nothing more, nothing less )

as I was saying, we are in Your debt... thank you kindly!!

Many thanks for providing a solution to this annoying problem :)

Hi,
Is there a specific way to apply that fix in Windows 10 (x64) Pro? How to find the said folder?
Thanks
J-P

Thank you so much for this! I wasn't aware of the change, and when I searched the logitech forum I didn't find the relevant information. I posted over there about not being able to set double-click, but got no replies (probably for obvious reasons....)

I have two Logitech Performance MX mice, both of which were giving trouble: The left-clicks were random - working sometimes and not others. Neither of them would double-click.

So I bought a new mouse, M705, and found to my surprise that it wouldn't double-click either! So I searched and found this webpage and did the modification on Setpoint\user.xml. But after rebooting, none of the three mice will double-click. Maybe I got something wrong.

Because the posting showed '' as the section to modify, that is what I did. I substituted in the places where it was highlighted in yellow. So that the section now was:-

Is this incorrect? If so what should it be?

NOTE: I have deleted the forward and backward arrows as the lines containing them would not show in the Preview.

Thanks for any help!

How to make works with Logitech G502?

Hi, thank a million!!
it's work well also with logitech T400.
thanks again.

I'm wondering if this trick also work with Logitech T620 and T630.
plan to upgrade to these mouse.

I tried to do it, but it doesn't work.
In my user.xml it's slightly different, it looks like:

And for my simple M185 mouse the trick doesn't work unfortunately.

I don't have setpoint installed on my G502 !

I do have logitech gaming software installed, bud there i can't find any user.xml file ?

Is there an other workaround for the gaming software?

Logitech's line of gaming hardware (mouse, keyboard, etc) has quite different utility software from its regular line. More features for gamers, fewer for those of us used to what SetPoint offers.

Thank you so much for this. The ability to bind double-click to the middle button / scroll wheel click is what has made me buy Logitech mice over any other brand. Shame on them for removing it!

This problem can occur when SetPoint is updated, overwriting your
customized XML file. Don't update SetPoint!

I created this xml file several
months ago and it let me double-click using the wheel on my M510 for
several months. Recently, it stopped working and can't get setpoint to
use wheel to double-click anymore..

Logitech must have installed an update on my computer that has permanently disabled the center-button double-click capability. My M325 recently stopped double-clicking and resetting the user settings has no impact on that function. That double-click function must have been a terrible feature for Logitech to go to such extremes to prevent that function... I'm very annoyed that it's blocked.

You are right: it would have been disabled by an updated that Logitech pushed onto your computer.

I wonder if Logitech convinced themselves that double-click is dead, since there is the option in Windows to single-click instead.

THANK YOU SO MUCH!!!

This is literally the ONLY resource I could find on how to trick my M325 into using the scroll wheel tilt as a double click. My old M510 died and I replaced it with an M325.

To overcome the push update issue, once I got it to work, I copied the XML and gave it a different name. Whenever the update happens, I just delete the new XML and use the copied one.

Although my XML was a bit different, but here is what worked for me (M325):

Worked great for me. Thanks! I had to go back into SetPoint after the boot and press the apply button before it started doing something.

My process was to pull up SetPoint and change Middle to Other and selected the Do Nothing option then pressed apply. That created the users.xml file in the indicated location under my Users folder. I then modified the button 3 section to match what is above... the only thing I had to modify was the word "DoubleClick" in place of "DoNothing" and the section was completely replaced.

I have an M525 which I picked up yesterday. The idea of removing double-click from the middle mouse button mystifies me. I don't understand why they would do that.

Another way to do it is through hotkeys from this link: http://forums.windowssecrets.com/showthread.php/168848-Logitech-M310-Mouse-Double-Click-Re-visited

Always have this double clicking issue with logitech mouse no matter how expensive it is. I think logitech should look into quality control of their micro-switches.

Just went thru this same situation when I had to replaced my +5 year old M305 (left button stopped working) with a new M325 and discovered there was no longer a "Double Click" option for the middle button.

The solution of changing the user.xml file worked but, being a stubborn cuss with fairly extensive programing knowledge, I decided to see if I could figure out how to add that option back into SetPoint's drop-down menu.

Well, after looking thru all the files in the SetPoint directory, I found a very simple trick that does exactly that.

Double Click will now show up as one of the available options for any of the mouses programmable buttons!

Big Al's method did not work for me. win7. new logitech m100

never mind.. now it works! thanks!

There is always X-Mouse to supplement the missing button assignment options. My G603 can do everything I need except the double-click on the middle button, so that is done via X-Mouse.