« Hooking BricsCAD up with CAM | Main | Update on BIM by Bricsys »

From the inventor of Microstation TriForma

This is the time a lot of us have been waiting for. What will Bricsys show us in the area of BIM. First off, a movie that shows now new AEC software constructs buildings using direct modeling, and a lot of the new functions we saw earlier today in the V15 announcement. So far, we are seeing just an architectural application of solid modeling -- more than what Dassault seems to have been able to do to date.

BIM is limited to IFC export. However, DWG is used as the base file format, and so it is more compatible than Revit.

"Maybe a disappointment for some," Pieter Clarysse, our demo jock starts. "Not a lot of toolbars or commands for BIM. But we wanted to keep things simple." 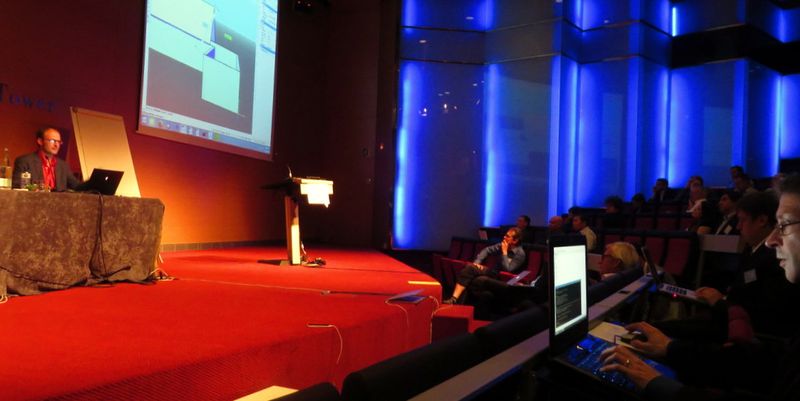 For instance, he uses PolySolid to create 3D solid walls. Well solids, not walls, the demo jock reminds us. So, how will he show the characteristics of the walls, such as insulation, studs, gyproc, paint color, R-value... ?

The Quad cursor is well used to modify the wall lengths and positions, because the Quad can be customized to react to specific entities in specific workspaces. (This means the Quad would react differently to polysolids in sheet metal workspace than in BIM workspace.)

Press Ctrl while lengthening a polysolid to make it jump to the nearest wall. To connect walls (to connect two arbitrary solids), use the new command (didn't catch its name); use the new widget to determine which kind of wall intersection to apply.

Roofs members, for example, make good use of the new lock angle tracking function, both to define the slope of the roof and its overhang. Now we are seeing how roofs can intersect: with the new command for connecting two arbitrary solids. 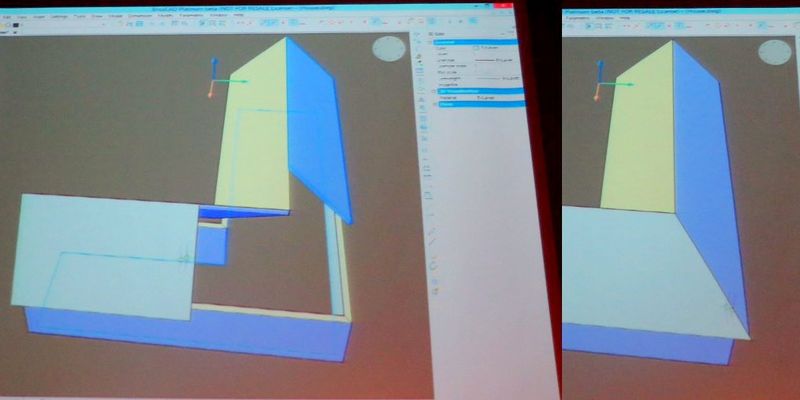 "Windows and doors are from DWG libraries, nothing special going on," says Mr Clarysse. "There is no dialog box for creating types of windows, but with parametrics you can create anything."

To insert a round window, he uses the BIM_SUBTRACT layer. The window is defined by a round cylinder that creates the hole. Another example, he says, would be a window with tilted glass. To do this, he opens a new drawing window to define the window, and then insert it as a block in the wall. Glass is transluscent. Drawing plans can be generated from the 3D model. Use parametrics to open and close doors from the Properties palette.

Well, we are not seeing BIM here, as the walls are only polysolids with holes for doors and windows. The demo jock reminds us that we need to first create the 3D model before adding information. He clicks a button to add information to the walls -- through attributes? -- such as their building material. The walls look no different, as they are still polysolids. Properties are reported and modified by the Properties palette.

"So now the second life starts, let's export this drawing to IFC," he says. IFC is the format used to exchange data about buildings between different programs. He opens the IFC file in SimpleBIM, and it displays the object names, properties, and 3D view of the house.

"We cannot complete BIM on our own; we are cooperating with two others on the data to store," he concludes.

"We have a slightly different view from our competitors," adds Erik de Keyser. More details after lunch, we are promised: their BIM strategy.

Posted at 04:41 AM in Travelogues | Permalink