It's getting towards the end of the Bricsys International 2014 conference, and we are being treated to a early preview of the 3D CAD viewer that's being added to Chapoo. The 3D models we are seeing are being streamed from a server from the head office in Belgium (we are in Spain).

The viewer slices the model to see inside, and it also does more than one slice plane -- live sections that can be moved around in real time. Naturaly, there are standard viewpoints, as well as perspective mode. (The programmer is giving the demo, who reports he was writing code for it while sitting in the audience during this conference.) 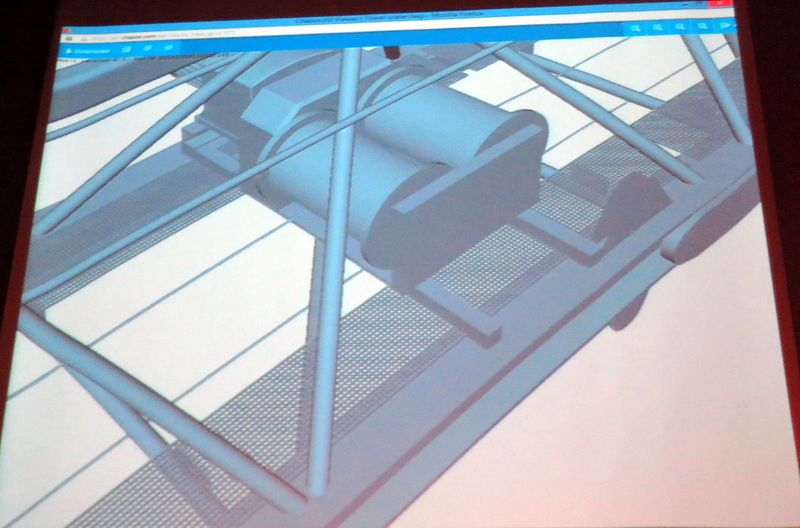 If you upload a STEP file to Chapoo, it is converted to DWG automatically. Unlike other viewers, like the once from GrabCAD, Chapooo doesn't need to download the entire model before we can view it. It has LOD (level of detail) so that zooming in shows more detail.

The viewer is written with Unity and compiled with Mono. They are waiting for Unity 5, which will publish to WebGL, meaning no plugin needed for Web browsers. It also publishers to mobile devices like Android and iOS.

It takes measurements, and reports areas and volumes. Can choose all similar objects, like cylinders. Can select individual faces and make them transparent -- or even delete faces (just press Del). Will be getting annotations, and annotations for sliced planes.

This technology is not yet available, but is still being developed. "This is just the core technology; we still have to add lots of things, like the mechanical structure tree and BIM-IFC information. I think we can agree the base technology is looking OK!"

Posted at 09:02 AM in Travelogues | Permalink

I wonder if the DWG file that gets created is a visual representation or if it is a true Brep CAD file. It's impressive that they can do this via Unity and mono, but what are the true CAD implications, or are we just talking about polygonal data here?
The Visrep data is handy for visualization but not the best for measuring, and definitely not useful for doing CAD work like adding features and building assemblies, etc.