« Here’s what’s planned for 3D in BricsCAD V16, next year | Main | Hooking BricsCAD up with CAM »

For Windows, Linux, and now Mac 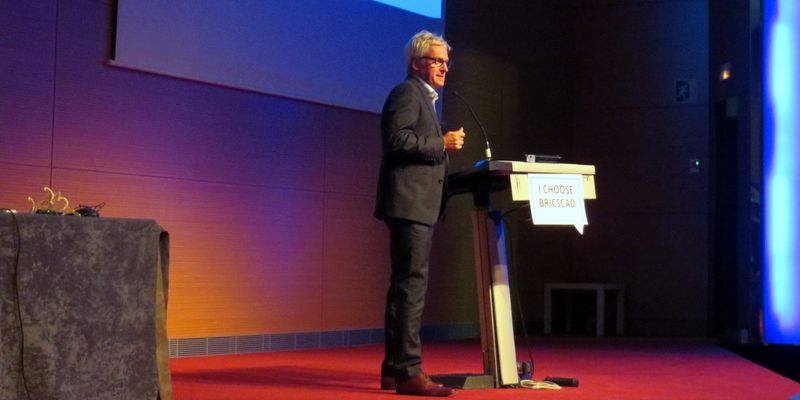 The new day is starting, and now its time to hear what's new in the next release of BricsCAD, V15. Hans de Backer is head of product development, and is in charge of the core code that makes up the CAD program.

Under the hood, he updated wxWidgets from 2.9 to 3.0 (primarily to support the Mac version), Teigha 3.9 to 4.0 (Bricsys supplies 1000 to 1500 improvements to it), and RedSDK from 3.2 to 3.4 (rendering engine). Natalia from Russia is recognized at the key programmer for the core; during a break yesterday, she told me she has worked on BricsCAD now for 14 years. 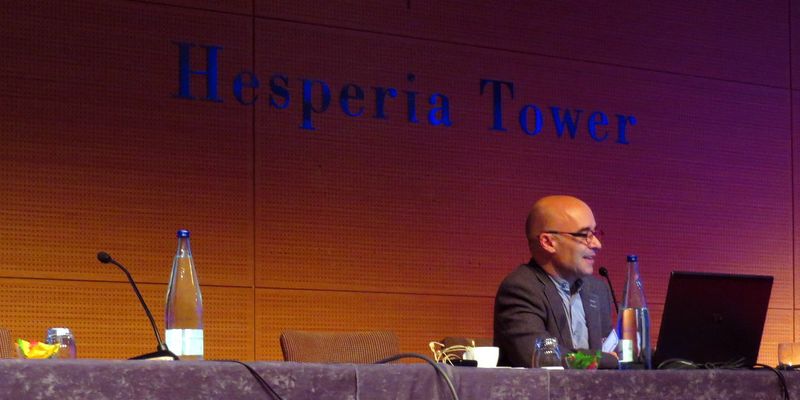 In the user interface, the ribbon is new, and can be customized. The workspace is now saved to the CUI file, unlike AutoCAD; use the WsAutoSave setting to determine if this happens. Document tabs let us quickly switch between drawings.

MText now has a ruler for setting tabs, margins, and indents. Clipboard text can be pasted directly into mtext.

Grip editing on hatches and edges of polylines.

Real-time boundary detection, currently mainly used in 3D (for finding extrusion areas) but will be added to 2D

Warnings when attached files are missing or modified externally; new variables for xrefs, images, and PDFs; set duration for notifications

Perspective views improved, such as with a new horizon; zoom to extents in perspective mode; and more; see figure below: 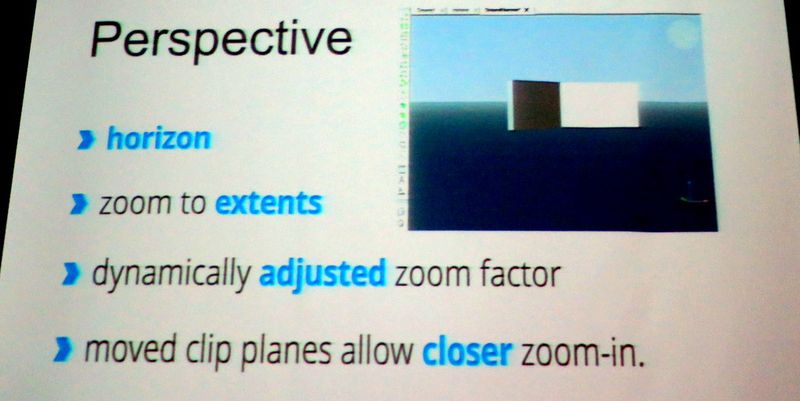 Printing has the None printer device for drawings set up for printers that are not available; this device supports all formats; useful for exporting to PDF, since it is not limited by paper sizes.

Web map services offers dynamic map underlays <- this is currently work in progress, because this is a new subject matter for Bricsys

Isolate objects with new HideObjects command; or hide all objects except for the selected one; and then unisolate. Use new ObjectIsolationMode to keep objects hidden for the next drawing session

New widget that will be used for more and more commands. Currently for selection modes and polysolids. Yes, there is a new Polysolid command, but unlike AutoCAD, BricsCAD has the Separate option for making individual walls; the Dynamic options sets height and width on the fly. 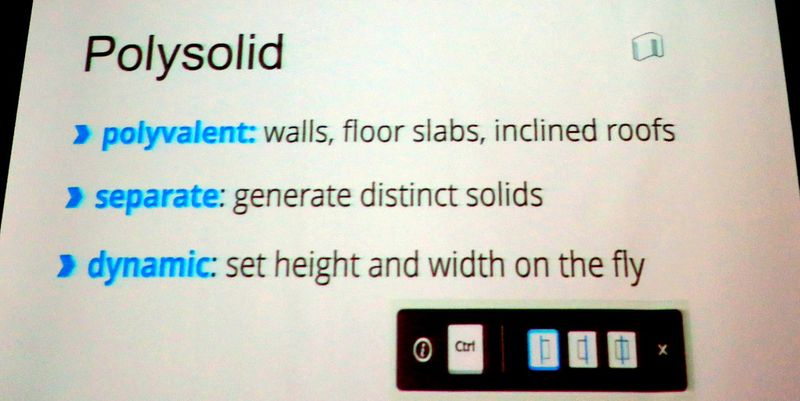 600 materials added to the rendering engine.

We are now seeing the new commands in action. In the image below, we see edge detection locating the 2D wall outlines, the polysolid command creating 3D walls, and the new options widgets (at the bottom). 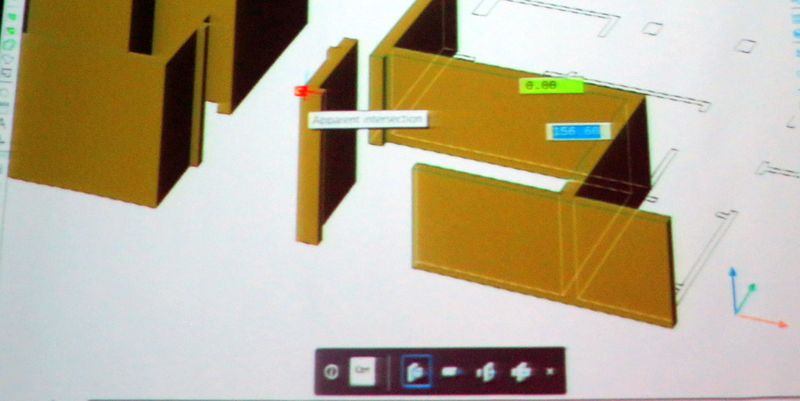 Sorry about the blurry image; the conference center's projector is old and blurry.
Notice the new widget at the bottom of the screen for revealing Ctrl-key functions

The demo jock loads a multi-hundred MB image file, which we see load in seconds; he says it would take several minutes to load in AutoCAD. Exporting the drawing as a 27-page PDF, the resulting file is 55MB; in AutoCAD, the same drawing exported as PDF is nearly 1GB in size. The PDF driver is part of BricsCAD, and is not a third-party one.

Maps loaded from the map server are available in common mapping coordinate systems, such as CRS84. The selected map is loaded over the Internet, and then placed in the BricsCAD drawing. Can place multiple maps in a single drawing, each on its own layer. Remember to use the same projection system! Can add as many maps as we want; the maps are updated dynamically as we pan and zoom. 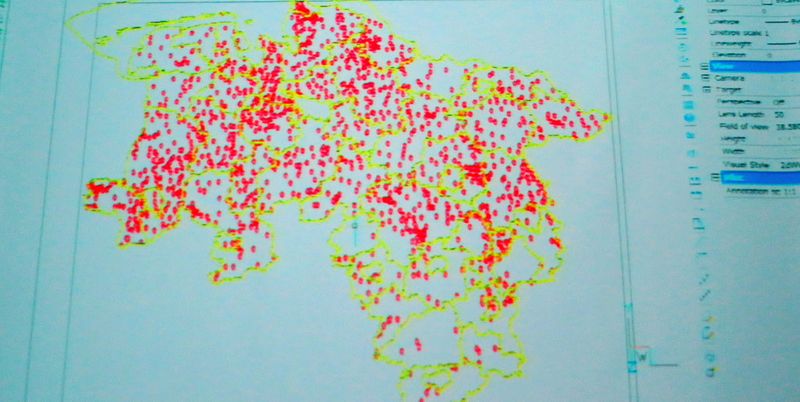 The map function is a work in progress, and more features will be added during the life of V15. Bricsys normally releases a new update every few weeks during the year between major updates.

Now we are seeing dynamic tracking. Hold down the Shift key to lock a tracking line; enter a distance or project any point, which will be projected perpendicularly. (I wish I could show photos, but the image is too blurry.) Similarly, you can lock the angle of a trracking line. AutoCAD does it differently, he says, "And we don't understand why."

High-resolution materials are also downloaded from the internet, for the new rendering engine. Problem is, this won't work when there is no Internet connection. This is, however, only the first step. Next stage is to allow users to specify their own materials "based on DWG." 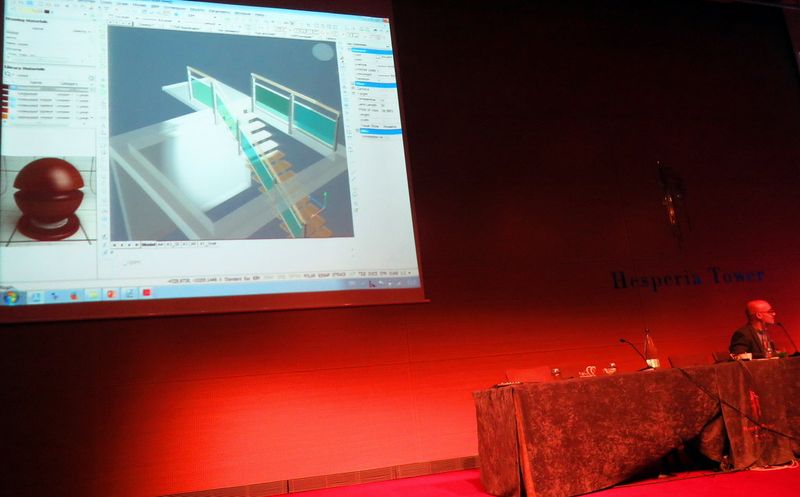 Scrolling through materials for 3Dk renderings

During the Q&A, some attendees asked for better display quality of 2D images. The demo jock showed two new variables that add anti-aliasing to 3D and rendered display modes.

Another complained of the slow speed. According to his benchmarks, BricsCAD is 4x slower than AutoCAD.  The speed is a function of many variables, such as graphics boards, hardware, drivers, and entities in the drawing. The complainent is offered the opportunity to provide his drawings to Bricsys so that they can analyse where the slowdown occurs.

Another asked for creating dyanmic blocks. This is a difficult problem, says Erik de Keyser, and they have some plans for their own kinds of parametric blocks. Part of the problem, he hints, lies with the APIs provided by the ODA. I get the feeling that an AutoCAD-style dynamic block editor might not be in BrisCAD for a long time, if at all. AutoCAD's dynamic block editor is like its own entire miniature CAD system.

Posted at 01:55 AM in Travelogues | Permalink