The first cheer of BIC

We are now into a trio of third-party developers, who are pushing BricsCAD to its limits. First up is Wildeman, a German developer of land development software. They got the first cheer of this conference by showing real time rainfall and water flow on a DTM [digital terrain model] file.

As the developer said, "Doing just plain DTM is pretty old by now." See photo below. 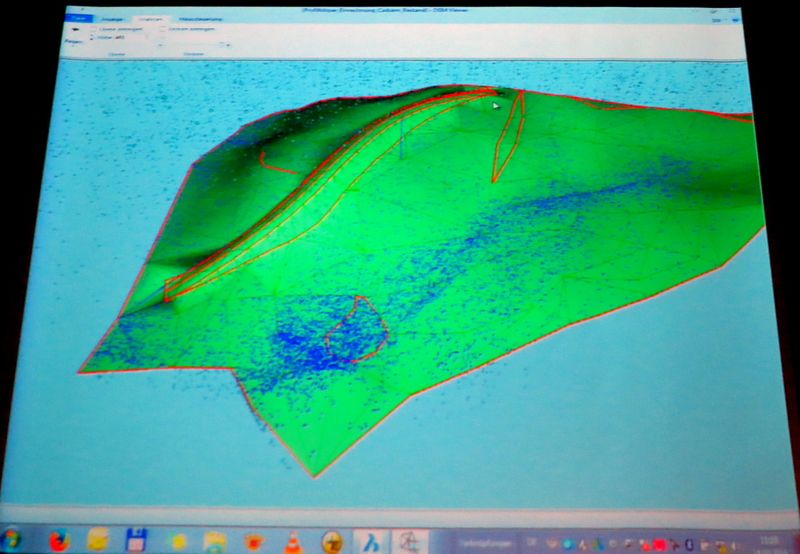 Blue dots falling from the sky represents rainfall, for which a variety of parameters can be determined, such as rain density, height of clouds. Blue dots on the ground is the water movement. The demo jock showed how he then designed the water retention pond, and how BrisCAD animates the filling of the pond

Next up, Owen Wengerd, who manages the OpenDCL project and also has his own company, Manusoft. (He is also a contributor to WorldCAD Access.)  Today at BIC, he is showing his own installer for installing LSP and BRx apps in Windows-based BricsCAD environments.

He is giving a live demo of the five steps to create the installer:

It works with 32- and 64-bit versions of BricsCAD, and goes back to V9 (as well as AutoCAD 2000). It also installs the unistaller.

CGS Plus d.o.o. from Slovenia is showing off their software for civil engineering, architecture, GIS< and ITS. They started in 1990 with AutoCAD Release 9 and by 2005 were Preferred Industry Partners of AutoCAD Civil 3D. "We then had some tough years, as Autodesk wants to own our space," we hear from the presenter.

So in 2012, they ported their software to BricsCAD and now are doing much better. "We are speeding up [financially]." They have now 4,000 customers in 50 countries.

He lists the Application Developer's Wishlist:

During a demo, we see realtime movement of vehicles to find horizontal and vertical clearances with their AutoPath software. It works on BricsCAD V12 through to the new V15. They ported 120 ARx routines, ten .Net ones and some LISP routines from AutoCAD to BricsCAD smoothly. "We can handle roads longer than 300kn, which Civil 3D fails at."

Posted at 02:58 AM in Travelogues | Permalink