Some users and many tech sites bemoaned Microsoft's "removal" of Windows Experience Index (WEI) from Windows 8.1; it was not removed.

WEI is still there as a command-line utility; what Microsoft removed was the dialog box interface. And so a number of entrepreneurs wrote free utilities to bring it back.

WEI tests the speeds of the CPU, RAM, graphics devices, and hard drive, and so I find it useful for seeing where the bottlenecks are. In fact, I wish all computers sellers would post the WEI next to each computer on display so that we can buy the optimal one. The workaround, I suppose, is to buy one, run WEI outside the store, and then return the unit if its hardware proves is sub-optimal.

To test WEI on my two Windows 8.1 devices, I downloaded, installed, and ran WEI Tool from Winaero at http://winaero.com/comment.php?comment.news.220. 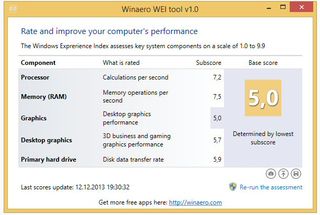 The results were revealing (numbers out of a maximum of 9.9):

The bottleneck in the Sony tablet is its low-end, underpowered Pentium CPU, while the use of the i5 CPU shows up well in the Lenovo ultrabook. The very low 3.7 score explains why the Sony tablet struggles at times to launch and run apps -- even though this is 2014. I predict that the new under $200 Windows 8 tablets will run poorly, because they have to use slow components to keep the price down.

(For comparison, I include the numbers from my primary work machine, an Acer desktop with a 3.1GHz quad-core i3 with 16GB RAM, nVidia 2000 graphics board, and regular hard drive.)

The remainder of the scores are similar:

(TIP: WEI Tool does not run when the computer is on battery power.)

"I predict that the new under $200 Windows 8 tablets will run poorly, because they have to use slow components to keep the price down."

It's not necessarily so. I recently bought a Toshiba Encore 8" Windows 8.1 tablet - it's just about the cheapest Windows tablet available in Australia at the moment. (Available for AU$249 in main-street "bricks and mortar" retailers, and probably even cheaper if you shop around.) Note that this is the original "Series 1" Encore, not the newer Series 2.

My WEI scores are:

Not bad for a cheap tablet!