« This week in upFront.eZine: Simmering law suits | Main | foto of the sunday: Galiano Island as seen by a fish's eye »

...and why I replaced its SSD drive

A couple of weeks ago, I saw a Lenovo Yoga at Staples, fell in love with it, and bought it a few hours later at a sale price of $1,050 for my birthday. It's one of Lenovo's ultrabooks whose screen rotates 360 degrees -- from laptop to tent, to reverse laptop, to tablet mode. Feels solid, real solid.

(There are quite a few different Yoga models made by Lenovo, so your's might be quite different.) 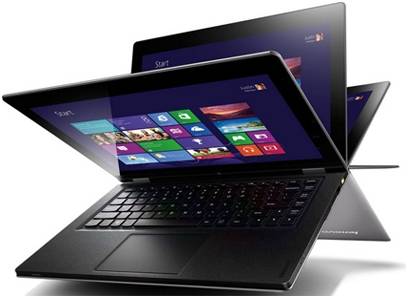 It's got an i5 CPU, albeit only two-core and only 1.6GHz. But this solves the speed problem I experienced with the Sony Tap 11, which has only a 1.2GHz Pentium.

The Yoga has some flaws, but when I found that the keyboard is backlit (my first on a laptop), I decided to keep it. (Turning on the backlight requires me to press Fn+Spacebar, which is why I didn't first notice it.) The keyboard is really good for fast typing.

12.5-inch 1920x1080 screen; responsive to touch, unlike the Sony. Battery life is just under 6 hours. Two USB 3.0 ports (one powered, even when the computer is off), SD memory card slot, miniHDMI, and a port for an external dock. Trackpad and bright red pointer nub (which I've never liked using). Yoga uses Lenovo's new proprietary rectangular power plug, making it harder to use with third-party power supplies.

When in tablet mode, the keys draw into the keyboard, making the area flush. Also aiding tablet mode, there are hardware volume buttons on the side, along with a lock button that keeps the image on the screen from rotating. A software utility written by Lenovo lets me specify the screen orientation in its four laptop-tablet modes.

It runs Windows 8.1, but this problem can be cured by installing the free Start 8 utility. It returns the Windows 7-style Start button, and keeps the Metro interface from appearing.

Lenovo reversed the locations of the Ctrl and Fn keys (irritating), but they can be swapped in the BIOS, but this eliminates the Fn lock function. When touch typing, I appreciate the swap; when looking at the keyboard, I get confused. Lenovo just should put the buttons in the correct locations to start with.

A stylus comes with "certain models only." (Why?) Where the stylus is supposed to go, mine has a plug that looks like the top of a stylus. Argh!

Main drawback: although the motherboard supports 16GB, this one comes only with 4GB -- soldered in! So, I can't upgrade the RAM. OTOH, less RAM means lower power consumption.

The hard drive is 128GB solid state drive, user-replaceable. Between the 1,000,000-byte definition, 10GB set aside for recovery, and Windows taking up 40GB, there isn't much room left for something that should be a workhorse mobile computer.

Lenovo's warranty software indicated it had begun last December and so would run out in less than a year. I contacted Lenovo, who replied from Argentina and asked for my sales receipt. Upon receiving it, they updated the warranty, which I probably violated by replacing the SSD. It seems that a mistake in the system caused the warranty to be activated the date the computer was manufactured, instead of waiting for the date it was purchased.

Did you know that 128GB SSDs are inherently slower than 256GB (and larger)?  It's because they contain fewer RAM modules and because SSD controllers work in parallel, so only half as much data/sec can be written to a 128GB drive as to a 256GB one.

I discovered this after I wondered why my new Lenovo Yoga sometimes stalled -- even with the i5 CPU. I happened to check the specs of its 128GB SSD, and found it writes data at only 150MB/sec -- more 3x slower than most SSDs. It was probably a cheap model to cut the cost of the Yoga. Even the Sony tablet has an SSD with better specs.

1. Take out all the screws.

2. Insert your fingernails in the gap along the hinge area, and pull out. 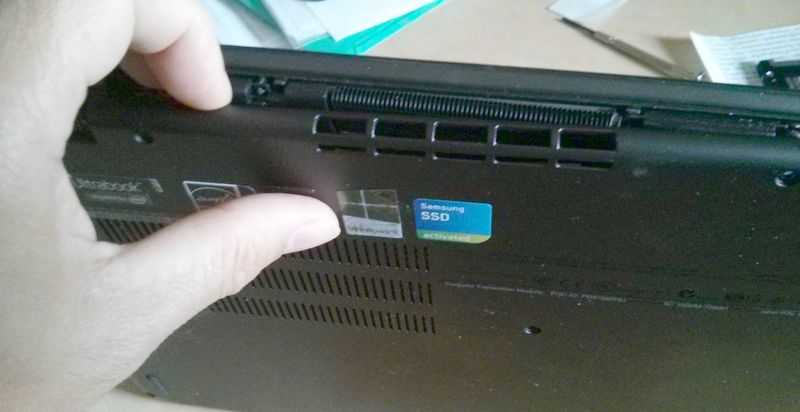 3. Unsnap the front of the casing. The SSD is held in with two screws. (While the case was open, I took the extra time to remove the stylus plug. I needed to remove a motherboard screw to get the stylus out. I then ordered the actual stylus from the Lenovo Web site.)

Samsung provides software  that clones the drive, as well as Samsung's "Magician" software that optimizes the new drive after it is installed. Magician also performs benchmarks, and optimizes both the SSD and computer to max out its speed. 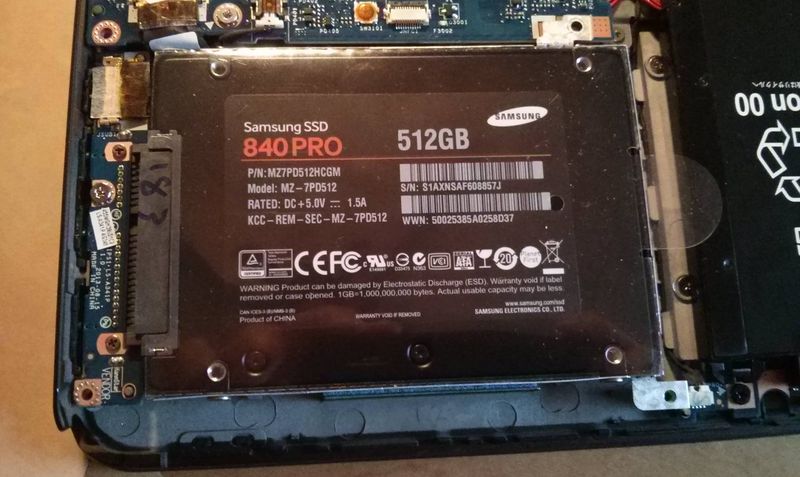 So, I guess our friends at Intel are right: spending our money on a fast SSD drive (cost me $388) is more effective than on a graphics board.