Bringing our 1970s stereo systems into the Bluetooth era 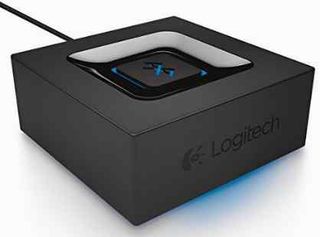 In my office, I sill use the Marantz stereo receiver that I bought in 1976 during my university years. I keep it up to date by hooking it up to an Internet radio.

In our living room, we have a Sony mini component stero system that probably close to 20 years old. To listen to Internet radio, I sometimes run a cable from the MD input connector (Sony-ese for AUX) to my phone. Not that convenient.

I had heard about Bluetooth audio adapters for stereo systems, and I wondered if this would make life more convenient. From the local BestBuy I bought Logitech's Bluetooth Audio Adapter, #980-000910. At $50, it was more expensive than models from other companies, but I wanted a Bluetooth connection that worked -- so many don't.

The box is small, about the size of a large postage stamp. It's made of ruberized plastic, so it won't slide around on smooth electronic cases. A button on top turns the Bluetooth connection on and off. The blue LED underneath glows steady when the connection is made; it flashes frantically when there is no Bluetooth connection.

The package comes with an audio adapter cable, RCA plugs at one end, 3.5mm plug at the other end. You can use any spare cables that work, such as RCA at both ends or 3.5mm plugs at both ends. I used my existing 3.5mm cable. You can hook the little box up to any stereo with an input, or to powered speakers.

It also comes with a 5V power supply. This is the one design flaw: the connector is a round pin. It would have been better if Logitech used a microUSB, so that any 5V source could be used -- even a computer.

Anyhow, it works pretty much perfectly. I tested it with a Windows 8 tablet, an iPad, and an Android smartphone. Turn on Bluetooth in the tablet or phone, and then tell it to search for a nearby Bluetooth device. When the Logitch name appears, select it. 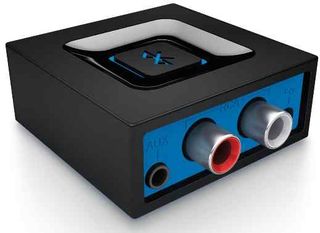 At the rear, from left to right: 3.5mm output, RCA (red=right and white=left) outputs, and power plug;
the connect-disconnect button can be seen on top

TIP: How to Use The Adapter

There are no written instructions with the Logitech device, so here is how to use it. Important! Bluetooth handles only one connection at a time. Here is how to switch to another tablet:

1. Press the button on the Logitech device to disconnect the Bluetooth connection; the blue status light flashes slowly to indicate it is disconnected.

2. Then press the Logitech's button a second time so that it can search for the new tablet or phone with which to connect to; the status light flashes quickly to indicate it is searching.

3. Make the connection on the tablet; the status light glows a steady blue. As well, the Logitech device makes a tone through the stereo so that you have an audible confirmation of the connection.