« Autodesk Flow Design, the easiest-to-use CFD program ever | Main | "What Do Journalists Pay for Free Trips?" »

As computers get thinner, designers are forced to make keyboards more dreadful.

Microsoft's Surface is the worst of the lot with its thin, "touch-sensitive" cover that features a keyboard with no moving parts. Type much? By contrast, the best keyboard I ever experienced on a portable device was, oddly enough, on LG's only netbook; man, my fingers could fly!)

For professional writers who rely on quality keyboards to efficiently get through our days, these changes represent a quadruple whammy that holds us up, and so thin keyboards are unacceptable.  The better the keyboard, the faster I get my work done, the sooner I get paid.

(For my desktop computers, I now use Logitech's corded Illuminated Keyboard, about $100.)

Space-saving keyboards don't have to be awful. During the era of the Palm Pilot, Think Outside made the Stowaway keyboard that folded into quarters, yet had decent key travel. When folded up, it was the same size as the Palm. Companies like Thanko tried to revitalize this form factor, but folded financially, unhappily.

The problem hit home when I got Sony's Surface-class Tab 11 tablet. It came with a very thin keyboard that acts as a screen cover; it communicates through BlueTooth, has flat tops, and almost zero travel. (I got the unit in the USA, so no dual-language keys, fortunately.) 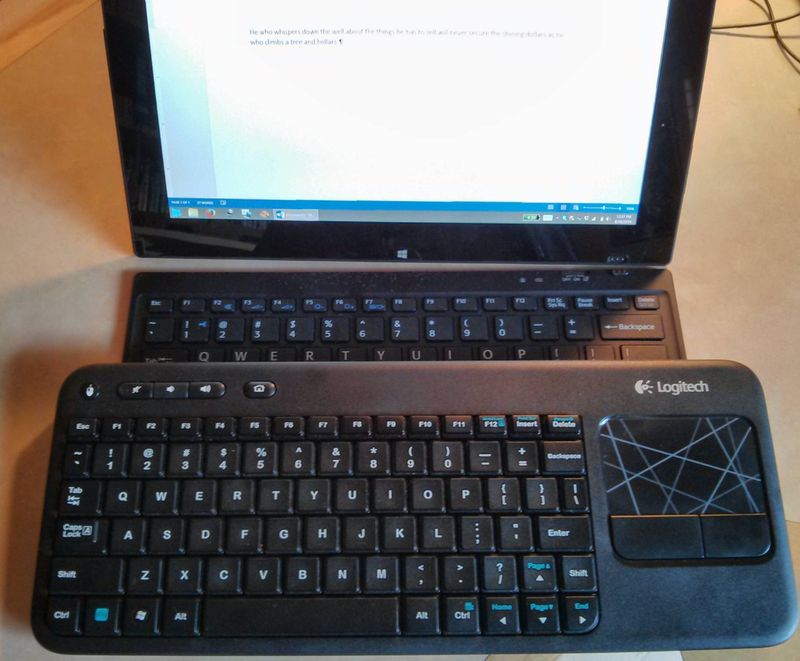 At the top: Sony Tab 11 tablet (with 11" screen);
Below it: the skinny, unusable keyboard provided by Sony
At the bottom: the barely larger Logitech K400 keyboard

It is in black or white. The almost-identical-looking K400r model has a small set of different keys, so examine them both to see which model you prefer.

Different designs of portable keyboards are available from other manufacturers, but l like the Logitech because the trackpad is on the right, where I would naturally use a mouse. Other keyboards place the trackpad below the keyboard or lack one entirely -- or cost a lot more.

My opinions and notes:
-- I have the Stowaway keyboard, and it still works fine. It's not good for heavy typing, but better than a display.
-- The best laptop keyboard I've ever used is the Thinkpad X61t's. It feels wonderful. The Thinkpad T41 keyboard is also wonderful. However, I have a USB Thinkpad keyboard (with pointer stick and trackpad) and it's just OK -- I think the extra weight of the laptop makes the keyboard better.
-- For desktop keyboards, I prefer tenkeyless (narrower) keyboards, because they reduce my RSI (less distance to the mouse or trackball).
-- For a great typing experience, mechanical is the way to go (but they're too big for laptops). I have some rubber dome Unicomps, and while they're better than the vast majority of keyboards, they're not close to a mechanical keyboards.
-- My current mechanical lineup is a CM Quickfire TK Blue ($65 new), QuickFire TK Green ($65 eBay), and a Unicomp buckling spring model (unfortunately full size, $50 eBay). The TK's are my favorite, because of their small size and backlit keys, but they are all good quality keyboards (heavy, good construction, good feel). I still haven't decided which touch I like best; the TK Blue has a fairly light touch, while the TK Green and the Unicomp have a heavier feel.

Do you have short stubby hands or what? I have absolutely no trouble reaching the left shift key with my pinky, even on my full size desktop French Canadian keyboard. Seriously, it looks like you never miss an occasion to complain about this non-issue.

For decades we native French speakers were stuck with US keyboards with a key missing, I certainly won't complain that we can get proper keyboards somewhat more easily now. Now if only they were Canadian Multilingual rather than French Canadian.

Yes, I have short fingers, as you surmise, and so the problem is real.

(My wedding ring is very narrow, due to the near lack of space on the ring finger: between the knuckle and end of finger.)