Our new home phone is a cell base station

When we first moved to this town, the local phone service was cheap: $11 a month, because we could only call two nearby, smaller towns without incurring long distance charges. Then the Canadian telephone regulator got the brilliant idea to allow competition among home phone service providers. This was going to be great: an even lower phone bill!

The regulator's plan failed spectacularly for two reasons. The local monopoly phone provider asked for, and received, a more than doubling of the price to compensate for the extra costs it would incur competing against newcomers. (Huh?) Now we were paying $24 a month, instead of $11. And then all other phone providers decided that there were not interested in local home service, because of the high cost of servicing individual homes. The high prices stayed even though the competition disappeared.

Subsequently, the local monopoly service received permission for further price increases, now costing us $35 and soon to be increasing again -- for the same dismal service. So in Canada we have low business phone prices, low long distance prices, and high local phone prices. Just last week I read that 21% of Canadians no longer have line lines, just cell phones; the high cost is one reason why.

Now recently, cable and internet companies began offering VoIP phone service, but took advantage of the high local phone rates to price their service nearly as high -- $25 is typical, instead of the more usual $10-$15 found elsewhere.

I looked into it, but the thought of saving only $10 was not worth the disadvantages. We have all experienced poor phone quality with Skype, and I didn't want to be stuck with that on my home phone.

Last week I noticed that my cell phone provider was offering a limited time special: $10 a month for home phone service, with free long distance across Canada, free voice mail, free caller ID, and a few more free services (that I don't need), with no expiry date. Regular price is $20 for customers, $30 for non-customers.

This was a pretty amazing offer. For the cost of what we spend on long distance (about $10 monthly) I'd get a home phone and long distance -- saving me about $420 a year. There were just some catches: no faxing and no dial-up Internet any more. 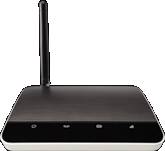 The service uses an LTE cell base station that consists of a box with an antenna and several ports. (See figure at left.) It receives and transmits calls on LTE, as well as GSM and HSPA; it has its own SIM card. A backup battery operates for up to 1.5 hours talk time during power outages. Because it operates on the cell network, I could conceivably take it along on trips and operate it from "anywhere" in Canada. On the back are two telephone plugs, into which two telephones can be plugged.

And this resulted in the other catch: unless I could run a wire from my office to the LTE box upstairs, I'd have to give up my nice office phone. Well, I found I could run the wire, but it would look ugly. So we would have to go with cordless units. I bought a Panasonic base station with four cordless phones, making sure I got the more expensive model that allows me to attach a headset.

Next stop was the cell phone provider, where I signed up for the service. I paid $40 for the LTE base station, but then store figured out how to give me $50 in credits (not sure how!). I received a new temporary phone number, which I could use during the four days it would take the local phone monopoly to switch over my home phone number.

The delay was good news, as it allowed me the time to install the LTE base station and the new cordless phones, and then test them out -- before the local wired phone was shut off for good.

And it works great! I made test calls to my wife's cell phone, a long distance call to my mother-in-law, and then spent 20 minutes long-distance on the new phone (with the headset) helping my dad with a computer problem.

Well, I think the phone services you are using are much cheaper than any other telecommunication providers. This post may be helpful for the public to control their phone bills.